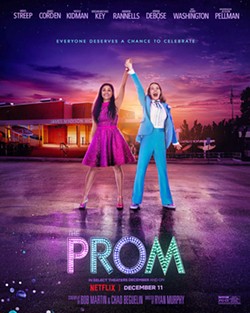 Ryan Murphy (Glee and Eat Pray Love) takes a stab at adapting the book-turned-broadway musical The Prom to a television screen near you.

An 11-hour drive away in flashy New York, three Broadway stars lament their plummeting careers. Dee Dee Allen (Meryl Streep), Barry Glickman (James Corden), and Angie Dickinson (Nicole Kidman) are three narcissists who are losing relevance and need to come up with something to put them back in the spotlight, something that will make them more likable. What's more likable than using their stardom platform to help a cause? A quick search of trending topics on Twitter leads them to Emma, their charity case. With the magic of theater glamour and liberal values, the three believe they can shake up small-town bigotry.

Several musical numbers later, you'll realize this isn't a theatrical masterpiece by any means, but it's fun, shiny, and earnest. (132 min.) Δ