Creators Scott Frank and Allan Scott helm this TV miniseries about orphaned chess prodigy Beth Harmon (Isla Johnson as young Beth, and Anya Taylor-Joy as teen and young adult Beth), whose prodigious talent comes at a price. Based on Walter Tevis' 1983 novel, it begins in the 1950s and moves into the '60s, as Beth moves up the chess ranks while struggling with mental health and addiction issues. (seven 55-min. episodes) 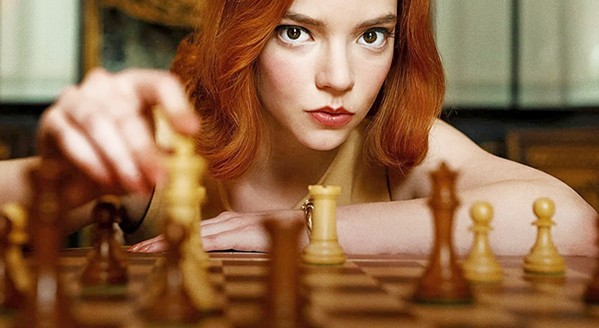 Glen This wonderfully told story moves back and forth through time, from Beth's stay in an orphanage where she befriends fellow orphan and resident bad girl Jolene (Moses Ingram) and learns to play chess from custodian Mr. Shaibel (Bill Camp), to her rise to fame as Kentucky state champ and later U.S. champ taking on Russian grand masters, and all the way back to her childhood with her troubled but brilliant mathematician mother, Alice (Chloe Pirrie). Better living through chemistry is on full display at the orphanage, where the girls are given tranquilizers to keep them compliant. These pills seem to enhance Beth's spatial intelligence, and though at first reluctant because "girls don't play chess," Mr. Shaibel agrees to teach her the game and quickly recognizes her brilliance. This "woman in a man's world" theme is explored throughout the series, and Beth learns to use it to her advantage. There's strategy in life, too, and as someone who's very inward-looking and self-contained, Beth learns to protect herself and control her environment, except when her inner demons and alcohol and pill addictions spin her out of control. You'll gobble this up one episode after another. If you've got the time, set aside 6 1/2 hours and consume it all at once!

Anna When Beth is 15, she's adopted by Mr. and Mrs. Wheatley (Patrick Kennedy and Marielle Heller). While her new father's interest in her is nonexistent, her new mother—a lonely and troubled lush named Alma—finds in Beth a new best friend and a reason to keep going even after her marriage fails. Beth is internal and odd, a nut that refuses to crack. Taylor-Joy is brilliant here, and she adeptly moves the character through her teenage years and into her early 20s. She may seem demure and shy, but the real Beth is just under the surface—biting and whip-smart and unafraid to use anger to fuel her. She may not fit in with most kids her age, but along the way she does find friends who share her obsession with chess, though none to the same degree. Harry Melling plays Harry Beltik, a foe turned friend turned sexual partner who reappears in Beth's life once she has gained some fame for her cutthroat style of play. Benny Watts (Thomas Brodie-Sangster) acts as a mentor until she soon surpasses his skill level. These two soon start to see the cracks in Beth's facade and warn her of becoming a washed-up pill addict by the age of 21, something that doesn't seem too far off when Beth starts to spiral.

Glen It's less about chess and more about the dark side of genius and addiction. It's also about a woman who doesn't know how to navigate human relationships. Mr. Shaibel, in addition to teaching her chess, tries to teach her how to seem more empathetic and human. We've seen stories like this before—A Beautiful Mind and Good Will Hunting tread similar themes—but The Queen's Gambit gets to take its time, and Taylor-Joy is certainly up to the task. She seems like a little girl when the film transitions from Isla Johnson as Beth to Taylor-Joy, but by the end, her Beth is a sophisticated, worldly, savvy young woman. I'm sure you can speak to this better than me, but I was also completely wowed by the costuming and sets. These hotels, rooms, and homes just scream out early 1960s, and Beth and her mother's dresses and styles are so spot on. Hats off to the costume designer, set decorator, and art directors. You deserve Emmys! Likewise to the music selector! So many great period songs! This is TV at its finest.

Anna The sets and costuming are amazing, as is the way they're shot. At one point, they're in a hotel in Mexico City and the camera sweeps along up stairways and open-plan lobbies through this retro hotel. It's really clever camera work and beautiful as well. Beth isn't the only one who can be her own worst enemy. Mrs. Wheatley is desperate for love and affection, and a boozehound to boot. She hitches her ride to Beth's career because, quite frankly, if she didn't, she probably would have drunk herself to death alone in the house. Instead, she becomes Beth's sounding board as she relives her triumphs and tears herself apart over losses. You're right, this isn't so much about chess as it is about the trappings of genius, but it's also about human connection and disconnection, and how relationships can be navigated even if you aren't inherently someone who naturally bonds. I'm definitely adding this book to my reading list; I can't wait to see how similar or different it is to the series. I plan on a re-watch too. It hit me just right emotionally and is an absolute visual feast. This is a winner! Δ