The Race of Gentlemen meets stormy conditions but garners enthusiastic crowds on Oct.15

It’s Saturday, Oct. 15, and I’m looking for parking near the West Grand Avenue beach access in Grover Beach. Despite scattered showers, the area is packed as thousands have streamed in for the first West Coast edition of The Race of Gentlemen (TROG), a pre-World War II vintage vehicle race that started five years ago in New Jersey as a way to celebrate America’s nostalgic hot-rodding past.

My wife, Anna, and I are forced to park nearly a mile away, so we follow the crowds and make our way over toward the event, where we encounter a field full of vintage cars and motorcycles, the air thick with the smell of oil and gasoline. There’s a long line for tickets, and though it’s nearly 11:30 a.m. and entry was supposed to commence at 11, the public’s not yet being allowed into the fenced-off event area thanks to a high tide and storm surge.

After a lot of tractor work and re-positioned barricades, the gates are finally opened and thousands come streaming in as the cars and motorcycles begin a few practice runs down the beach. There’s a near constant drizzle and my wife’s carefully coiffed hair is starting to get dewy, but that doesn’t stop people from asking her to pose for them in her fetching ’40s-style dress and her grandma’s vintage saddle shoes.

Racers have come from all over the U.S. and the world, some from as far away as Japan. The vehicles assembled represent some of the rarest working race cars and motorcycles anywhere. Many should be in a museum, but instead they’re sucking sand into their transmissions on the beach.

I manage to score a press photo pass, and dressed in coveralls as required—the idea being to blend in and not distract from the period feeling—I make my way to the starting line with the first pool of about 10 other photographers. Conditions are pretty terrible—it’s raining on my camera, the humidity fogging my lens, and the overcast sky muting everything into sepia tone—but it still feels like a glorious day, as if I’ve been transported back in time. 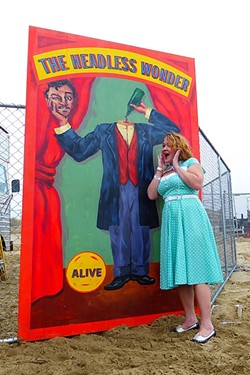 Soon the first races are set to begin, and the flag girls in their shorty-short coveralls take turns waving the racers off the starting line and down the beach, where the Doppler-effected roar of motors rises and falls like dragon’s breath.

The entire beach is thickly lined with race fans checking out the action, viewing the various displays, visiting the vendors, or grabbing a drink at the circus-tented beach bar, where Anna and I drink Pabst and Templeton rye whiskey. We’re wet but happy as Pismo clams. We’re also hoping that despite this inaugural year’s condition challenges, TROG West returns next year. What a day! 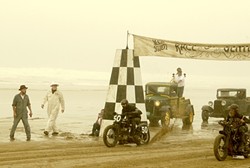