Craig Vetter is on the cutting edge

Thanks to the likes of Marlon Brando and Steve McQueen, motorcycles have earned a storied place in American culture. They’re what rebels ride. They’re cool. They buck the system. And obviously, the louder, the faster, the more complicated the bike, the more badass, right? 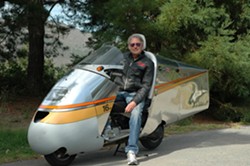 While that might be the conventional wisdom espoused by guys on $20K Harleys and ultra fast Ducatis, maybe, just maybe, the real rebel of the motorcycle world is Craig Vetter, who rides a Honda Helix scooter with a tiny 16 horsepower motor.

Vetter—who will be the grand marshal at the Annual SLO Classic Motorcycle Show on Saturday, Oct. 13, at Mountainbrook Community Church from 9 a.m. to 3 p.m.—has created the ultimate fairing for his scooter, and his ultimate goal is to get 100 mpg while going 70 mph, driving into a 30 mph headwind, and carrying four bags of groceries. Instead of faster, Vetter wants bikes to be more efficient. But it’s not just about good fuel mileage; it’s about getting incredible mileage while driving under normal conditions. How’s that for rebellious?

After marrying “the prettiest girl” at his famed Vetter fairing company, Vetter brought his fast-growing manufacturing plant from Illinois to the Central Coast in 1977. He bought what was then the largest commercial building in the county, on Laurel Lane, and watched his company double in size every year.

He decided to sell at the end of ’78 because of injuries he sustained at a racetrack in ’76—but more importantly because, with 500 employees, he no longer knew everyone and felt the operation was bigger than something he wanted to run. He’s first and foremost a designer, after all.

“The biggest reason I sold was because motorcycles were no longer about getting better gas mileage than cars,” he said during a recent phone interview. “When I started designing, motorcycles could get 40 mpg at a time when most cars were getting 12. I was trying to make motorcycles a more comfortable, fuel efficient, better form of transportation, but by the late ‘70s, people wanted faster bikes that got worse gas mileage, and that wasn’t where I wanted to go.”

For a while, Vetter also owned California Cooperage, the local hot tub manufacturer. Thanks to his industrial equipment used to form fairings, he saw the future of hot tub design as being vacuum-formed fiberglass shells rather than wood slats. He finally left SLO and the dream home he built here when Diablo Canyon was finally approved to go online.

“We were making babies, and I did my due diligence and discovered that no amount of radiation was safe,” he said. “We didn’t want to live around the thing.”

Today, Vetter is “doing exactly what I did 50 years ago—helping make motorcycles better transportation, learning to truly streamline a motorcycle. How much power does it take to go 70 mph into 30 mps headwinds? That’s why I host a series of fuel efficiency and mileage contests. It’s an arena for others to challenge me and try to do better. The goal is to discover how we can live better on less energy.”

He’ll be riding his design down from his home in Carmel on Thursday, Oct. 11, and be on hand when the Central Coast Motorcycle Club is host to Bike Night at Santa Barbara Bank and Trust on Higuera Street during Farmers Market. He hopes people will stop by then or at the Saturday bike show and see what he calls “The Last Vetter Fairing,” a design he claims can’t be improved.

“We may develop better materials, but there will never be a better shape,” he said. “Never.”

Does he think his innovative design ideas will ever enjoy the sort of commercial success his fairings had in the ’70s?

“Only if and when fuel becomes truly precious, and, no, I don’t know if it ever will,” he said. “What I do is what I think is the right thing to do. Fuel has only been truly precious twice in my life, once back when I was a baby during World War II, and in the 1970s, and that was due to government intervention.”

While our current soaring gas prices may certainly make fuel seem precious when we fill up at the pump, Vetter claims we’re not yet near the end of our supply: “They were saying in the ’70s that we only had 25 years left.”

Some may wonder why a cutting-edge designer has been tapped to judge a vintage motorcycle show, but Vetter is responsible for many innovative bikes of the past, including the 1972 Triumph Bonneville TT and the 1973 Triumph Hurricane. He also designed the 1975 Terraplane sidecar and many early streamliner designs.

“When you’re an inventor and you’re making things people have never seen before, like I was with the fairings in the ’70s, you’re not often embraced until much later,” he said. “Now I get the same reaction for my streamlining designs. Maybe in 40 years, they’ll be the norm.”

Come out and see some great old bikes and meet and talk to a rebel who’s always been ahead of his time.