The city of Pismo Beach opened its long-awaited pier plaza early this month, and along with new benches, bathrooms, a playground, and slides running from the plaza to the sand, the city installed three vintage Airstream trailers on the pier. One will soon be home to the Rib Line's newest location, Sunsets at the Pier, a food truck serving street food, beer, and wine, right on the Pismo pier. 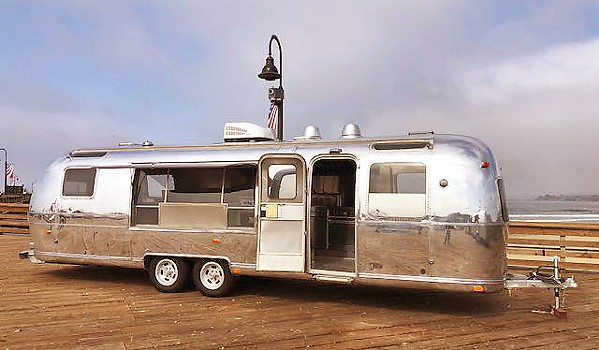 Rib Line already has two locations in San Luis Obispo and one in Grover Beach, and Appiano said he's hoping to bring something a little different to the Sunsets food truck.

"My whole menu is based on people being able to eat while they walk," he said.

Shrimp and filet mignon tacos, fried chicken sandwiches, pulled pork with tropical salsa—Appiano said he's aiming to offer a menu filled with gourmet street food flavors that satisfy the cravings we all have after a long day of playing in the sea. There will be tables and chairs for customers to sit, eat, and drink alcohol, and, since the truck is so close to the ocean, Appiano said Sunsets' packaging will be biodegradable and its production as low waste as possible.

"We're really trying to keep everything in mind," he said. "We want to be a showpiece for the city and the community."

It's not entirely clear when Sunsets at the Pier will open—the city still needs to install plumbing and electric wiring in the trailer—but Appiano said Rib Line is ready to get up and running.

The city of Pismo Beach purchased three Airstreams and had them retrofitted to meet health and safety standards for between $92,000 and $138,000 each, according to Jorge Garcia, management services director for Pismo Beach. One trailer will house a visitor information kiosk operated by the city's tourism and events staff and another will hold Sheldon's Bait Shack, where visitors can rent rods and buy snacks, bait, and tackle. The city requested proposals for concessionaires to operate in the third trailer, and Garcia said the Rib Line was selected through that process over a number of other applicants. Δ