It’s Saturday, March 26, and my wife and I are pulling into Blackhorse on Foothill Boulevard on our 1977 Vespa 150 Sprint to pick up our rally packs for this year’s Rides of March, the vintage scooter rally hosted annually by the local PushStart Motor Scooter Club. A few dozen Vespas and Lambrettas are already parked in rows in the parking lot, which continues to fill up. 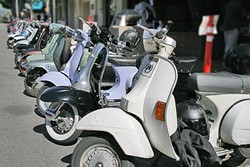 The wing-ding-ding of two-stroke motors and the smell of oil continue to fill the air as more and more scooters arrive. Event photographer Dez Cobb attempts to get her aerial drone aloft to take a group photo, but it crashes into the Scooter Speed van.

“Looks like it’s going to have to be from the roof,” Cobb says of the group shot. 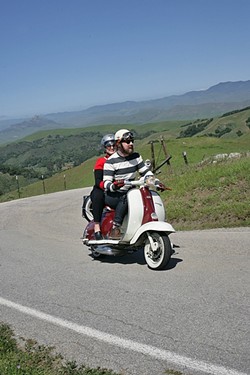 People have come from around the state. There’s a sizeable contingent from the Black Sheep Scooter Club of San Francisco with matching banners stretched across the fronts of their scooters. After the photo, the engines are revving and off the group goes to enjoy a long ride that heads west on Foothill, out to Los Osos Valley Road, then to Turri Road, right on South Bay Boulevard, through the state park in Morro Bay, out to Highway 41, then to Highway 229, then deep into the North County on Highway 58 before finally heading south down Highway 101. Yeah, we’re talking about nearly four hours of scootering with about 80 bikes, many carrying two passengers.

Back in SLO, the group convenes for a delicious all-you-can-eat feast at Palazzo Guiseppe on Court Street—a business with owners who have a fondness for Italian scooters and the people who love them. The patio is filled with riders, and Monterey Street is lined on both sides with their vintage rides.

After an afternoon hiatus, the scooter aficionados reconvene at 8 p.m. in Kreuzberg for Dance Craze, a DJ’ed dance party that runs until midnight. Those who are still standing filter out for a nightcap at McCarthy’s Irish Pub.

Back at Blackhorse on Sunday, March 27, there’s one final ride, this one over Prefumo Canyon Road and south to Steamers in Pismo Beach for lunch. Instead of riding, my wife and I drive to the top of Prefumo and set up to get some photos of the riders as they zoom past.

We hear them before we see them, the distinctive sound of two-stroke motors, and soon they’re zipping by us, one after another, leaning into the turns, the sun shining, the hills green, the sky blue. Everything seems right with the world … well, except for the two scooters we see broken down on the side of the road as we head back into town. Now what was the number of that follow truck?