Don’t be surprised if you hear the wing-ding-ding-ding of a few dozen two-stroke motors this weekend. Local “bike gang” the PushStart Motor Scooter Club will host its annual rally The Rides of March, which draws scooter enthusiasts from across the state and beyond.

For the uninitiated, the most common vintage scooter is the Italian Vespa, manufactured by Piaggio. At the end of World War II, Italy’s economy and infrastructure was ravaged, and Piaggio—a former aircraft manufacturer best known for its Pontedera fighter plane—had to find something else to build. Because of poor roads, cars seemed a stretch, so instead—inspired by American Cushman scooters—in 1946 Piaggio developed the Vespa (it means “wasp” in Italian), which had a pressed-steel uni-body frame with a front fairing, flat floorboard, and rear cowls to cover the engine. Unlike an open engine motorcycle, the enclosed engine and step-through design was supposed to be cleaner, as in less grease and oil flying around, and easier for men or women to ride in street clothes.

Vespa went on to make scooters for the U.S. market sold through Sears (as Allstate Cruiseaires) and Cushman. By 1981, Vespa’s American importer went into bankruptcy, and Vespas didn’t return to the U.S. until 2001 with modern four-stroke designs that captured a lot of the feel of the originals, though collectors still prize the pre-1981 imports.

Perhaps even more collectable than vintage Vespas are vintage Lambrettas, which began manufacture by Innocenti in 1947. The company produced its iconic scooters until the business was shuttered in 1972 and was eventually bought and moved to India.

You can expect to see everything from new and vintage Vespas to Lambrettas, and maybe even a few Cushmans, Allstates, and if we’re really lucky, one of the “American” Lambrettas imported and sold by Montgomery Ward. 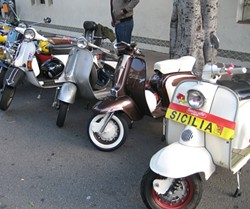 I’ve been to The Rides of March before, and it’s a hoot. In years past, the rally has been pulled over en masse by the Highway Patrol, which is always exciting. There’s usually at least one follow vehicle to pick up whomever breaks down, and hey, they’re old Italian scooters, so someone always breaks down.

Even if you don’t have a scooter, ride a scooter, or care about scooters, the event always has fun open-to-the-public stuff to do in the evenings, whether it’s cocktails at Madonna Inn followed by the Dance Craze on Friday, March 27, in the Venetian Room at 8 p.m. ($16 at the door or $12 presale at Boo Boo’s), or dancing to Santa Cruz’s 11-piece R&B band The Inciters at 7 p.m. in SLO Brew on Saturday, March 28 ($10 presale or at the door).

Aside from that, just listen for the magic sound of dozens of scooters riding roughshod across SLO County. Wing-ding-ding-ding!

You can learn all about The Rides of March at  theridesofmarch.com, but the basic schedule is as follows: Friday, March 27, meet at The Madonna in Silver Bar Cocktail Lounge for 6 p.m. cocktail hour. At 8 p.m. dance to DJ music in the Venetian Room during Dance Craze ($16 at the door; $12 presale at Boo Boo Records).

On Saturday, March 28, meet at 9 a.m. at Blackhorse Coffee on Foothill for coffee before leaving for a long ride through the county from 11 a.m. until about 3 p.m., when riders will arrive at SLO’s Palazzo Giuseppe’s for dinner; then head to SLO Brew around 7 p.m. for Santa Cruz’s 11-piece soul band The Inciters (doors at 7 p.m.; all-ages; $10). King Walrus & The Magicians, as well as various DJs, will open the show. Close out the evening at 11 p.m. at McCarthy’s.

On Sunday, March 29, meet at Giuseppe’s at 11 a.m. before heading off to a shorter ride at 1 p.m. that will travel to Giuseppe’s Express in Pismo Beach, arriving between 2 and 3 p.m.

Participating scooters must be manual transmission and metal-bodied.