The Rise of Skywalker feels forced

STAR WARS: THE RISE OF SKYWALKER

J.J. Abrams (Star Wars: The Force Awakens, Star Trek Into Darkness, Super 8) haphazardly directs the last chapter in the third and final trilogy in the Star Wars saga, in which Rey (Daisy Ridley) must channel her inner strength as a Jedi to lead the Resistance in the fight against the Sith. (142 min.)

Karen Without giving away (too many) spoilers, I think The Rise of Skywalker definitely feels like the end of an era for this saga (although give it a few years, and I'm sure we'll get spin-offs similar to Solo and Rogue One). It only makes sense, it being the finale and all, that director J.J. Abrams feels the need to throw every card he has into this film—a little too much nostalgia and new characters all at once for me. This isn't his first go at the franchise; he directed the first film of the trilogy Star Wars: The Force Awakens, in which he reintroduced old heroes like Han Solo (Harrison Ford), Princess Leia (Carrie Fisher), and Lando (Billy Dee Williams). This time around, at the start of the film, we find our young resistance leaders Rey, Finn (John Boyega), and Poe (Oscar Issac) on separate missions in the galaxy. Simultaneously, Kylo Ren (Adam Driver) continues on his war path to eliminate anyone who threatens his power, which ultimately leads him to an underground Sith leader.

Caleb Of course, we're not going to name this character—although he's been teased enough in the film's trailers, which I think was a big mistake. I wish I had gone in without knowing said Sith-sayer would probably appear, but I guess they gotta sell tickets somehow. Oh wait, it's Star Wars. The trailer literally could have been someone writing the title on a chalkboard, and boom, take my money! What I've unfortunately come to realize during these past few days after seeing the film is: The more I think about it, the less I like it. For me, the best entry in this "final" trilogy (yeahhhhh right) was Abrams' first outing, The Force Awakens. That film promised so much more in my opinion than what its predecessors were capable of living up to. I only recommend seeing Rise of Skywalker in theaters because it's a sin to watch a visual spectacle of its stature on your phone for the first time. Go for the action and humor, there's a lot to enjoy in the moment, not going to try to deny it. But the actual story is frankly forgettable (minus one pretty substantial twist). Everything feels so rushed, as if the writers only cared about wrapping the plot up as quickly as possible, even within a runtime of more than two hours. 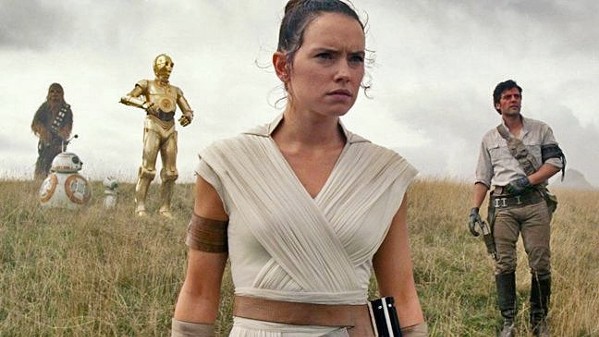 Karen I couldn't agree more. What bothered me the most were the strange seemingly deleted scenes of the late Carrie Fisher that were pieced together in the film to continue the story of her character. It just felt so weird to me—who gave someone permission to do that? My other issue with the film was the one-word dialogue that came from Kylo Ren throughout the entire movie. I felt that his character could have been much stronger—not saying he wasn't strong because he did use his powers to force choke one of his followers—if he had a better script to work with. Overall the film had the right fixings of a Star Wars movie: narrow escapes from the bad guys, lightsaber battles, and witty banter. But Abrams' delivery was just all wrong. I almost wish I could have jumped into the Millennium Falcon and traveled through hyperspace in certain parts of the film; it lacked the dialogue and storyline that makes this franchise stand out.

Caleb It's never not fun to revisit these characters, but this entry felt more like a roller coaster at times than a feature-length film (again weird, because it's more than two hours). Can you imagine if Star Tours at Disneyland was that long? It would be as if the lengths of the line and the actual ride traded places. But unlike said wait time, there most definitely won't be a moment when you're looking at your watch or phone (unless it's to look something up real quick after a mysterious cameo or big reveal) out of boredom. The Rise of Skywalker flies by, leaving barely any breathing room for its characters. But it's a thrilling, visceral experience nonetheless. I just wish I cared more about what actually happened. The most satisfying arc the film delivers a proper conclusion to is Rey and Kylo's struggle. They're basically the only two characters I was completely invested in. Everything else feels a bit shoehorned in (including a final say on who Rey's actual parents are). Finn and Poe each get their own small share of great character moments, but nothing worthy of a supposed "finale" to the Star Wars saga. But maybe that's the point, as they'll most likely get their own string of adventures down the line in future spin-offs. Δ