The curious case involving a pair of San Luis Obispo County men accused of filing false documents against a Santa Barbara County judge continues to drag on, trying the patience of prosecutors and judges. 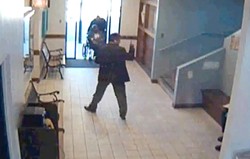 For more than six months, San Luis Obispo marketing executive Jeff Lind and co-defendant Tom Murphy of Los Osos have been battling a legal system they say is corrupt and in violation of their constitutional rights. The two men are facing multiple felony charges, and have yet to hire attorneys or represent themselves.

Fed up with what she saw as repeated attempts to delay the judicial process, Santa Barbara County Superior Court Judge Jean Dandona appointed public defenders for Lind and Murphy in November and scheduled an arraignment hearing for Jan. 19 in Santa Barbara.

After questions about whether the co-defendants would actually appear for the hearing after a death in Murphy’s family, the men did eventually show up, along with their court-appointed public defenders Jeff Chambliss and Robert Landheer.

Having no choice but to accept the attorneys, Lind claims he and Murphy are being denied due process and are being held hostage by a court system bent on prosecuting them for crimes they didn’t commit.

“Judge Dandona would not let us speak, [and] told the attorneys they did NOT have to sign a contract agreeing to our terms, thus depriving us of our right to contract,” Lind wrote in an email.

Citing case law, Lind continued, “The judge again refused to let us speak (another right stripped from us) and told us we have no choice but to accept the attorneys she appointed, violating our 6th amendment rights.”

Prosecutors filed felony complaints against Lind and Murphy on June 28, 2011, accusing the men of attempting to procure a false instrument of record, conspiracy to commit a crime, and attempting to file a false document. An arraignment was scheduled for last July; however, the hearing has been delayed numerous times because Lind and Murphy have refused to hire a lawyer without the attorney signing a document releasing him or her from the Bar Association. The Bar, they claim, is part of a judicial scheme to prosecute individuals for profit.

The lead prosecutor in the case, Senior Deputy District Attorney Brian Cota, said assigning a public defender over the objection of the defendants is uncommon, but in this case, the court found it necessary to move the process along. Cota said he’s never seen a situation where a defendant wasn’t able to find a lawyer after six months, and in requiring their own contract to be signed, Lind and Murphy are creating an untenable situation.

“They want to engage the court in all these philosophical arguments, but the bottom line is the people have the right to a speedy trial,” Cota said. “[Judge Dandona] is not limiting their ability to retain counsel, but at some point the process has to go forward.

“There needs to be an end to it,” he continued. “The case law I read … it all indicated that the judge has to be very patient and has to give them ample opportunity to find counsel, but that is not an unlimited opportunity. It can’t go on for months or years.”

Landheer, appointed to represent Murphy, said Murphy had presented him with a contract for services, but he had not signed the document.

Appearing with the defendants, the attorneys asked for, and were granted, a continuance for the arraignment to Feb. 16. Before leaving town, Lind and Murphy filed a final order to dismiss all charges against them on the basis of “wrong venue and want of jurisdiction” and “lack of cause,” claiming because there is no injured party, the county has no case against them.

In addition to accusing District Attorney Joyce Dudley and Superior Court Executive Officer Gary M. Blair of contempt of court and obstruction of justice, the document levels charges against Dandona of criminal coercion and kidnapping by fraud, among others. Both Lind and Murphy signed the document. The defendants have also filed and served a “Formal Notice of Criminal Investigation” against Dudley, Blair, and Dandona, which Lind says gives them 10 days to dispute with law.

“Their criminal actions are becoming more exposed with every unlawful move they make,” Lind wrote.

The whole circus surrounding Lind and Murphy began back in December 2010, when Lind was arrested on a misdemeanor charge of intimidating a witness, following a confrontation with a Guadalupe police officer at the county courthouse in Santa Maria. After protesting his innocence, supported by a video, the charge was eventually dropped. However, Lind and Murphy had already gone after Santa Barbara County Superior Court Judge Kay Kuns, the original presiding judge, filing a “National Standards Damage Claim Packet” alleging more than $77 million in damages. The filing led to more serious charges.

Lind continues to argue the lien he filed against Kuns wasn’t falsified, but a lawful “Notice of Intent to Preserve Interest” on the judge’s home, to bar her from transferring it into someone else’s name if he won a lawsuit against her. Lind says Kuns hasn’t responded to repeated notices, which the courts don’t see as valid.

The co-defendants continue to claim the county has yet to prove its jurisdiction, and as “each one of the people of California,” they’re not subject to the government’s laws and regulations. ∆

Jeremy Thomas is a staff writer at New Times’ sister paper, the Sun in Santa Maria. Send comments to jthomas@santamariasun.com.