The San Luis Obispo International Film Festival (SLOIFF) ends its second decade this year with a lineup designed to match the milestone. In addition to a full schedule of narrative features, documentaries, and shorts, the festival opened on March 5 with an appearance by Adam West and continues March 6 through 9 with a screening of Fritz Lang’s Metropolis, “Surf Night in SLO” with the band Honk in concert, a Les Mis sing-along, and quintessential “dude” Jeff Bridges receiving SLOIFF’s 2014 King Vidor Award. While the festival itself contains multitudes, New Times staffers have picked a few highlights in hopes of reeling you in. As journalists we were partial to the documentaries, but we ventured into the realm of fiction a few times when the landscape was too compelling to ignore. We giggled, we teared up, and we got really cold feet just looking at penguins. For your consideration, here are the New Times staff picks from the 2014 SLOIFF. 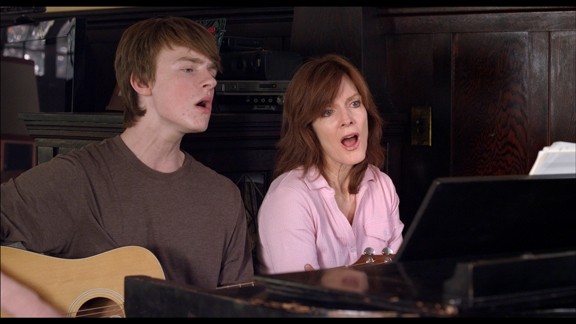 There’s a true art to coming up with a story that is sweet but not saccharine, sentimental but not cheesy. And Life Inside Out, director Jill D’Agnenica’s narrative film on new beginnings and second acts, treads that line beautifully. Life Inside Out is set in the suburbs outside L.A., and the vibrant music scene centered at L.A.’s Club Café Fais Do Do. The film lingers affectionately over scenes of songwriting and the brave souls who swallow back the butterflies to go onstage well before they feel they’re really ready. Other talented artists appearing are Xenia, Yogi Lonich, and Emma Bell.

The film tells the story of a woman who rediscovers her long-buried love for songwriting while finding a way to connect with her teenage son. Maggie Baird plays songwriter Laura, and Finneas O’Connell her troubled son Shane. Neither one of them quite fits into their testosterone-driven household, where Laura’s husband insists on discussing and doing manly things with her other two sons, while Shane broods and writes worrisome notes in his journal. When she drags him to an open mic night to hear her play, he is grateful just not to have to go camping with his brothers.

After rocky beginnings, Laura begins to get comfortable onstage, and it doesn’t take much clairvoyance to see where things are headed. Nevertheless, the film has a satisfyingly relaxed pace and characters that seem worth knowing. It would have been easy to assign Laura’s fears and troubles to a villain—say, the husband who is desperate for her to get back to work to help pay their mounting bills—but D’Agnenica and Baird, who also wrote the screenplay, never resort to pointing fingers. Also refreshingly, Life Inside Out refuses to follow the classic template for on-stage competitions and follows its own course to Laura’s ultimate win.

I Am Not a Rock Star, the fascinating documentary about piano prodigy Marika Bournaki, gives a rare long view of what it’s like to be supremely talented, restless, and going through puberty on stage and on camera. Directed by Bobbi Jo Hart, the film chronicles the young Montreal pianist’s life on the road and behind the scenes for eight years, from age 12 to 20. While it can be a bit wearying to listen to a teenager whine about her parents and staying in crappy hotel rooms, by the movie’s end it feels like a privilege to have watched her grow up into an artist of depth and maturity.

The film also asks, without ever directly saying: “What would you sacrifice to be absolutely brilliant at something you love?” and then illustrates the answer with Marika’s life and relationships. Her commitment to her craft and the lifestyle that it requires takes its toll not only on her but on the whole family, including her younger brother and sister. We see firsthand the pressure that Marika feels every day and the pain of never quite being satisfied, even as her room fills with trophies and critics stumble over themselves to praise her.

Her father, a failed musician himself, relentlessly micro-manages every decision she makes, from clothes to classes to musical selection, while continuously saying “it’s your choice.” We all know better.

Overall this film is worth seeing for Marika’s performances alone, as well as for a satisfying ending that Hart couldn’t have known would materialize but that gives the story, and the performer, the emotional center both have been searching for.

The behind-the-scenes documentary Hey Bartender, by director Douglas Tirola, takes Cocktail, the movie where Tom Cruise rattles a cocktail shaker and becomes a chick magnet, and turns it into a frivolous chapter in serious bartending history. Cocktail bars—not to be confused with regular bar-bars—have been experiencing a rebirth in larger cities for some years now. Their visionary owners and managers have eschewed syrupy, chemically mass-produced mixers that sit in non-descript white plastic carafes behind the bar for fresh and natural everything: real fruit and herbs, hand-squeezed juices, essence of this and that, ice shaved from a large block by hand. The bars that succeed are those that manage to walk the narrow line between being a haven for artisanal skill and the hot club of the moment for hipsters.

Take Employees Only, a popular speakeasy style nightclub in New York City, and one of several locations featured. The staff at EO is capital-S serious about their drinks, and this passion is exemplified by apprentice bartender Steve Schneider. Schneider, a former Marine seriously injured in a bar fight, now lives to impress his guru-like boss, entrepreneur, and craft bartending educator Dushan Zaric.

On the other end of the cool bartending kid spectrum, we have regular guy Steve “Carpi” Carpentieri of Dunville’s, a neighborhood bar in Westport, Conn. Dunville’s has always been a townie favorite and after some initial resistance to change, Carpi has decided that he’s willing to do whatever it takes to bring it back to its previous glory.

The film culminates in an international competition set in New Orleans called Tales of the Cocktail. You will leave this movie wanting a hand-shaken cocktail. Luckily we live in a town that loves to serve them. 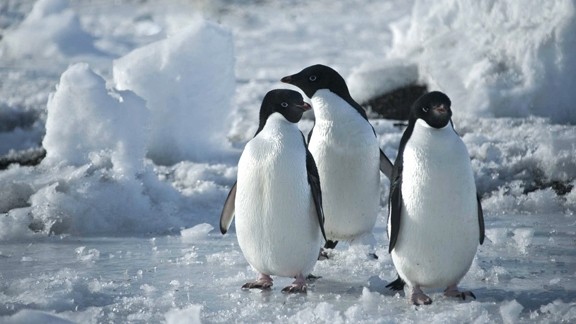 Antarctica: A Year on Ice is a rare dual-focus documentary: a film dedicated in equal parts to the austere Antarctic landscape and the people who live on the ice. Behind the camera is Anthony Powell, a Kiwi photographer and filmmaker who is finally shooting his own movie after years of work for National Geographic, the Discovery Chanel, and BBC’s Frozen Planet. Powell is an Antarctic veteran, and the film benefits from his expertise, broad access, and years of relationships.

The most striking part of Antarctica is the film’s aesthetic. Powell employs time-lapse photography—to great effect—in order to capture the dramatic nature and climate of the icy continent. In wide-angle, majestic shots, we see winds whipping, penguins waddling, ice and snow freezing and thawing, and the aurora australis crackling in the pitch-black sky.

In a wise move to differentiate his film from Werner Herzog’s 2007 Encounters at the End of the World, Powell interviews mostly everyday workers—a storekeeper, firefighters, dispatchers, cooks, and mechanics—eschewing the hotshot scientists who inhabit the continent during its more bearable summer season. Hearing these workers talk about the mental difficulties of enduring an Antarctic winter (four months of darkness!) is one thing, but Powell’s camera intimately shows us their struggles in close-up and boldly ventures outside into the frostbitten blackness.

Powell took more than a decade to shoot this film, and his patience and devotion in crafting a deeply authentic movie about the ups and downs of the Antarctic experience pay off handsomely. 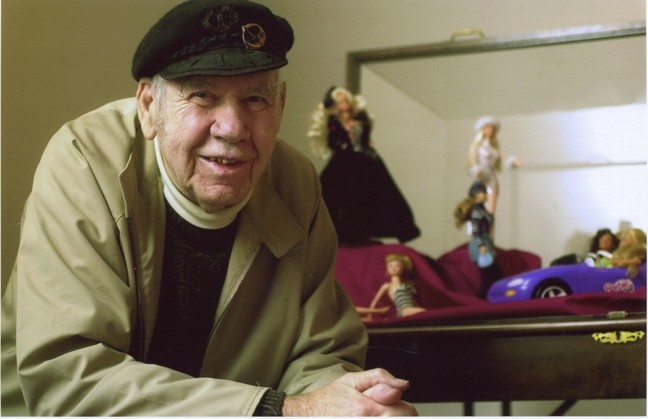 Jeremy Workman’s Magical Universe is a claustrophobic, intense, and emotional documentary about the outlandish and wonderful world of 88-year-old outsider artist Al Carbee. Through a chance encounter, Workman stumbles into Carbee’s home in small-town Maine, discovering that the entire residence is full of bizarre, intricate Barbie-centric mixed-media artworks that Carbee has obsessed over for decades.

The film could have easily strayed into “look at this wacky, deluded old guy who makes crazy art” territory, but Workman’s sincerity and directorial skill elevate the documentary to a superior level. It’s hard to describe the narrative thrust of the film without spoiling its many ornate wonders, but Workman’s deep friendship with Carbee, Carbee’s drive to have his art recognized, and Carbee’s own stab at documentary filmmaking are plot threads that combine to weave a compelling tapestry. Workman’s honesty and transparency are his greatest assets as a director: He narrates the film and deliberately includes outtakes in addition to conversations and monologues where he openly discusses his difficulties pulling the film together.

Magical Universe is not polished, nor should it be. It’s a powerful and convoluted exploration of artistic creation—completely unlike any other documentary, and better for it.

A dark woodland fairytale of a short film, Moritz und der Waldschrat (Moritz and the Woodwose) sets up a poignant, if expected, story—then turns it into something far more psychological. Writer-director Bryn Chainey weaves the story of Moritz (Kai Oliver Böhne), a young boy who makes a macabre deal with a woodland creature, into a meditation on mortality, innocence, make-believe, and the unknown.

Böhne is excellent in the lead role—innocent yet cruel in the way only children can be. He wears Moritz’s boyish anger like a cloak over sadness and fear. The film’s structure and spare yet poetic dialogue infuse it with a literary quality, but Moritz also exploits the visual splendor of the German forest where it takes place, taking time to establish its environment. Chainey even turns limited resources into a chance for greater mystery: We barely see the monster, but its plea haunts us long after the credits roll.

Want to know more? The full lineup of the SLOIFF’s 20th anniversary extravaganza is available on its website, slofilmfest.org. Grab a bag of popcorn, stab a straw into the lid of that soda, and look confusedly at the chocolate covered raisins for a moment before picking up a candy bar. It’s time for the show.

Arts Editor Erin C. Messer IS big; it’s the section that got small. She can be reached for her close-up at emesser@newtimesslo.com.