The secret life of water

Behind your faucet, go with the flow

From the pitter-patter of rain on the roof to the fresh flow from the faucet, our local water takes a long, little-known journey. It's poked and prodded by a hidden array of people and processes before it splashes into your shower or soup-pot. 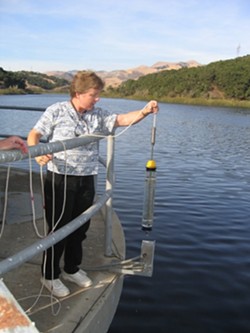 # Healthy, wholesome water in our homes is something most Central Coast residents take for granted unlike many of Earth's human inhabitants who still have to walk to a river or spring, collect the essential element in a clay or metal vessel, and carry it by hand or head back to their dwelling-place.

But as drinking water regulations in the United States become more and more stringent to protect the public's health, local water treatment facilities are seeing expensive upgrades reflected in our water bills to incorporate the latest technology.

Ironically, the main focus locally is chlorine, used for more than a century to kill microbes and eliminate water-borne diseases such as typhoid fever, cholera, and dysentery. Chlorine, we now know, reacts with humic acids found in the decaying vegetation in our reservoir water to form dangerous new compounds such as chloroform and bromoform known as trihalomethanes, or THMs, which are linked to increased rates of cancer and other possible health risks.

"We're literally saving millions of lives with chlorine, but it's a balancing act on THMs," explained John Beaton, water quality manager for the county of San Luis Obispo.

An activated carbon filter has recently come on line at the Cayucos treatment facility, designed to strain out organic material and therefore reduce those hazardous THMs.

# And at Lopez Lake, a multi-million-dollar construction project is underway to replace a plant first installed when the reservoir filled up during 1969's record rainstorms. Using state-of-the-art water treatment techniques that can meet strict THM standards, it's the first in California to win permission to use chlorine dioxide instead of chlorine for disinfection.

"It's a big challenge," Beaton said. "The operators have to continue to produce water while they're tearing up the old part of the plant and installing the new plant. It's like changing a tire on a car while driving down the highway."

These facilities, of course, just treat water they don't make it. The Earth's water cycle is a closed system, which means the water in our bodies and in our reservoirs is the same water that was used by the dinosaurs.

The water in our faucets may begin its local journey as vapor in the rainclouds, falling to the ground on the hills around Lopez Lake in the first storm of the season. A team of water specialists is ready, collecting samples of the flow from nearby creeks, the water faucets at Lopez campground, and different depths of the 105-foot-deep lake.

Taking care of the watershed is an important way to take care of the water, Beaton explained. Contamination sources can include fertilizers from agricultural runoff, bacteria from grazing cattle, or sewage from pit toilets, which can all create extra algae and its accompanying bad taste and odor, he said.

"It's easier to keep it out rather than paying later to get it out," Beaton noted as he pointed out the public restrooms and the sewage treatment plant for Lopez campground on the shores of the lake.

"We eliminated grazing permits years ago, and the sewage

# treatment plant uses land disposal far from the lake. It's nice that so much of this watershed is wilderness," he added.

Like dozens of others from all over SLO County from Nacimiento to Nipomo, Cayucos to Shandon the little bottles of water samples are delivered to the county's water quality lab on Kansas Avenue near San Luis Obispo for analysis by sophisticated equipment. Next to the glass pipettes and petri dishes are atomic absorption spectrometers, ion chromatographs, turbidi-meters, pH meters, autoclaves and staff noses.

"Our nose is like a multimillion-dollar chemical analyzer," said water systems chemist Carlo Christian as he indicated a chart of water odors detectable at very low levels by the human nose, with descriptions such as chlorinous, earthy, fishy, grassy, musty, and hydrogen sulfide.

Lab chemists also check the water samples for algae, carrying out a complex identification of species.

"Now that I know exactly what's in our streams, I would never drink water directly from a stream without filtering it. No way. It's disgusting. I would even make my dog his own Sierra cup of filtered water," Christian said.

The analysis of water samples taken from different depths of Lopez Lake is used to determine the best location for intake to the water treatment plant. For example, if there's too much algae near the surface, a deeper intake can be used.

Lopez Lake is one of the few drinking water reservoirs in California where swimming is permitted, which presents its own challenges for disinfection, according to Beaton.

# The trick is piping the lake water downstream, where it spends a month in a smaller reservoir off Orcutt Road. Known as a terminal reservoir, the fenced, 30-foot-deep pond provides the beginnings of ultraviolet disinfection of viruses with sunlight, plus settling out of tiny but potentially dangerous particles.

Another set of samples from this terminal reservoir shows the best depth for the intake, which carries the water to the treatment plant next door.

The plant was originally designed to use conventional water treatment, and has been "a real workhorse for more than 30 years," Beaton said.

"It's kind of sad: The things we've worked with for 30 years will be abandoned," said Beaton, fondly patting a massive blue pipe.

Chemical coagulants are mixed in so that particles will clump together and settle, as flocculators stir gently. These particles of algae and other organic matter, called floc, are removed after sinking to the bottom, and the water is then sent through thick layers of sand and gravel for filtration.

In the past, chlorine was added at this stage for final disinfection. Now, however, the Lopez plant uses chlorine dioxide, which doesn't form THMs. Widely used in Europe, chlorine dioxide is too explosive to safely transport, so it's made directly on the site.

# The Lopez plant, while described as "old and tired" by Beaton, has one excellent feature that won't be continued once the new plant is completed next June: energy savings.

"It's been all gravity-fed, from Lopez Lake to Port San Luis, with no pumping. Just gravity. Think of the energy cost savings over 30 years," he said.

The upgraded plant, however, will use pumps to run the new dissolved air flotation system, an innovation that uses tiny air bubbles and the natural tendency of algae to float to the surface, where it can be scooped off. Pumps are also needed for the new above-ground membrane filters, which are something like giant spaghetti strands that remove particles.

A shiny new aluminum dome covers a huge underground hydraulic reservoir, where two million gallons of treated water are stored before daily distribution to 50,000 people in the South County. The water level drops in the mornings and evenings when household water use is at its peak, and fills up at other times.

The control room at the plant looks its age, with its continuous chart recorders etching black lines across lined pages, and red and green domed lights and alarm panels connected to various pumps. These Homer Simpsonesque controls will be replaced with banks of computers when the new plant comes on tap.

If alarms go off, or if water samples show something of concern, the water chemists and plant operators spring into action to resolve problems quickly, whether it's day or night, a weekend, or a holiday.

# "A lot of us have worked through the night more than once," said Lisa Wallender, a water systems chemist in the county's lab.

Inside a smaller laboratory at the Lopez plant, one sink sports seven different faucets for sampling, each one labeled with its water source. Individual samples may be taken of water at various stages in the treatment process, as well as the state water that's blended with Lopez water. Although only Oceano, Pismo Beach, and Avila have signed up for state water, each of the Five Cities receives a blend of Lopez and state water, according to Beaton.

"It's fascinating to help produce the water I drink at home, and see how it changes day to day," said Faith Zenker, a water systems chemist at the Lopez lab. "When I see the water coming out of my faucet, I think of what chemicals are in it, how much nitrate and chlorine. I feel good about the water we produce. It's a constant work in progress we're always trying to improve it."

Water Systems Chemist Wallender piped in: "It's amazing how few people know where their water comes from. When we're doing our job right, nobody thinks about us."