'The Seeds: Pushin' Too Hard,' a documentary about a forgotten mid-'60s rock act, screens May 9 at the Fremont Theater

Oh, rock ’n’ roll, you never cease to amaze me! From all your pretty 27-year-old corpses to your excesses to your plane crashes to your classic rise and fall stories of ambition, fame, hubris, and the slow spiral into irrelevance, you seem to have an endless supply of cautionary tales. 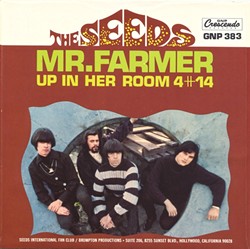 A new film by musician, composer, actor, and director Neil Norman tells the fantastic, gleeful, tragic tale of 1960s garage rock wunderkinds The Seeds, a band credited with creating the idea of flower power, whose frontman Sky Saxon is the prototypical rock god, who like Icarus, flew too close to the sun and plummeted back to earth in an inglorious heap.

This Saturday, May 9, at 9 p.m., the historic Fremont Theater will screen The Seeds: Pushin’ Too Hard, a full-length rock ’n’ roll documentary that through archival footage, photos, and recordings—along with contemporary interviews with music biz notables—tells the story of a quartet of young men who spent about 18 glorious months in the spotlight. It’s mostly the story of Sky, née Richard “Richie” Marsh, a sweet Utah-born Mormon kid who went to Hollywood and became bigger than life. It’s also the story about how sometimes personality is enough to transcend marginal talent and launch someone into fame. As Iggy Pop (one of those interviewed) said, like a lot of the best rock performers, Sky couldn’t really sing. He was bigger than mere vocal talent.

Director Neil Norman had a front-row seat to the rise and fall of The Seeds.

“My dad is Gene Norman, who mentored me throughout my life,” said Neil in an email interview. “He signed The Seeds to GNP Crescendo in 1965, and I gave my heartfelt approval. Capitol, Electra, and Columbia turned them down. Luckily, I was around and usually in the studio when their classic sides were recorded. Sky Saxon [vocals], Jan Savage [guitar], Daryl Hooper [keys], and Rick Andridge [drums] really influenced me, and inspired me to choose a career in music and recording.” 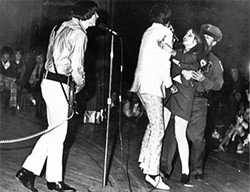 Neil and his producer Alec Palao “left no stone unturned” in digging up archival materials about The Seeds and found “many previously unseen sources,” even hiring “a private investigator to find some people who had disappeared.”

“We also had a wealth of treasures from our own archives, and it entailed crawling around a lot of dusty attics! Everything from 8mm film, stills, audio in every format since 1965—we should open a museum,” he said.

Aside from the fascinating story itself, Neil managed to gather a real rogues’ gallery of rock luminaries willing to discuss The Seeds: people like Kim Fowley who “discovered” The Runaways (What a character he is!), Iggy Pop, Bruce Johnson of the Beach Boys, Arthur Lee of Love, The Bangles, and many more.

“They were all excited to participate,” Neil said. “These guys are featured so prominently precisely because they were influenced by The Seeds in their own ways, whether as contemporaries like Kim or because of their influence on garage punk that came down through the years to a band like The Bangles. Kim had a 50-year history with GNP Crescendo, and I wrote songs and produced projects with him. In the late ’50s, my dad paid him $50 a week to look for rock bands for us! They were all incredibly articulate and charismatic.”

Whether you’re a musician, a lover of rock history, or someone who appreciates the art of documentary filmmaking, this is a must-see film. It’s truly a quintessential rock tale about a band that’s largely forgotten today, although if this film gets its way, The Seeds will live on in rock history.

“Everyone has been very enthusiastic and pleased that the story got such first-class treatment,” Neil said. “I experienced many historical moments in music firsthand—the Sunset Strip, The Seeds with Buffalo Springfield and The Supremes at the Hollywood bowl, ‘hangin’ out’ with incredible performers like Lenny Bruce, Jonathan Winters, Orson Welles, Ella Fitzgerald, John Mayall, and Jerry Goldsmith. My access has been unusual, and audiences are responding to that.”

And for those who’ve been around for a while, you might remember this little nugget of local history regarding Neil: “I made radio history at K-OTTER when, during a live interview, I announced that everyone who called would receive a copy of my new Robin Trower album that I produced, which was climbing the charts in 1986! The phones were jammed for three hours!”