This limited eight-part series is a co-production between BBC One and Netflix chronicling the crimes of real-life French serial killer Charles Sobhraj (Tahar Rahim), who murdered young tourists between 1975 and 2000. Sobhraj, a man of Vietnamese and Indian descent, drugged and robbed young travelers in Thailand and elsewhere, stealing victims' identities, passports, and traveler's checks, and used the money to buy stolen gems at a discount to sell at a profit in Europe. With the help of his Québécois girlfriend, Marie-Andrée Leclerc (Jenna Coleman), and Indian henchman Ajay Chowdhury (Amesh Edireweera), they seemed untouchable ... until a relentless Dutch junior diplomat, Herman Knippenberg (Billy Howle), began investigating the disappearance of two Dutch tourists. (eight 58-min. episodes) 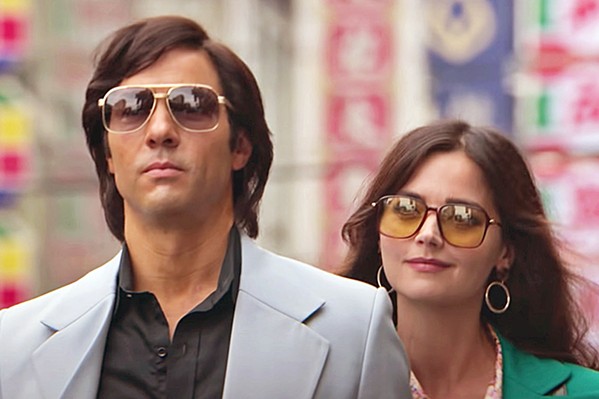 Glen As a story, the life and crimes of Charles Sobhraj are pretty repetitive. He finds susceptible tourists, drugs them, takes them home under the guise of healing them, and keeps feeding them poison as he extracts whatever money he can from them. Then he disposes of them. Rinse and repeat. I have a feeling if this series was simply in chronological order, it would get a bit boring, but instead, this time-hopper moves back and forth, coming at his crimes from multiple points on the timeline. Along the way, in what the series admits is wholly manufactured dialogue, we learn about Sobhraj's upbringing, his feelings as an outsider growing up in France, and his developing hatred of the well-to-dos—hippy kids who can take a year or two off of life with a pocket full of parent-funded traveler's checks to travel to exotic locales. The fractured chronology feels needlessly complicated at times, but that's probably better than feeling repetitive. I have to say, Rahim is terrific in the starring role. He's charismatic, dangerous, and appropriately reptilian. I wanted to strangle him the whole time. What kind of monster can poison someone, watch them suffer, and feel nothing? He was a real fiend.

Anna How Sobhraj's murderous story has been unknown to my true-crime-obsessed self, I'm not sure, but boy oh boy, this guy is an absolute nightmare. He's got the ability to charm and the means to offer his victims an easy place to stay that seems on the surface like a hippie Shangri-La. He managed to keep one step ahead of authorities for a really long time—his crime spree lasted 13 years, and he took the lives of a dozen people, at minimum, in at least nine different countries. He holds a spell over those closest to him—both Leclerc and Chowdhury are evil in their own right, but would they have turned that dark without Sobhraj? We'll never know, but it's certainly clear who the puppet master is here. I agree this really couldn't have been done chronologically—sometimes the time hops get needlessly complicated, but overall it keeps the pace of the miniseries rolling, especially in the last few episodes when the heat is on and the clock really starts ticking for Sobhraj and his cohorts. Once I settled into this series somewhere in the middle of the second episode, I was hooked.

Glen This is also Knippenberg's story, and Howle plays him like a man obsessed. His boss, Ambassador van Dongen (William Brand) orders Knippenberg to leave the case of the missing Dutch tourists to the local Thai authorities, but the case is clearly not a priority for the overworked and corrupt Thai police. Unable to let it go, Knippenberg soldiers on, slowly digging up clues and becoming increasingly distraught that no one is doing anything to stop the killings and disappearances he's now linking together. All of this strains his relationship with his otherwise supportive wife, Angela (Ellie Bamber), who sees her husband imperiling his diplomatic career with something that's really not his responsibility. In fact, he's been told to drop it by the ambassador multiple times. Without Knippenberg's relentlessness, Sobhraj might still be out there. The series becomes taut when it's clear Knippenberg has zeroed in on the right culprit, and with the help of Sobhraj's once unsuspecting neighbors, Nadine (Mathilde Warnier) and Remi Gires (Grégoire Isvarine), a game of cat-and-mouse ensues. I'll hand it to Sobhraj—he's slippery and clever and always finds a way to escape. As a limited series, it's pretty engrossing, despite its flaws.

Anna Knippenberg can't let this go—and thank goodness he didn't—but it definitely took him to a breaking point. Howle does a great job in the role. The last couple of episodes are especially tense as Sobhraj suspects that Nadine and Remi helped a friend named Dominique (Fabien Frankel) escape Thailand while Sobhraj, Leclerc, and Chowdhury were out of the country. He's a frightening guy. Rahim does an amazing job at capturing a seething, serpent-like quality. The plan to raid their compound becomes complicated and on the razor's edge of failure with Nadine held captive by Sobhraj. It's tense, and I was definitely yelling at the TV screen during a lot of that last episode. What ends up happening to Sobhraj further proves that his calculated and horrible moves have nothing to do with helping those he claims to care for—instead he's just a monster out to save his own skin. I'm definitely looking more into this story after watching The Serpent, and I'm so glad this killer is still sitting in prison at the age of 77. Δ