The shape of surf

In an era of mass-produced, cookie-cutter, machine-made surfboards, purists can heave a sigh of relief to see Leon Burrows take surfboard shaping back to its roots. 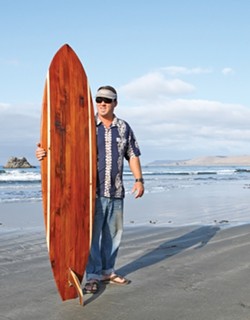 # Burrows, a carpenter by trade and a surfer by choice, has recently combined the skills of his profession and the knowledge of his hobby to create high-quality redwood surfboards and surf-inspired furniture.

Burrows, 31, began shaping surfboards and doing carpentry work when he was 20. Now, more than a decade later, the SLO County native has shaped more than 100 foam surfboards and has done countless woodwork. It seemed only natural that the Cayucos local would combine the two art forms.

"Putting nails in a board was getting kind of old," Burrows said. "And this was something I always wanted to do."

A couple of months ago, Burrows decided that it was finally time to turn his dreams into reality. More than 40 hours of planning, shaving, shaping, and varnishing later, he turned a 2-by-12 slab of fallen California old-growth redwood into a 7-foot, 30-pound gun.

"The thing just turned out insane," he said. "It's a cross between a work of art and a weapon. Its like a sexy missile that will cut through the water with no resistance."

A couple of days after its completion, Burrows took the board to a nearby surf contest. People's reaction to the old-school-inspired surfboard made him realize the potential of demand for similar products.

"Everyone was just blown away," he said. "People just wanted to touch and feel it. One guy said he could get me $1,000 for it."

After receiving that kind of response, Burrows went right back into his garage and started shaping similar surfboards--only this time he decided to make them into benches, chairs, and tables.

Though Burrows enjoys the idea of padding his pockets while doing something he enjoys, he says it's just as rewarding completing the surfboards.

"It's really nice--after all the work, with sawdust in your eyes and varnish on your hands--to sit back and admire what you've made," he said.

Burrows plans on expanding his selection to include African mahogany,

Brazilian hardwoods, and other high-quality lumber.

Staff Writer Kai Beech compiled this week's Strokes and Plugs. Items for consideration should be e-mailed to rmiller@newtimesslo.com.