The Siren takes over food, drink, and fun at Dairy Creek Golf Course

Photos Courtesy Of Stephanie Stiles PATIO VIEWS The Siren El Chorro opened at the end of January, serving food and drinks on the patio at Dairy Creek Golf Course and in the new Toptracer® bays.

Find your way to Dairy Creek Golf Course, located at 2990 Dairy Creek Road in San Luis Obispo. The Siren El Chorro is currently open Monday through Thursday from 10 a.m. to 10 p.m. and Friday through Sunday from 8 a.m. to 10 p.m. Visit thesirenelchorro.com for more info, to check out a menu, or sign up for a round at Toptracer®.

Fog grabs at the tops of the morros extending between Morro Bay and San Luis Obispo as a heat lamp gently purrs on The Siren's patio overlooking part of the Dairy Creek Golf Course.

Hues of purple and hints of rosemary encircle a Gin Gimme cocktail—Empress Purple gin, a rosemary sprig, squeeze of lemon, and grapefruit juice and bitters—as it sweats on a napkin. Crisp fried wonton jalepeño poppers stuffed with the diced pepper and cream cheese wait for a dip in sweet chili sauce.

Stephanie Stiles and Monte Schaller riff on their plans, talking over one another in their excitement about what The Siren's been up to at the SLO County-owned golf course and what the future could look like. Stiles, the general manager at The Siren El Chorro, and Schaller, the general manager of The Siren in Morro Bay, have known each other for years, since they first worked together at the old SLO Brew on Garden Street. And they're excited for this opportunity to work together again on a project they both believe in.

Stiles describes that potential as a low-key version of Disneyland for adults. Schaller explains it as a grown-up Boomers. Both say it's family-friendly and adult-oriented: "If we can dream it, we could potentially do it," Schaller says.

The county approached The Siren in August about taking over as the golf course vendor serving food and drinks to restaurant and Toptracer® patrons for starters, with more on the post-COVID-19 horizon—concerts, other events, and a liquor license that expands across Dairy Creek's 700 acres.

"We kind of hemmed and hawed. We thought it was a great opportunity, but weren't sure we had enough staff," Schaller explains, adding that The Siren in Morro Bay closed three separate times in 2020 due to COVID-19 pandemic regulations. As a result, they reduced staffing and turned from a music-centric establishment to one focused on food and drinks.

"And we were slammed," he says. "We took a lot of that energy and staff and brought it over here."

Ultimately, the two managers want to create a space that they would want to go to. A laid-back spot with that Siren in Morro Bay vibe, good food, good cocktails, good fun, and eventually great music.

The Siren El Chorro opened at the end of January, serving spirit-forward cocktails and scratch-made California-style pub fare on the outdoor patio that stares across the golf course and beyond to the coastal range. Toptracer®, which they explain as a similar experience to bowling, has a series of bays where four at a time can compete against one another at the driving range, hitting golf balls at targets that light up at night while a computer tracks launch, speed, curve, and more. This is a big reason The Siren decided to move forward at Dairy Creek, Schaller says.

Open until 10 p.m., Stiles says the bays are fully reserved most evenings, with groups of people and families who come in for a COVID-19 friendly outing. They can order food and drinks from The Siren and play.

"This place is for any age, any fun. And you just add alcohol," Stiles says.

El Chorro's adult beverages are as local as they can get with wine and alcohol from the Central Coast and Tin City vodka and gin (made by WineShine in Paso Robles) as well liquors. Stiles says the cocktails are designed to showcase the spirits, not overwhelm them, and they're created by the bartenders themselves, so they're unique. Take the A Milli: a Bumboo rum cocktail with pineapple juice, honey, agave, and iced tea. 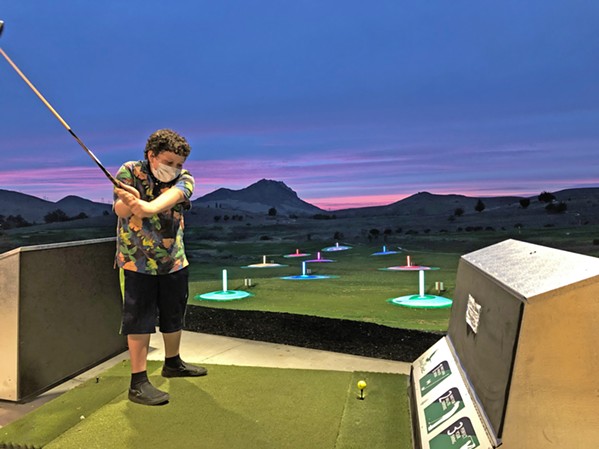 Things can get a little brisk out at the course, so Stiles brought her knowledge of hot cocktails back from Tahoe with her to put a little warmth on The Siren's drinks menu. She worked at and managed bars and restaurants in Tahoe Village, including Ten Crows BBQ, Beach House, and California Burger Company, before recently moving back to the Central Coast.

Schaller and Tulio Aviles took over the kitchen at The Siren in Morro Bay about three years ago, refining the menu into something less frozen with an eye for how to make classic items such as jalepeño poppers better. Wrap the classic ingredients in a wonton wrapper, drop it in the frier, and you've got something tastier and a little more elevated than poppers out of the bag.

"It's so gratifying to not buy something in a box from a vendor," Schaller says.

Aviles, who used to run the kitchen at Enzos in San Luis Obispo and whose family runs La Palapa in Los Osos, initially worked security for The Siren, Schaller says, before becoming the head chef. 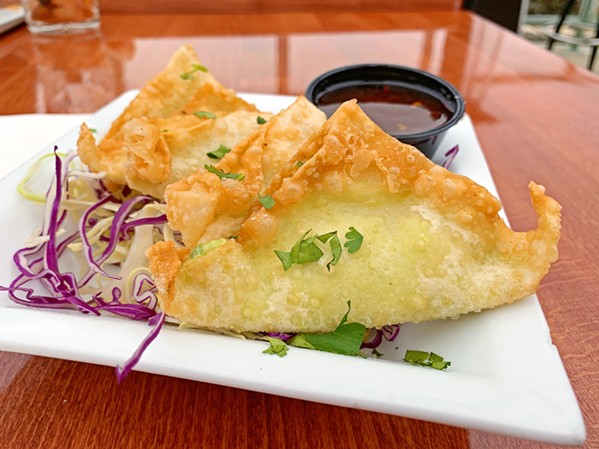 Stiles touts him as the best kitchen manager she's ever worked with. Schaller says Aviles is good at making sure the details are covered, such as ensuring that the oil used for fish and chips is separate from the oil used for things like the fried pickle spears and corn dog bites.

Editor Camillia Lanham is ready for Cajun steak bites and a round at Toptracer®. Send food and drink news to clanham@newtimesslo.com.