'The Sisters Brothers' offers a darker take on the Wild West

Co-writer/director Jacques Audiard (Dheepan, Rust and Bone, A Prophet) helms this adventure-comedy-crime story set in 1851 Oregon, and based on Patrick DeWitt's novel. John C. Reilly and Joaquin Phoenix star as Eli and Charlie Sisters, two notorious assassins in pursuit of gold prospector Hermann Kermit Warn (Riz Ahmed), who's been taken under the wing of scout John Morris (Jake Gyllenhaal). Unfortunately, Eli begins to question his "profession," while Warn hopes to offer an alternative to his death. (121 min.) 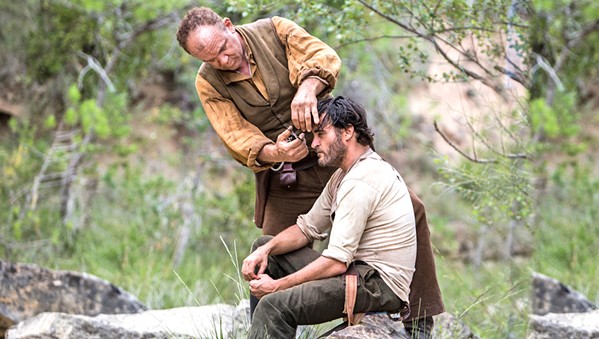 Glen What a brutal, unforgiving world Eli and Charlie Sisters find themselves in. The Old West that Audiard conjures up reminds me of the work of Sam Peckinpah (The Wild Bunch, Straw Dogs, Bring Me the Head of Alfredo Garcia)—dark, violent, and absurd. The film opens with a nighttime gunfight, fiery discharges lighting up the blackness. The Sisters are remorseless, and they're under the command of The Commodore (Rutger Hauer), a classic Old West villain who takes what he wants. The Sisters' next mission is to find Warn and kill him, but not until they've extracted a formula he's developed to find river gold. They head south out of Oregon, discovering that The Commodore's scout John Morris has taken up with Warn instead of holding him for their arrival. Next they come upon the dangerous town of Mayfield, where they meet the town's namesake (Rebecca Root), every bit as vicious as The Commodore. Eventually they catch up with Warn and Morris near San Francisco. Along the way, we get to know introspective Eli and reckless, hard-drinking Charlie, who squabble along the way. They've had an impossibly hard life and know of no other way to get by than with gun in hand. Even though they're murderers, Charlie being especially awful, I couldn't help but sympathize with them. This is a cutthroat world, and those they dispatch are just as unsavory. In stark contrast to the Sisters is the educated and philosophical Morris, and the idealist Warn, who dreams of creating a utopian world of true egalitarian democracy. It's a story about the horrors of the real world and the dream of a perfect world—one too terrible to survive, the other too good to be true.

Anna It certainly is a harsh world in the Old West, and Charlie and Eli have chosen a particularly nasty line of work that affords them little time for rest and an inherent distrust of the world around them. I was surprised that I hadn't heard more about this film when it came to SLO. It has four very billable actors as leads and a shoot-'em-up storyline to keep the action rolling. Reilly and Phoenix are a good match as the outlaw brothers—while they work together seamlessly in the midst of a gunfight, their personal relationship is a lot messier. Charlie is a drunk just like their pa; Eli is the put-upon older brother who yearns for a simpler life sans a murderous career. When the brothers finally track down Warn and Morris, the idea of a different life starts to settle in, but nothing goes quite right for these two outlaws, and Charlie's erratic ways soon lead to more trouble. This is the kind of Western I like—there're plenty of gunfights and squinty-eyed cowboys staring each other down, but there's a story here and not an oversimplified one. It may have quiet moments but it doesn't get boring. A nice balance is struck between bloody battles and crisp, beautiful, quiet moments out on the plains.

Glen Since I'm unfamiliar with the book upon which it's based, I had no idea where the story was going, and it certainly went to a lot of unexpected places. Both brothers endure some truly horrible ordeals, in Eli's case through bad luck, and in Charlie's case through reckless stupidity. Some of it plays out like a horror film. At heart, however, it's the story of family. Charlie's a terrible person and Eli has been taking care of him his whole life, sticking by him regardless of what stupid mistakes he makes. To an outsider, Charlie's irredeemable, but Eli knows how and why Charlie is who he is. Eli doesn't blame Charlie even though he's clearly exasperated by the drinking and aggression. It's a very unusual Western, sort of in the vein of The Missouri Breaks (1976), and director Audiard mixes classic Western vistas with the sort of dark, dirty horrors of A Man Called Horse (1970). There have been a few good Westerns lately: Hostiles (2017), The Ballad of Lefty Brown (2017), contemporary Westerns Wind River (2017) and Hell or High Water (2016), In a Valley of Violence (2016), The Revenant (2015), and Django Unchained (2012) spring to mind. It's hard to know which films will stand the test of time and become iconic like The Ox-Bow Incident (1943), High Noon (1952), or Shane (1953), but if you love Westerns as much as I do, The Sisters Brothers is absolutely worth the price of admission. As a bonus, you get an amazing Carol Kane as the brothers' mother Mrs. Sisters. It's a small but essential role, and it perfectly caps this surprising and affecting story.

Anna The short time that we get to spend with Mrs. Sisters and her two boys is precious, and Kane plays the tough but motherly woman with tenderness. I loved the ending of this film. As someone who is personally pretty tight with siblings, I can tell you that the loving but exasperated relationship between Charlie and Eli is very much relatable, just brought to an extreme. That whole concept of "you can't choose your family" plays across Eli's face every time he's forced to deal with Charlie's terrible decisions. As you said, he knows the reasons behind Charlie's faults and most certainly feels guilt for not being able to protect his little brother from the world's evils. Reilly and Phoenix seemed a bit of an odd pairing to me at first, mostly because I think of Reilly as a comedy guy through and through. This is a great reminder that he holds more cards than that. If this were playing at a Downtown Centre or Galaxy type theater, I may say hit a matinee, but the Palm's pricing is so good that there's no reason not to hit this one up day or night. It's an entertaining and style-savvy ride through the Old West, and a sad yet sweet family story at heart. Δ