It's Friday, Dec. 1, and it's beginning to look a lot like Christmas—probably because a bunch of awesome holiday floats, marching bands, and people-powered vehicles bedecked with colored lights are streaming down Higuera Street for the 42nd annual Holiday Parade. 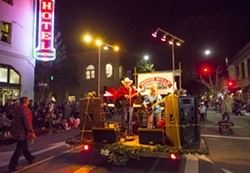 Downtown SLO is packed to the gills! My wife, Anna, and I took a Lyft downtown knowing parking would be at a premium, but this is ridiculous! There's nary a parking spot to be seen. Of course, the streets have been blocked off since 4:30 p.m. and chairs line Higuera Street.

We meet our friend Rakesha Elliot at McCarthy's Irish Pub for a pre-parade drink, and then we make our way to Mother's Tavern, where Patty Kirby; his wife, Sarah; and their wee daughter, Veda, have set up chairs on the street.

This is a real hometown affair, and almost immediately we see our friend Kathy Richard in a green elf outfit on skates pushing her two kids in a double-stroller festooned with Christmas lights. It's the same stroller I see her running with almost daily, and on skates it moves even faster as she travels in circles down Higuera. Kathy pulls up as Veda walks over to say hi and gets a cookie Kathy is handing out. Score!

Veda bounces up and down as she eats her cookie, waving a lighted wand her parents bought from a street vendor. Suddenly a group of young martial artists in bright white Karategis walk by, and I can't help but yell, "Cobra Kai! Sweep the leg!" and "Here, power, whole body, one inch!"

What can I say? I love The Karate Kid.

Soon youth percussion group the Bucket Busters comes thumping down Higuera on a trailer pulled by the Music Motive van. About 10 of them play plastic buckets in perfect time as the crowd nods along.

This year's theme is Holiday Hoedown, and my favorite entry is a little boy on a mechanical horse that, as he bounces up and down, scoots forward about a foot at a time. It looks like a lot of work, and even though we're just a couple of blocks from the end of the nine-block parade route and he's been bouncing forever, the little cowboy is still riding his steed like it's fresh out of the stable. Sure, there are bigger and more elaborate floats, but this little kid is the epitome of what this parade is all about—friends and neighbors cheering each other on as we all get into the holiday spirit.

Soon the Cal Poly Marching Band comes strutting down the street, and the brass section stops right in front of us as the tuba players busts out some sweet dance moves, the big bells of their horns surrounded by white Christmas lights. So awesome!

Then a large flatbed trailer towed by a big-rig rolls by with dozens of Future Farmers of America (FFA) kids in Western wear riding along and dancing to country Christmas music. A lighted Christmas tree stands tall in the center of the flatbed.

They're followed by the ladies of Central Coast Roller Derby. These gals can skate circles around me!

"I've always wanted to do that," Rakesha squeals. "It looks like so much fun."

Here come a bunch of people on unicycles, their wheels all lit up. That also looks like fun! Then comes slapstick stuntmen Mark Wilder and VonJon from the juggling and acrobatic squad Something Ridiculous on really tall unicycles! They pause their bikes, face each other, and juggle glowing batons between them as the crowd erupts in cheers!

Eventually classic carolers, Parade Marshall Bob Douglass, and even Santa Claus cruise by the crowd, estimated to be upwards of 10,000 people. It's official! I'm in the spirit! Merry Christmas, happy Hanukkah, cheery holiday! God bless us, everyone! Δ