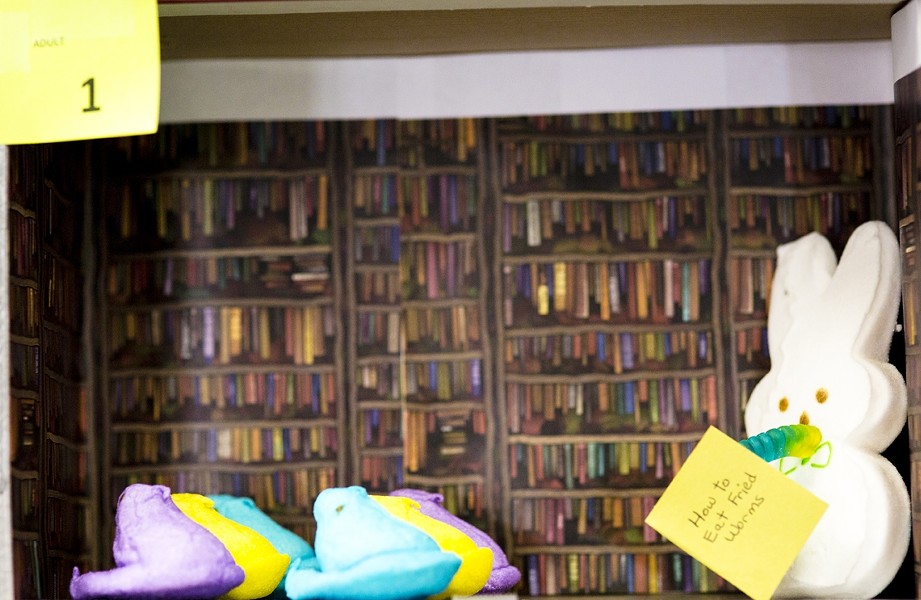 The marginally edible springtime candy known as the Peep is back again as the preferred art medium of the San Luis Obispo County Library system. For the second year in a row, the library invited participants to “design and build a Peeps diorama of your favorite poem or nursery rhyme” adding, as though the connection were obvious, “April is Poetry Month!” April is also National Youth Sugar Overload Month, second only, perhaps, to that other pagan-cum-Christian candy extravaganza, Halloween.

Although the Peeps diorama contest is ostensibly inspired by poetry month, let’s be honest—this is the ultimate excuse to play with your food. It’s sponsored by the library, has something vaguely to do with poetry (a literary form most children have not yet learned to hate), and its artsy-craftsiness adds an additional level of legitimacy. Plus it’s competitive, and “the diorama that receives the most votes, wins!” My fingers already feel sticky with anticipation.

The entries are on view now at San Luis Obispo, Morro Bay, and Nipomo branches (“check with Cambria Library for different dates and rules,” advises the library’s website). In the “adult” category, a diorama fittingly set in the library itself features a large, white marshmallow bunny reading the children’s classic How to Eat Fried Worms to a captive audience of multicolored marshmallow chicks. For added humor, the bunny also appears to be eating a gummy worm. The textual reference is clear, but what’s not clear is how the bunny can be reading aloud with another candy protruding from the place where its mouth should be. Then again, people who ask too many questions don’t get any gummy worms.

The standout entry as of press time is Kendra Madonna’s surrealistic vision of Peeps in owls’ clothing, enigmatically titled The Claw. Maybe I missed the poetry/nursery rhyme reference here, but who cares? Owls are awesome. A purple marshmallow chick and a large white marshmallow bunny (of the same species as the one reading with its mouth full) have been mutilated to resemble the nocturnal hunter, with blue and white feathers forced into their squishy bodies and the bunny’s ears amputated. They are captured in triumphant flight, suspended above a stream in which a yellow peep, torn in half, and a handful of goldfish crackers loll—the owls’ presumed prey.

Madonna also took the library up on the option to “write an original poem if you like and include the text,” which she has pasted onto the side of the box. The result is a neo-imagist masterpiece somewhere between the work of Lorine Niedecker and animal-obsessed German absurdist poet Christian Morgenstern:

The claw, not the owl, is the prime mover here, and its operations dictate the behavior of the feathered beast attached to it. This is the world of owls—we’re just living in it.

These saccharine delights may already be on clearance at the grocery store, but you’ve still got until May 3 to vote for your favorite Peeps diorama at participating library branches. They’ll also have a number of poetry anthologies and editions of Mother Goose on hand, in case you want to start planning ahead for next year. As poet William Carlos Williams so famously preached: “No ideas but in Peeps.”

Arts Editor Erin C. Messer knows that to make an omelette, you have to break a few Cadbury eggs. She can be reached at emesser@newtimesslo.com.