The SLO County Stumblers release their debut album on Aug. 1

I think of old-timey string musicians as folks who share an arcane language. It doesn't matter where they're from or if they've ever met before. Because they share this secret idiom, they can pick up their instruments and speak to one another like they've been conversing their whole lives. They share knowledge of the same collection of traditional music and know the innate grammar and syntax of old-time string arrangements. Listen to the SLO County Stumblers' debut album All the Good Times and this shared language will become abundantly clear. 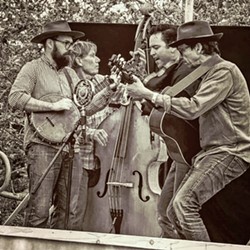 Technically, the quartet's new album was released digitally and on vinyl on July 10, but on Aug. 1, CDs will be available through Bandcamp and local record stores. If you're a fan of old-time string music, you'll want a copy. I recommend the handsomely put together 12-inch record that's limited to a 500-copy pressing. Hearing that needle drop and listening to the warm analog sounds of the band simply adds to the experience.

Formed a few years ago as the house band for the annual Pozo Saloon Old Time Music Gathering, the SLO County Stumblers pretty much stumbled into one another. Fiddler Casy Meikle had been living in Tennessee when he decided to pack up his truck and head back to California. An old friend introduced him to former New Times political cartoonist Jerry James, an upright bass player who started the Pozo festival. James arranged a jam session at his house, where Meikle met banjoist Daniel Bohlman, and eventually James and Bohlman introduced Meikle to their longtime friend and guitarist Stuart Mason. They discovered they did, indeed, speak one another's language.

All the Good Times is filled with amazing traditional music. It opens with the classic murder ballad "Willow Garden," which medleys into "Kansas City Reel." Other classics include variations on "Brown's Dream," "Rabbit in the Pea Patch, "Bully of the Town," "Mexican Beans," "Forks of Sandy," "Tennessee Man," "Soap on a Rope," "Elzic's Farewell," "All the Good Times (Are Past and Gone)," "Cherokee Shuffle," and a medley of "Billy in the Lowground," and "Katydid."

This energetic string band drives these songs like a souped-up, moonshine-filled jalopy racing down a dirt road with revenuers hot on their tail. Inspired by the 1920s and '30s golden age of string bands, you'll feel transported to an older, simpler time of county fairs, back porch jams, and multi-generational family reunions.

Local folk duo Bob and Wendy have been using our state-imposed exile to cook up some new songs, which they're currently recording at Damon Castillo's Laurel Lane Studios. The recordings are still under construction, but you can get a sneak peek at some of the songs when they present a livestream performance on Saturday, Aug. 1, at 7 p.m., on Facebook.com/babandwendy.

"All of the songs share the theme of the uncertainty and unpredictability of life," Bob said via email.

One track, "Fault Line," is, according to Wendy, "probably the only song you'll hear that refers to the town of New Cuyama, land of many earthquakes."

"We built this house in New Cuyama/ Perched upon the San Andreas/ Small town life without the drama/ Hope the ground does not betray us/ Living on a fault line/ Oh this house has done some shaking," Wendy sings on the track.

Of "Pelicans," she said, "When everything in town was closed, Bob and I got up early and walked on the beach before the crowds arrived. Sometimes he went surf-matting. The song is about impermanence."

"Here on the sand lovers carved out their initials/ Drew a heart, outlined it with stones/ Little souvenirs, a child's yellow plastic shovel/ Soon will disappear beneath the foam," she sings.

"Gentle Waves of Mexico" is a song "about finding refuge during difficult times," Wendy said.

"Sometimes I feel as fragile as an apple on a tree/ The slightest wave could knock me down, I bruise so easily, easily.../ Hold me now, 'till I have the strength to stand/ I've been treading water 'till my feet can touch the sand/ Hold me now, rock me like the sea/ The Gentle Waves of Mexico will wash right over me."

Wendy's a terrific lyricist, able to conjure a scene in a few lines. Don't miss your chance to see these performed live!

Hard to believe it's come to this, but Vina Robles Amphitheatre has pulled the plug on its entire season, rescheduling most shows for next year. Thankfully, the venerated venue has teamed with Nederlander Concerts to bring you weekly livestreams, continuing this Wednesday, Aug. 6, with last year's New Times Music Awards winner for Best Live Band, Dante Marsh and The VibeSetters (5 p.m. @vinaroblesamphitheatre on Facebook).

Marsh writes island-vibe songs with a blend of funk and soul. His band is tight, he's got a great voice, and even online he'll put on an exhilarating show. Uncork that bottle of Vina Robles wine you have stocked in your wine cellar and engage with the band via Facebook.

Even though Atascadero can't hold its Saturday in the Park concert series live, the city still wants the community to gather remotely for some musical fun. This Saturday, Aug. 1, The Jump Jax will deliver jump blues, swing, soul, and R&B for your listening and dancing pleasure. The virtual concerts will be available live on KPRL AM 1230 from 6 to 7 p.m., as well as the city's YouTube channel and Atascadero Recreation Facebook page from 6 to 7:30 p.m.

"As we work through the summer, we might have an opportunity to host a couple concerts at the bandstand," the city announced. "We will make sure to inform you as those opportunities are available!"

It's a very '90s sound—think Mark Lanegan or Radiohead.

"Feels like flyin'/ Sounds like corduroy/ Like swishin' and swipin'/ Like chasing birds when I was a boy// I never want to leave you/ And I never want to die/ Won't you let me live forever/ Somewhere behind your eyes," frontman Joe Schwab sings.

With Robert Powers on bass and Jake Duarte on drums, the power trio delivers a big sound.

If you have any livestream events, newly released recordings, or music news you want publicized, send details and a high-res photo to gstarkey@newtimesslo.com. Let's keep the local music scene going despite this pandemic! Also, remember that the New Times Music Awards are coming up, one way or another! Entries will be accepted through Monday, Aug. 10. The live event—either in person or livestreamed, depending on the pandemic—is scheduled for Friday, Nov. 13, at SLO Brew Rock. Δ