The SLO Hep C Project wants you to get tested

The month of May is Viral Hepatitis Awareness Month. The SLO Hep C Project wants you to get tested, and is now offering free hepatitis C testing throughout SLO County.

Kris Gottlieb, the finance support and communications coordinator for the SLO County Aids Support Network—which works in conjunction with the SLO Hep C Project—said it’s important to get the word out about the virus, who’s at risk, and what the symptoms are. He said a recently introduced bill could help spread the word. 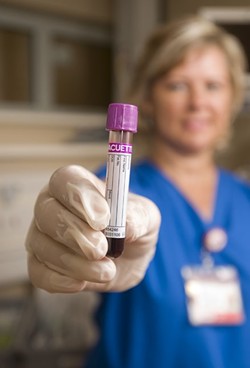 AR 57, a bill recently introduced by state Sen. Bill Monning (D-Carmel) and Assemblymember Katcho Achadijan (R-SLO) would recognize May 19 as Viral Hepatitis Awareness Day in the county, with the aim of spreading awareness and understanding about the virus. Gottlieb said it’s a big deal on the local level.

“We’re really trying to spread the word through social media and so forth,” Gottlieb said. “It’s really important for people in our community to get tested at least once, regardless of any other risk factor.”

According to the Centers for Disease Control (CDC), hepatitis is a medical condition leading to the inflammation of the liver, caused by toxins, use of certain drugs, diseases, heavy alcohol use, or bacterial and viral infections. The three most common types of the virus are hepatitis A, B, and C.

“It’s especially important for people of the baby boomer generation to get tested,” Gottlieb said. “Three out of four people from that generation are living with hepatitis C. There’s no real certainty as to why that is, just a lot of speculation. Some people think it’s because of outmoded medical practices that were modernized in later years, but again, no one’s sure.”

The World Health Organization describes hepatitis A as viral liver disease ranging from mild to severe, and stemming from a lack of safe water and poor sanitation. Hepatitis B is an infection attacking the liver that is spread through contact with the blood or bodily fluids of an infected person. Both strains of hepatitis have vaccines that prevent the virus.

Hepatitis C is a blood-borne virus spread through unsafe injection practices, inadequate sterilization of medical tools and equipment, and the transfusion of unscreened blood. The severity of the virus can range from a mild illness to a lifelong or chronic illness. The CDC estimated in 2012 that there were 21,870 cases of acute hepatitis C in the United States. The CDC also estimated that 3.2 million people with chronic hepatitis C are unaware they’re infected and exhibit few to no symptoms.

The SLO Hep C Project states that there are 750,000 Californians who are living with the disease. Hepatitis C causes more annual deaths than HIV/AIDS, and is the leading cause of cirrhosis and liver cancer, and the most common reason for liver transplantation in the United States.

“In December of 2013,” Gottlieb said, “the FDA approved the first possible cure for hepatitis C, and from there it just boomed. Now there are several options for the different strains of hepatitis C. The SLO Hep C Project is the only nonprofit with specific services for people living with this virus. We received funding from Dignity Health and now we have program that offers free testing throughout the community. Before, the only way to get tested was through your physician.”

Want to know where you can get that free hep C test? Call 543-4372 or visit slohepc.org for more information.

On April 3, Cal Poly unveiled 12 new electric-vehicle-charging stations on campus, as a part of an ongoing effort to provide better alternative transportation options. The project was funded by a $150,000 grant from the California Energy Commission (CEC). The charging stations are located in the Grande Avenue parking structure near the Performing Arts Center, and at the parking lot across the way from the Kennedy Library, which also hosts Zip Car parking. Both locations are near highways 101 and 1, making it easily accessible to people traveling through the area, as well as for local residents.