The SLO Jewish Film Festival is back at the Palm

What is a Jewish film? If it’s simply a film about the Jewish experience, then anyone, regardless of religion or ethnicity, can make one. If it’s a film by a Jewish director, then Ghostbusters, Fargo, and 2001: A Space Odyssey all fit the bill. Jewishness is such an integral part of American entertainments—from music to theater to film—that its influence can feel almost invisible.

Thankfully, however, there’s the San Luis Obispo Jewish Film Festival, an annual event that serves as a reminder of the understated yet profound artistic legacy of Jews in America and around the world. (Did you realize “God Bless America” was written by a Jew? I didn’t either, until I saw Michael Kantor’s Broadway Musicals: A Jewish Legacy, which is set to screen at the festival.) Organized by the Jewish Community Center, the festival runs one weekend only (Saturday, Jan. 11 and Sunday, Jan. 12) but boasts an impressive program.

The event kicks off on Saturday night with a reception with the filmmakers at Luna Red. Right after that, the party will move to the Palm Theatre, where the festival will present its Lifetime Achievement Award to director Peter Riegert, followed by a special screening of his 2004 feature film King of the Corner, adapted from Gerald Shapiro’s “Bad Jews and Other Stories” and starring Riegert himself alongside Isabella Rossellini, Frank Wood, Eli Wallach, Rita Moreno, Eric Bogosian, and Beverly D’Angelo.  A Q&A with Riegert will commence after the film.

On Sunday, however, is the main event. A strong and eclectic lineup of Jewish films (whatever that means!) will hit the Palm Theatre, from shorts to features to documentaries. You don’t have to be Jewish to enjoy these films—just interested in a good story. Below are a few picks. 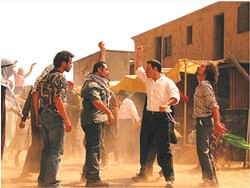 Ari Sandel’s light-hearted musical comedy romp through the West Bank (just typing those words feels … odd) follows star-crossed lovers David (Ben Newmark), an Israeli soldier, and Fatima (Noureen DeWulf), a Palestinian cashier, whose families own two dueling falafel stands. I don’t want to give anything away, but there’s singing, camels, professionally choreographed snapping fights, and at least one instance in which “hummus” is misheard as “Hamas.”

An Oscar-winning short, West Bank Story is totally ridiculous, but it’s also strangely cathartic. And despite the cartoonishness of the feud between Hummus Hut and Kosher King, there’s a certain wistful romance in the story that feels true to its source material—even as it parodies it.

(It’s an oddly fitting parody, too, as West Side Story was originally conceived as a love story between a Jew and a Gentile; another fact brought to you by Broadway Musicals: A Jewish Legacy.)

Running time is 21 minutes. Screens Saturday, Jan. 12 at 7 p.m., along with—what do you know?—Broadway Musicals: A Jewish Legacy. A Q&A with lead actor Ben Newmark and a Broadway musical sing-a-long will follow. 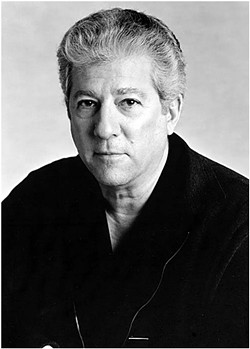 50 Children: The Rescue Mission of Mr. and Mrs. Kraus

Steven Pressman’s documentary 50 Children is the only film in this year’s program having to do with the Holocaust. It’s a difficult subject, I imagine, for a Jewish film festival to engage with: The kind of thing one would be wrong to dwell on, yet perhaps equally wrong to ignore. Fortunately, 50 Children strikes just the right note of optimism and hope in the midst of tragedy, and emerges as a kind of bittersweet feel-good film.

It’s the story of the extraordinary Gilbert and Eleanor Kraus, a Jewish couple from Philadelphia. In 1939, the couple, who had two kids of their own, went on a mission to rescue 50 Jewish children from Vienna and bring them to the United States.

What’s truly astonishing about their story is how much opposition the couple faced, not merely from the American and German governments, as one would expect, but from their own friends and the Jewish community at home. By all accounts, in fact, most people the Krauses brought the idea to seemed to think the rescue mission would do more harm than good: that it was too dangerous, for example, or would direct more animosity toward the Jewish community at large.

Interviews with historians, the Krauses’ children, and (most poignantly) the living members of the 50 children the couple saved, create a compelling picture. The story is told through Eleanor Kraus’ journal entries from the time, narrated by Mamie Gummer, along with archival footage and photographs. Eleanor’s perspective is alternated with the memories of the surviving Jewish children, now entering old age and with no trace of an accent, yet still able to vividly recall the journey.

Reenactments are used sparingly, and only to add detail—the tap of painted nails on a typewriter, for example, or the closing of the door to the hotel elevator, in which Eleanor, on the eve of their departure, found herself riding alongside two fascist heads of state.

People who learn about something long after it has occurred tend to fall into a kind of mental trap: We begin to view history as a smooth and obvious progression of events, in which all actions, heroic or otherwise, were simply a matter of course. In other words, we forget about struggle and self-doubt; we forget how easily the history we know could have been radically altered. But 50 Children reminds the viewer how easily the Krauses’ plan could have gone awry, and how foolish an idea it might have seemed at the time. The film also reminds us how little anyone in 1939 actually knew of the impending Holocaust, despite the growing persecution of Jews in Europe.

The success of the Krauses’ mission is a given—it’s the reason for the documentary in the first place—but 50 Children nonetheless keeps the viewer in suspense.

Running time is 62 minutes. Screens Saturday, Jan. 12 at 10:30 a.m. along with the 23-minute short Beautifully Esther. A Q&A with director Pressman, as well as Beautifully Esther filmmakers Yoni Reiss (editor) and Russell Bell (cinematographer) will follow the screenings. 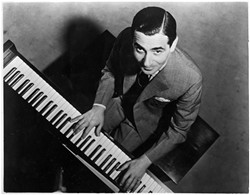 Director Ziad Doueiri’s narrative feature, based on a novel of the same name by Yasmina Khadra, engages the subject of suicide bombers in a personal, understated, and ultimately unsettling way.

At the heart of the story is Dr. Amin Jaafari (Ali Suliman), a prominent Arab-Israeli surgeon living in Tel Aviv. In an opening scene, we witness Amin accepting a prestigious medical award. He’s the first Arab to receive the honor, he notes in an eloquent acceptance speech, expressing gratitude for the opportunities he’s been given in Israel.

Amin, a secular Muslim, appears to have assimilated seamlessly into his adopted homeland, and for a moment we believe in the message of tolerance and cosmopolitan sophistication conveyed by the scene. The next day, however, everything explodes. After a bombing at a local restaurant, the victims are rushed to the hospital where Amin works. His wife, Siham (Reymond Amsalem) is among the dead. To make the situation worse, the Israeli police believe that Siham was the bomber, and that Amin was involved in the plan.

What unfolds is an intriguing and nuanced mystery, and a quietly powerful performance by Suliman. Amin is genteel and restrained in the face of hostility, but his quest for answers—was Siham really the killer, and if so, what drove her to commit such an atrocity?—reveals a startling intensity. More surprising still is the purity of Amin’s anger, which appears an honest expression of grief and disbelief—rather than an extension of deeply rooted bitterness toward one group or another, the kind of attitude which seems to surround him both in Tel Aviv and in the Palestinian territories, where he travels in search of the truth.

Tracing a clue back to his hometown, a radical city on the West Bank, he makes the chilling discovery that Siham is now celebrated there as a martyr.

We meet Siham only through brief flashbacks, but Amsalem nonetheless delivers an emotional and layered performance in these short vignettes, allowing us to see how a beautiful, wealthy, and seemingly happy Jewish woman could become radicalized.

We see much more of Evgenia Dodena, who plays Amin’s colleague Kim with sensitivity and intelligence. Kim remains supportive of Amin despite the police and community’s suspicions, even letting him stay in her home. But a disagreement between the two late in the film seems to touch on the misunderstanding that persists between their two cultures, despite the maturity and open-mindedness of both Kim and Amin.

Raised in Lebanon, director Doueiri left home to attend San Diego State University, going on to work as a camera assistant on several Tarantino films. He co-wrote the screenplay for The Attack with his wife, Joelle Touma, and has said he intended the film to start a dialogue about terrorism. Unfortunately, The Attack has been banned in almost every Arab country, at the urging of the League of Arab States, which cited a rule prohibiting Lebanese citizens from working in Israel. However, Doueiri told the L.A. Times in June of 2013 that he believes the ban had more to do with the film’s refusal to demonize Israelis.

But this unwillingness to choose sides, of course, is one of the film’s chief strengths, and perhaps one of the universal attributes of all good cinema. On both sides of the cultural and religious divide, we encounter people who are hateful and violent, and others who are generous and kind. The world of The Attack is not black and white but made of subtlety, ambivalence, and surprise. Anything else would be propaganda.

Running time is 103 minutes. In Hebrew and Arabic with subtitles. Screens Saturday, Jan. 12 at 1:30 p.m., followed by a Q&A with director Doueiri.