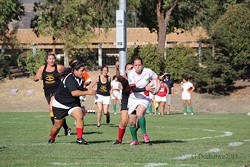 Rugby—what some might deem as the European version of American football—is starting to gain some popularity here in the good ol’ US of A. Rugby is quickly becoming one of the fastest growing sports in college, and is returning to the 2016 Summer Olympics in Rio de Janeiro. The United States won Olympic gold for rugby in 1924, the last time the sport was a part of the Olympics.

San Luis Obispo has already tapped into this growing popularity with SLO Rugby Club, which was founded in 1966. The SLO Rugby Club is hosting the 29th annual Tri-Tip Sevens Tournament. On Sept. 6, 36 men’s and 12 women’s teams from all over the state will be competing in a series of matches from 9 a.m. to 6 p.m. The national men’s and women’s teams of Mexico will be competing, as well as the winners from last year’s tournament, the Belmont Shore Rugby Club. The event is being held as a fundraiser for SLO Rugby’s nonprofit corporation, which funds the education of coaches, referees, and scholarships for youth players.

“American football grew from rugby,” said Reggie Greenwood, the director of youth rugby. “But the best part about rugby is that everyone can handle the ball, and [the play] does not stop.”

“The game is very exciting to watch due to the short duration of each match,” Greenwood said. “Newcomers will see the same things they enjoy about football, with more action that does not stop. We will have 110 matches on four fields for 10 hours.”

The event will feature a tri-tip barbecue starting at 2 p.m., with tri-tip, beans, salad, and bread available for $15. In addition, the Figueroa Mountain Brewing Company will have a beer garden, and Central Coast Brewing will offer locally crafted root beer. T-shirts, key chains, and other merchandise will be available, and all proceeds go to benefiting the local youth rugby teams.

The event will be held at the Damon-Garcia Sports Fields in San Luis Obispo at 680 Industrial Way. For more information about the event, go to slorugby.org, or email Reggie Greenwood at sloreg@gmail.com.

Art After Dark will be coming back to downtown Paso Robles on Sept. 6 from 6 to 9 p.m. Thirteen venues will be participating in this year’s wine and art stroll, including the Artisan, Thomas Hill Organics, and La Cosecha, which will all be running drink specials. Several wine tasting rooms will showcase live music, handmade jewelry, and other forms of art, while participating art galleries will host artist receptions. There is no charge to attend this event. For more information about Art After Dark Paso, or to find a fill list of venues, go to artsobispo.org, or contact ARTS Obispo Program Director Lori Lerian at 544-9251, Ext. 14.