Promoting disc golf, one throw at a time 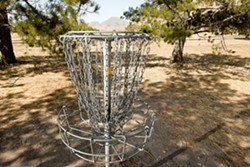 Disc golf, Frisbee golf, or frolf, anyone? San Luis Obispo’s definitive disc golf club, the SLO Throwers, has financed and constructed three disc golf courses in the county over the past six years and has single-handedly established a disc golf presence in the community.

Brian Anderson, one of the founding members of the Throwers, moved from Lake Tahoe to San Luis Obispo to attend Cal Poly and soon realized the quiet college town was missing an integral activity: a disc golf course. After graduating from Cal Poly, Anderson and three of his close friends decided to stay in San Luis Obispo and make their mark on the disc golf scene.

In 2004, they started an online business called PickYourDisc.com; they sold disc golf equipment with the intention of raising enough money to assemble San Luis Obispo’s first disc golf course. Anderson and his colleagues also organized weekly tournaments and soon attracted enough participants to form a club team, eventually deciding to refer to themselves as the “SLO Throwers.”

After much planning and red-tape negotiations, the Throwers finally saw their dream come true. Later in 2004, they were able to finance and construct a disc golf course in San Luis Obispo’s Sinsheimer Park. The course features nine baskets, cement throwing platforms, and uniquely carved benches at each hole, some scrawled with the initials “PYD,” paying homage to the Throwers roots at PickYourDisc.com.

After planting the seed and watching disc golf’s popularity grow in San Luis Obispo, the Throwers decided to bring their vision over the grade and completed an 18-basket course in Atascadero’s Heilmann Park in 2005. The terrain of Heilmann Park provides disc golfers with the ideal obstacles of trees and hills, an element that Anderson says “just makes it fun.”

After the success of their first two courses, the Throwers decided to create a third in San Luis Obispo’s Laguna Lake Park. The large and challenging course has enough area to accommodate 27 baskets—should a tournament require it—and is yet to be completed. Anderson says the Throwers receive no help from the City of San Luis Obispo when it comes to preserving their courses. He elaborated: “We mow the grass, take care of the trash, and maintain the equipment. It’s a lot of work.”

The Throwers are holding their biggest event of the year—the “Ace Race 3”—at Heilmann Park on Oct. 23. Competitors have a chance to win $1,000 and improve their local disc golf course in the process. The Throwers are attempting to raise another $10,000 to install proper throwing platforms and benches and make improvements on both the Laguna Lake and Heilmann courses.

For more information and event registration, check out slothrowers.com.

The SLO chapter of Health Care for All California is sponsoring an interactive event on Sept. 19 at 7 p.m. in the SLO library, featuring the Mad as Hell Doctors, who are passionate advocates of a single-payer, expanded, and improved Medicare for All health program. Dr. Margaret Flowers of “The Baucus 13,” who has been arrested several times for her single-payer activism, will be a speaker. This event is in support of SB 810, the California Universal Health Care Act. For more info, call 434-8978 or visit madashelldoctors.com.

Join the SLO County Bicycle Coalition and get a free T-shirt. Throughout the month of September, the SLO County Bicycle Coalition will be offering a free “I Bike SLO” shirt to anyone who signs up to be a member of the organization. The coalition works to promote cycling and walking for everyday transportation and recreation, and acts as a local voice for positive change for bicyclists and pedestrians. Become a member and support bicycles as a healthy, active form of transportation for all. Visit slobikelane.org to get involved.