The SLOIFF is another rousing success!

The SLOIFF brings out old surf dudes and cinephiles! 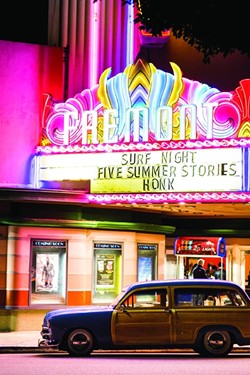 I clearly remember the energy of sitting in the SLO Vets Hall in the late-’70s and ’80s when they showed surf films. It seemed like every surfer in the county would show up and pile into the auditorium. There’d be a buzz of excited conversation, lights would go down, the soundtrack would kick in, and the joints would light up. The idea was to get your stoke on and be excited to hit the surf the following dawn. More often than not, we’d wake up to miserable conditions, made worse by having spent the previous night watching great surf in exotic locales like Hawaii.

On Friday, March 7, the Fremont Theater has that same manic energy as a full house packs in to watch 1972’s Five Summer Stories and listen to Honk play after the surf documentary. I start the evening over at local artist Mark Freear’s house. When my wife and I arrive, he’s got a tri-tip cooking over a wood fire, and soon a couple old pals—former Cal Poly students Mike Allen and David Bender—show up from Santa Barbara, their SUV piled high with surfboards.

After we eat, everyone heads down to the Fremont. Aside from the sound and picture coming out-of-synch toward the end of the film, a good time is had by all. 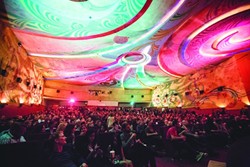 Like a lot of the old-timers in the Fremont, Mark, David, and Mike have every intention of hitting the dawn patrol the next day, but when I text Mark in the morning, he writes back, “We are sooooo hung still.”

It happens. So it’s Saturday, March 8, and tonight The Dude (Jeff Bridges) will be on hand to receive the King Vidor Award, presented by James Cromwell. 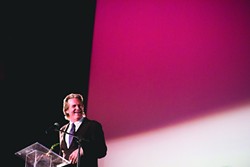 KSBY’s Dan Shadwell is emcee, and I can’t help but agree with a friend who says that the newscaster seems to be an actor playing the part of a newscaster. It’s like he’s almost human, but not quite. 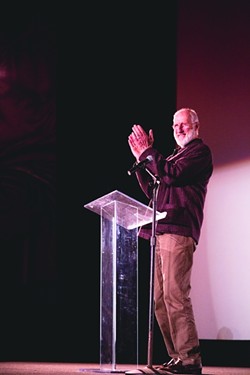 Again, the theater is pretty well packed, and Sarah Linn is presenting an award and says, “I’m Sarah Linn from The Tribune, the paper of record for SLO County.” Next, our Arts Editor Erin Messer gets up to present an award and introduces herself as being from New Times: “We’re sort of the paper off the record for SLO County, if you know what I mean.”

They’re serving White Russians in honor of Bridges’ role as Jeffrey Lebowski, or “Caucasians” as The Dude called ’em. People are sort of sauced. There’s glamour and glitz. Bridges is exuding an air of utter coolness. And it’s all right here in SLO Town. Pretty cool, SLOIFF! You’re classing up the joint again!
Glen Starkey takes a beating and keeps on bleating. Keep up with him via twitter at twitter.com/glenstarkey, friend him at facebook.com/glenstarkey or myspace.com/glenstarkey, or contact him at gstarkey@newtimesslo.com.