The song heard 'round the world

Dozens of plantains. Seven choirs. Four days of singing. Three esteemed judges. And a partridge in a pear tree. Just kidding (about the partridge in a pear tree, not the plantains). After years of competing in choral festivals around the world, San Luis Obispo's Vocal Arts Ensemble finally decided that it was time to host a choral festival and competition in San Luis Obispo. Seven choirs from Finland, Spain, the Philippines, Uganda, and California will participate in the United States' first choral competition for adults June 28 to July 1, the product of years of dreaming and about a year and a half of work.

# "The Vocal Arts Ensemble, it's their 30th anniversary and they've traveled all over the world as an ensemble, and for a long time they've been thinking how great it would be if someone else could travel here," said Patricia Harris, Director of the California International Choral Festival. "Two years ago the board decided to just make it a reality and they decided to hire someone to organize it. They hired me 18 months ago in January of 2006." With a charge to model the festival after one the Vocal Arts Ensemble attended in Spittal, Austria in 1995 and 2004, Harris' first and biggest challenge was to attract an international array of talented choirs. In January she sent out a request for choirs, by October she had received the applications and CDs, and by the beginning of 2007 the festival had a line-up of eight choirs (a choir from Poland would later be forced to cancel due to financial constraints) all of whom ensemble director Gary Lamprecht had heard and approved.

But securing the choirs turned out to be the first in a long series of hurdles. Landarbaso Abesbatza Choir from Spain, Christ the King Choir from Uganda, The Choral Project from San Jose, Imusicapella Chamber Choir from the Philippines, The Philippine Saringhimig Singers from San Francisco, Oulu Chamber Choir from Finland, and Voci di Canto from Santa Rosa each needed a place to stay, transportation to and from concerts and other scheduled events and, in some cases, assistance applying for visas.

"I wasn't sure how getting a visa for all of them would work," admitted Harris. "We had an idea about visas posing a challenge and I've had to send letters to a couple of embassies." The choir that Harris expected would pose the greatest challenge Landarbaso Abesbatza from the Basque region in Spain wasn't as difficult as Harris expected. Instead, it was the Christ the King Choir from Uganda that had the greatest problems acquiring visas problems that ultimately prevented nearly 25 percent of the traveling choir from attending the festival.

"Getting a visa to the USA is not that easy," said Agnes Senkubuge, who is leading the Ugandans coming to San Luis Obispo. "We were originally 25 but only 19 were given visas. This also sometimes happens at the Canadian Embassy or the British Embassy."

The Ugandan choir, which was founded in 1936 and is affiliated with Christ the King Church in Kampala, Uganda, has sung in festivals in Canada, Germany, the Netherlands, Rome, Rwanda, and Kenya. They even visited the United States in 2000. 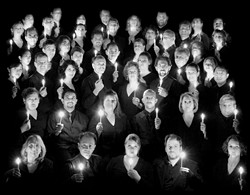 # In order to keep the costs down for the Ugandan choir, Harris arranged for the singers to stay at Hostel Obispo, where they will prepare their own food and live in a communal environment. The Ugandans plan to cook African foods like chapattis, rice pillao, and ground nut sauce, and are hoping to locate plantains, a dietary staple.

The fact that they are the only choir representing Africa doesn't faze the members of Christ the King. "We are used to being the only African country in such festivals and we try to portray the whole Africa," said Senkubuge. "We sing songs from Kenya, South Africa, etcetera. Even the costumes we use are traditional from Africa." For the folk portion of the competition, on June 30, Christ the King Choir which often sings in English at church will sing three songs in three different African languages. "Omuyigo" is a hunting song from Central Uganda sung in Lugandan, "Zaajumeera" is a song about cows from Western Uganda sung in Kinyankore, and a song about losing a husband titled "Musengwa Andhekulire."

Languages that most people have never heard of aside, Christ the King Choir is bringing some unexpected instruments to the competition. They have several different types of drums a long drum called ngalabi, small drums called namunjoloba, and big drums and a xylophone, flute, a stringed instrument called endingidi, panpipes, shakers, and calabashes.

Christ the King Choir's distinctive culture should come especially in handy for the folk song portion of the competition, a segment that Harris references as proof that the festival isn't all church hymns.

"We're trying to override the perception that if you come to the festival you're going to hear church music," said Marketing Director Judith Carleson. "Which you are, but that's not all of it." In addition to creative competition elements, the festival will provide the choirs with the opportunity to meet and interact with locals. They will be attending Farmer's Market on June 28 and on June 30 the choirs will be positioned in various locations downtown singing to passersby. Don't expect your traditional angels singing from on high. Instead, think angelic voices with the added benefit of approachable personalities and distinct worldviews that can inform our own perspectives.

What would an accessible choir be without an accessible and affordable concert? A handful of the concerts and strolls are free, and those that aren't cost $15.

And while the International Choral Festival is definitely cause to 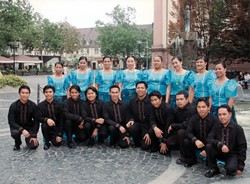 # bask in international goodwill and shared creativity, the competition aspect should ensure that the choirs are at the peak of their vocal abilities. Judges Christian Grube, Charlene Archibeque, and William Hatcher all selected by Lamprecht will be listening to every note, a disconcerting experience for the choir members who sing because they love it, and not because it's their career. For one member of the Vocal Arts Ensemble, watching a judge put a tuning fork in his ear during the competition at Spittal was a moment of revelation, and panic. The experienced judges know what they're looking for intonation, general choral sound, dynamic flexibility, rhythm, and stylistic sense and the audience, which will be selecting the winner of the People's Choice Awards on July 1, knows what it likes. Though, for audience members who would like to make the most educated decision possible, the California International Choral Festival web site has some tips for how to judge a choral competition.

As the thrill of competition winds down at the grand finale awards on July 1, Harris hopes that the tension and excitement will be replaced by something altogether different tears. In an all-too-rare show of international peace and friendship, all visiting choirs will sing "This is My Song" from "Finlandia" by Jean Sibelius, "Cantate Domino" by Jan Pieterszon Sweelinck, and "O Magnum Mysterium" by Morten Lauridsen together. As the lyrics of "This is My Song" state, "May truth and freedom come to every nation may peace abound where strife has raged so long that each may seek to love and build together, a world united, righting every wrong a world united in its love for freedom, proclaiming peace together in one song."

INFOBOX: It's time to fill those date books

June 30 2 to 4 p.m. Choir Stroll, Festival choirs will be positioned in various locations in downtown SLO, and guests can move from location to location, listening to and interacting with the choirs.

July 1 TBA Listen to the choirs sing in local churches during morning services.

July 1, 1 p.m. Choir's Choice Competition, Each choir sings a 12-minute program of their choice and the audience selects one to win The People's Choice Award. $15.

July 1, 7:30 p.m. Grand Finale Awards, Winning choirs are announced and sing an encore of their choice and all visiting choirs sing "This is My Song," "Cantate Domino," and "O Magnum Mysterium" together. $15.

*Unless otherwise noted, all events take place at the PAC.

Arts editor Ashley Schwellenbach sings with the voice of a mandrake. Tell her to stop making Harry Potter references at aschwellenbach@newtimesslo.com.