In the mundane moments of everyday life, as a bus races by or a child jumps off a swing, art can be found, if you look closely, or in between the lines as they say.

Erik Olson, a 67-year-old artist in Nipomo, is fascinated with the lines, curves, and all the other shapes and how they intersect or parallel one another.

“It’s geometric based and has a fascination with light,” Olson said. “It’s the relationship between the parts and how they go together.” 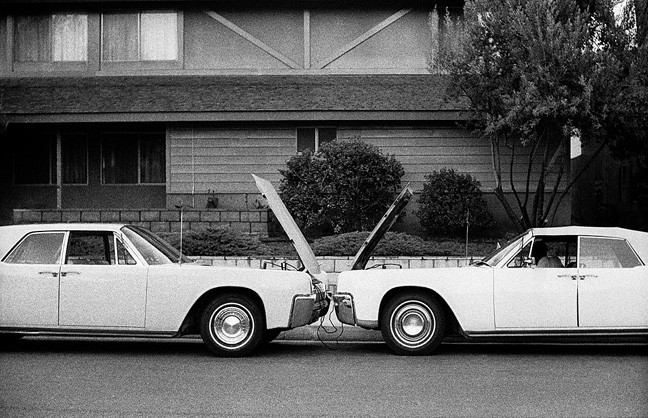 In addition to being a lifelong painter and photographer, Olson previously worked in the film industry as an art director, creating sets for movies like
Last of the Mohicans, Face/Off, and Martial Law.

He also used his passion for design to work in architecture, designing residential homes. In both his careers and his art, Olson zeroes in on the geometric patterns and relationships that are present.

Olson’s work is currently on display in his exhibit of paintings and photographs, Eye Matters, currently at the San Luis Obispo Museum of Art. The name of the show is twofold.

“It’s sort of a double entendre,” Olson said. “They’re all about those little visual relationships.”

One day years ago, Olson was walking to a friend’s house when he saw two cars with their hoods popped facing each other. He was struck by the symmetry present in the V-shape created by the hoods of the two cars and the v-shaped wood paneling on the exterior of the house, just above the car’s level. That relationship is captured in his photograph, titled Two Lincolns One Guy.

“There are connections between the different parts,” Olson said.

Olson said his work is geometrically based and inspired by light. It shows. In another photograph, titled Boarding Bus At Speed, Olson’s still shadow is illuminated and contrasts perfectly with the blurred quickly moving bus zooming under a bridge on Highway 1.

“When you take a photograph all you’re photographing is the light,” he said.

Olson’s series of paintings in Eye Matters features different brightly colored curves and arcs that intersect, parallel, and overlap with one another. He started working on the series, which includes pieces such as Cycles of Life and Spheres of Influence, a week after his cousin died.

“It’s not something you get to see every day,” Olson said of his work. “It’s not just typical landscapes, which you see around here a lot. It’s an opportunity to see a fascination with little things that are often overlooked.”

Eye Matters will be on display at the San Luis Obispo Museum of Modern Art until Feb. 28.

Ryah Cooley is here, there, and everywhere at rcooley@newtimesslo.com.