The spice of life

In the center of a small strip mall in San Luis Obispo, operating under a barely noticeable sign, is an extraordinary taco shop. Since 1995, Fernando Patricio has been grinding chilies, steaming meats, and creating tasty adaptations of foods you might find at a common burrito shop. The result is Tacos De Acapulco, where spicy tomatillos and fresh herbs dance a delightful tango along tastersâ€™ tongues. 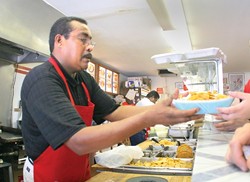 # Tacos De Acapulco is not a white-linen place to linger. The atmosphere is one of a generic taco shop, with a large menu in front of the order counter. The dÃˆcor includes plastic roses and bright murals of Patricioâ€™s native Mexico, but fewâ€”if anyâ€”patrons come for the ambiance. The unusually savory cuisine, coupled with friendly family service, makes the restaurant the neighborhood favorite of frenzied college students, hungry families, and newspaper-reading singles.

â€œItâ€™s just really good,â€? said Matt Kingdon, a Cal Poly student who, after stumbling across the diner, now finds his way back every week. â€œItâ€™s one of the best Mexican restaurants, and itâ€™s especially good during finals week, because itâ€™s fast.â€?

Immigrating to the United States was Patricioâ€™s chance to provide a better life for his family. In Los Metates, a Mexican town without electricity or running water, the family scraped out a living by growing corn on a small plot of land. Then, in 1990, Patricio joined his cousins in California and began working as a sous chef at Albertoâ€™s in San Luis Obispo.

â€œItâ€™s a better life here,â€? Patricio said through an interpreter. â€œWe wanted to have our family together.â€?

After four years at Albertoâ€™s, Patricio opened his own family-run restaurant.

The one dark patch in his past was the ill-fated Taco De Acapulco in Temple City, the first restaurant that Patricio (along with four of his cousins) opened in 1994. It closed eight months after opening. Undeterred, the group opened a Taco De Acapulco a few months later in Grover Beach, followed shortly afterward by another in Chico. In 1995, the partners opened Taco De Acapulco in San Luis Obispo. Patricio runs the establishment, with his son Amador and daughter Rosa at his side.

The gifted family prepares everything by hand, from the salsas to the chorizo.

In the partly open kitchen, Patricio prepares fish tacos by chopping up slices of tilapia, dipping the morsels in batter, and quickly frying the delicate fish. The menu bounds from massive burritos to chile rellenosâ€”a customer favorite. Few diners will complain about prices that range from $1.99 for a taco to $7.50 for a combo plate.

Along with lunch and dinner, Patricio serves breakfasts made up of familiar morning standards, such as homemade chorizo and huevos rancheros.

Staff Writer Karen Velie compiled this weekâ€™s Strokes and Plugs despite burning her tongue on salsa. Send your business news to kvelie@newtimesslo.com.