There’s going to be a ton of great music next weekend at the third annual Seven Sisters Fest—Friday, July 10, through Sunday, July 12, at El Chorro Park off Highway 1 across from Cuesta College—but I’m really looking forward to one in particular, San Francisco’s The Stone Foxes, a bad-ass rock ’n’ roll band that harkens back to the dirty days of ’70s rock. They play at 3:45 p.m. on Saturday.

Their songs have appeared on TV shows like Sons of Anarchy and in commercials for BMW, Jack Daniel’s, and Levi’s. Originally founded by brothers Shannon (vocals, harmonica, and drums) and Spence (guitar, vocals) Koehler, they recently added Vince Dewald (bass, vocals) and Ben Andrews (guitar, violin) of fellow San Francisco band Buxter Hoot’n. The band also features Brian Bakalian (drums, bass, and vocals) and Elliott Peltzman (keyboards and vocals). New Times recently spoke to Shannon Koehler via phone, and he was animated, upbeat, and a little bit manic—just like he is on stage.

Their new album, Twelve Spells, will be released in August, but the band has been releasing one track a month for free, and the upcoming album will features those 12 tracks as well as live versions and extras. What’s the band’s strategy with this approach?

“It’s not really a strategy,” Shannon admitted. “We added three new guys to the crew after we’d been writing songs and recording over last year, jamming and recording in this really crazy recording studio filled with three-eyed mice, an inflated boat, old cars, and tons of pennants—imagine if your dad had a really cool garage but you’re just recording in it with good microphones and over time you’re getting these great songs. Well, we got these cool songs, so let’s not sit on them. Let’s put ’em out one at a time and do a collection that’s like a story, and we all got together, and it’s just gelled into new thing.”

OK, he said all that in, like, one breath, so I asked him if he was afraid it’d be tough to sell a record after you’d given all the tracks away for free over the last year. I mentioned how I’d just spoken to Derek Trucks, who’d recorded a new album with his band but wasn’t planning to play any new songs off it until after it was released in fall.

“I’m not really afraid of much,” Shannon boasted. “We’re not thinking about it like that, and Derek Trucks is Derek Trucks. For us, we just want people to enjoy the songs. With Spotify, people are listening to the songs anyway. As an artist, I don’t give two shits about album sales. I don’t think our manager would like me saying that, but people are going to get the music anyway, and that’s not how bands make money anymore.”

The band’s been trying to tie releases to certain events. One track, “Cold Like a Killer,” was released at SXSW when the band was there to play nine shows in four days. Another came out when Entertainment Weekly wrote about them. And anyway, said Shannon, they’re making money from song placement in TV shows and in commercials.

“That stuff’s huge. And because of it, we decided to not take a bad record deal. We’ve got all the pieces of the team except a record deal.”

One of the things that makes this band so cool is that they care about issues such as homelessness, income inequality, the Occupy Movement. But even though their music is clearly political, can it make a difference?

“I think you can make people see the world differently if you can inspire them to listen to lyrics,” Shannon said, “but we’re not pushy about it. We don’t get up and say ‘this next song is about whatever cause.’ What we’re about is making a community during a show. We’re people, and we want people enjoying us as people sharing a communal experience. If people want to listen to the lyrics and if they speak to them and inspire them to do something, great. For a while now we’ve been asking people to bring non-perishable food in exchange for a 7-inch record. Then we donate it to the local food bank. If it becomes a habit for folks to take food to the local food pantry, that’s great. We just hope we can inspire people to rethink what they’re doing with their time.”

Shannon also mentioned how the band has been getting a bit more varied in their sound. Instead of each song being pedal to the metal, they’ve been experimenting with Ennio Morricone-style dark, moody Western sounds. They also play some select covers like Slim Harpo’s “I’m a King Bee,” “Rollin and Tumblin” by Muddy Waters, and “Little Red Rooster” and “Spoonful” by Willie Dixon.

The band’s statement pretty much sums up their attitude: “It’s been decided, we don’t wanna be anything but a rock ’n’ roll band. We wanna hit hard, go fast, get low, get moody, and just do what feels good. We’re on a mission to bottle up all the energy, the impressive amount of sweat, and the outrageous fun we have playing live, and give it back to the rest of the humans as a record. We’re six dudes who believe that rock ’n’ roll can move mountains, and we’re gonna play it till we move one.”

All the details, as well as tickets for three-day or daily passes, are available on the festival website, sevensistersfest.com.

Man, I love me some Cracker. The band that grew from the ashes of Camper Van Beethoven released some great music: “Low,” “Get Off This,” “Euro-Trash Girl,” “Happy Birthday to Me,” “I Hate My Generation,” and a bunch more.

On Monday, July 6, Good Medicine Presents Cracker at SLO Brew (7:30 p.m.; 21-and-older; $20 presale or $23 at the door). The band released its 10th record, Berkeley to Bakersfield, last year, and the double album sums up the band’s propensity for keeping one foot in alt-country music and the other in alt-rock.

As founding member David Lowery explains in press materials, “On the Berkeley disc, the band is the original Cracker lineup—Davey Faragher, Michael Urbano, Johnny [Hickman], and myself. This is the first time this lineup has recorded together in almost 20 years. We began recording this album at East Bay Recorders in Berkeley. For this reason, we chose to stylistically focus this disc on the music we most associate with the East Bay: punk and garage with some funky undertones. To further match our sense of place, we often took an overtly political tone in the lyrics.

“This Bakersfield disc represents the ‘California country’ side of the band. Throughout the band’s 24-year history, we’ve dabbled in country and Americana, but this time we wanted to pay homage to the particular strain of country and country-rock music that emerges from the inland valleys of California.”

Visit slobrewingco.com for a complete lineup of Good Medicine shows at the Brew, and take note that Good Medicine brings a free show this Friday, July 3, to Tooth & Nail Winery with The Coffis Brothers from 5 to 9 p.m. 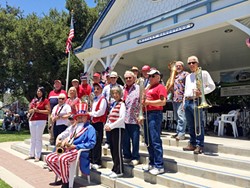 The ever-popular Village Band plays the Rotary Bandstand in the Village of Arroyo Grande on Saturday, July 4, at 1 p.m. with two sets of patriotic music. The South County Historical Society will set the mood with traditional red, white, and blue decorations, period costumes, and a barbeque.

Central Coast LIVE! wants to make you a star!

Central Coast LIVE! is a new media broadcast company bringing live streamed video and Internet radio broadcasts of local bands from local venues to the Internet. The company, headed by Brad Golden, offers coverage to watch from home or on the go with a mobile device.

The company recently partnered with D’Anbino’s Paso Robles tasting room, where they streamed a concert by local Grammy Award-winner Louie Ortega with his band Louie and the Lovers, and viewers logged on from as far away as Japan. New Times conducted an email interview with Golden.

New Times How does your service make money?

Brad Golden Currently, we’re not making money. Although we originally planned to offer a pay-per-view format, we decided that model would potentially present a block to entry as most people would not want to plunk down money for a band they hadn’t heard before. So, we’ve opted to offer our live streams
for free with the intention to build a viewer base, which will ultimately attract sponsors.

NT Do you only record shows at D’Anbino?

Golden D’Anbino is our first venue. We intend to open at other venues if the numbers support it.

NT What makes you think there’s a market for this service?

Golden This is a new model, so mine is an educated guess that there’s a market for this platform. Both streaming music and streaming video are where we’re headed in the near future for music. We’re also excited to share with folks how they can easily watch our content on their televisions.

NT Do you think venues may be concerned about attendance if fans can watch a show from home for free instead of coming out and supporting the artists? 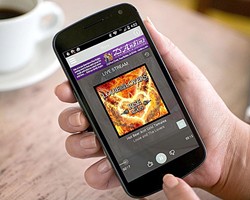 Golden This is a great question and actually one that I’ve received multiple times. My response is that people who go to concerts love going to concerts. It’s not the same thing. It’s tangible, immersive, communal, and experiential. The sights; the sounds; the smells; the vibe; and, depending on the gig, the sexual energy—it’s just not the same. This will never stop people from going to concerts. However, there are times where I might not feel like going out but if I knew I could watch a live, local concert from the comfort of home, it’d be the next best thing.

NT Are artists compensated for their work?

Golden We’re all about the artists. We want to help local artists thrive, and we’re encouraging fans to support local music. I’m a musician myself, and it’s extremely important to me that everyone wins—the artists, the venue, the fans, and us as a broadcaster. Currently, we neither charge nor pay the artists for our live streams. What they get is a free, professionally produced, multi-camera, high definition, live video broadcast that will be archived for future, on-demand viewing, if they give us permission for archival. If this proves to be a profitable venture, then we’ll definitely build in artist compensation. In addition, we’re in development of a virtual tip jar that will be present adjacent to the video display for both live and on-demand videos, the proceeds of which will all go 100 percent to the artists.

Submit your music to the New Times Music Awards, either online or by filling out the entry form on page 14 and bringing it to our office. Entries are due Monday, July 6, by 5 p.m. ($10 per song entry fee). Readers Choice voting runs from July 30 through Aug. 13. The awards and showcase happens Friday, Sept. 25, at the Fremont Theater, and musicians must be able to perform that evening to be eligible to win.