The stuff of dreams: Indica Design 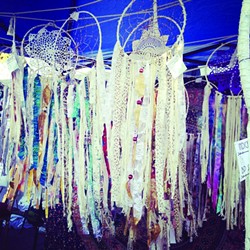 According to legend, dreamcatchers allow only good dreams to pass through the net and down to the sleeper below, while bad dreams remain tangled inside the net, disappearing with the light of day. Similar to the webs of a dreamcatcher, 21-year-old Erica Kim has come to possess a special dream all her own with Indica Design.

As the creative force behind Indica Design, Kim sells elaborately constructed dreamcatchers she describes as unconventional and eclectic. In the past year, Kim has developed her project from a part-time hobby into a lucrative venture.

“One day, I was looking on Pinterest and saw how expensive dreamcatchers were selling for,” Kim said. “I knew I could make them cheaper, so I literally went to the store to buy some supplies, went to my room, and started crafting.”

Initially, Kim designed dreamcatchers only for herself, but it didn’t take long for friends to come asking for a bohemian dreamcatcher of their own.

“My roommates would bring people over all the time, and they would make comments about how much they loved the dreamcatchers I was making,” Kim said. “They wanted to have their own personalized dreamcatcher, and that’s kind of how it got started.”

In response to all of the positive feedback she received, Kim began to grow Indica Design by setting up an account on Etsy.com to sell to a larger audience. A couple of months later, Kim had convinced the owner of Ambiance, a trendy clothing boutique located in downtown San Luis Obispo, to sell her dreamcatchers in-store.

“They can customize their dreamcatcher any way they want,” Kim said. “Customers can pick the size of the hoop, whether they want a doily or woven web in the center, the color scheme, as well as any add-ons like feathers, beads, or flowers.”

Upholding Indica Design’s company motto to go forth in the direction of your dreams, Kim was able to produce enough dreamcatchers to book a vendor booth at Melrose Trading Post, a popular outdoor market in Los Angeles. The overwhelming response from customers at the market only further solidified Indica Design as a legitimate long-term business opportunity.

“I’ve wanted this for so long, and it was then I knew that my path in college wasn’t for me,” Kim said.

Kim has big plans for her future, some of which include the addition of a clothing line and establishing a stronger network in Los Angeles. At Melrose Trading Post, Kim was offered a potential business proposition to set up a booth at Free People’s company showroom—an opportunity that would give buyers the option to select her dreamcatchers to be sold at stores all around California.

Looking back at how far Indica Design has come, Kim is excited for what awaits her business in the future and couldn’t be happier about how things turned out.

“If you have that creative idea, go for it,” Kim said. “There are so many opportunities in the world. You can’t let them pass you by.”

To buy a dreamcatcher of your own in- store, visit Ambiance at 737 Higuera St., or order online at etsy.com/shop/indicadesign.

Central Coast Nutrition Conference is hosting “Eat Fat, Grow Thin,” a nutritional seminar featuring a wide variety of speakers discussing a low carb, high-fat lifestyle on Saturday, March 1, at Marriott Courtyard in San Luis Obispo. Ticket prices are $75 for one ticket, $65 for two to four tickets and $55 for more than five. Lunch is included. To register, call 772-3560 or visit their website at ccnutritionconference.com.