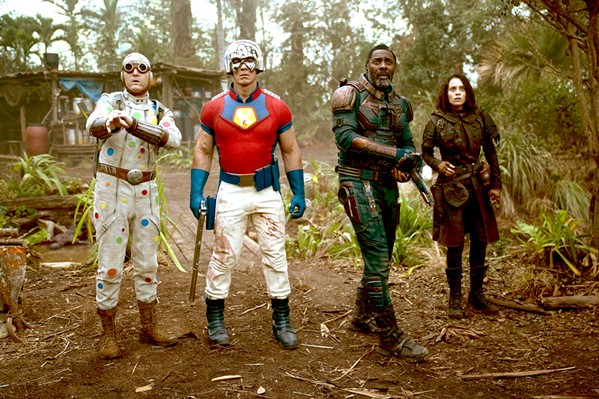 Writer-director James Gunn (Super, Guardians of the Galaxy) helms this outrageous new installment of the Suicide Squad franchise. I can almost imagine Gunn's pitch to Hollywood's money people: "We airdrop a bunch of homicidal reprobates into an island jungle for a gory, bloody battle, and they have to fight their way to a secret installation where for 30 years an alien starfish has been experimented on, and it gets loose and rampages like a giant kaiju across the island amassing a zombie army of people whose brains are controlled by smaller starfish."

It's violent, funny, wicked, madcap, subversive, and occasionally emotionally resonant, and it has Sylvester Stallone voicing King Shark, a dumb but lovable anthropomorphized great white with a taste for human flesh. The flick's sort of wonderful and ridiculous, and it's much better than earlier incarnations. (132 min.) Δ