The Suitcase Junket brings his raw, one-man-band blues to Bang the Drum Brewery on Sept. 30th

In his video for “Eileen,” Matt Lorenz (aka The Suitcase Junket) sits in the woods behind The Amity House of Amherst, Mass., surrounded by refuse—discarded lumber, errant bricks, an ice chest, an old bicycle, and an upended wheelbarrow. In his hand is an acoustic guitar with a sunburst paintjob and what looks like a homemade resonator, a guitar that he salvaged from a dorm room dumpster. On his middle finger is a broken jagged-edged glass bottleneck. At his feet are a high-hat peddle, a string of beads around the high-hat, along with some other foot-operated percussion, including a bass drum peddle to beat upon the box on which he sits and a box of bones and forks. He adjusts an old Fatboy microphone before ripping into a blistering and raw slide-guitar blues tune filled with one-man-band jangly percussion. “Eileen, why don’t you care for yourself?” he sings in a plaintive wail. 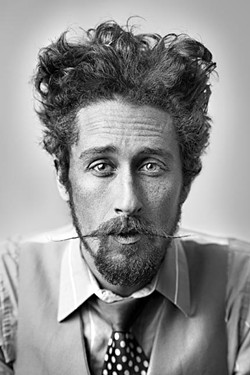 I don’t know about you, but I love this kind of stuff. Lorenz has a shock of dark hair piled so high it would make Lyle Lovett smile. His villainous mustache cuts across his face like a railroad crossing, waxed to needle-sharp points. He’s a wild man and one of New England’s best-kept secrets who has a mysterious way of whistling/throat singing into his mic.

“Artist, tinkerer, tunesmith, swamp Yankee—Matt Lorenz is a one-man salvage specialist singing into the hollow of a Dumpster guitar, slipping a broken bottleneck onto the slide finger, railing on a box of twisted forks and bones, rocking till every sound is ragged at its edges, till the house is singing back. Then, unplugging all the amps and letting one mountain ballad soar over the raw strings on that guitar,” his bio reads. “Every night is a hard-driving, blues-grinding, throat-singing search-and-rescue junket. Sooner or later everything rusts, busts, and gets tossed into the junk heap: iron, bones, leather, hot rods, muskrats, the night, the heart. The goal is to recover it. To waste nothing. To create new ways from old. This is The Suitcase Junket.”

Do yourself a favor and go online and check out some of his videos and live recordings, and then plan on heading to Bang the Drum this Friday, Sept. 30 when The Suitcase Junket and opening act Dan Curcio (of Moonshiner Collective) play a 7 p.m. all-ages concert ($10 presale at ticketfly.com or $12 at the door). This is just one of three Good Medicine Presents shows this week. 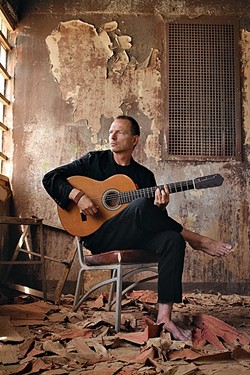 The international guitar and New Age music superstar was born in Cologne, Germany, to a Chinese-German father and Hungarian mother, taking up the guitar at age 11. He did the youthful rock ’n’ roll thing in both Germany and Boston before settling in Santa Fe, N.M., and turning his musical pursuits into thoughtful instrumental meditations, forming the first incarnation of Luna Negra in 1989, where he recorded the Spanish music influenced Marita: Shadows and Storms. He printed one thousand copies and sold it at Santa Fe artist Frank Howell’s gallery. Eventually it started getting radio play, and then the Higher Octave label remastered it and released it as Nouveau Flamenco. It eventually sold double platinum in the U.S., launching Liebert into superstardom.

“I was honestly happy playing this music in hotels and restaurants in Santa Fe, and going in one year from doing that to opening for Miles Davis was a pretty intense jump,” Liebert said in press materials. “Most shocking for me was to realize how many different people from so many diverse cultures embraced it. I still get letters from fans in Europe, South America, Australia, and Asia. … It’s been a really gratifying experience. I’ve had the opportunity to play in a wide variety of cultural settings with musicians from around the world, and that has been a great experience, too.”

Liebert is now one of the most successful instrumental artists in the world, and he continues to release stirring recordings, five of which have been Grammy-nominated for Best New Age Album. His 26th studio record, Waiting n Swan, was released last year. 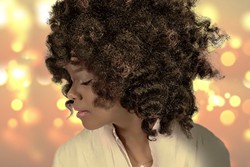 Allen Stone now has three albums of potent blue-eyed soul to his name. His elastic voice can move from a smooth falsetto croon to a kinetic upbeat groove. He’s clearly a student of Al Green, Bill Withers, and Curtis Mayfield.

The Voice contestant Jessica Childress will open with her soulful R&B with rock sounds. After her appearance on The Voice, she released an EP called Don’t Forget My Name. She’s also provided background vocals for Stone on his tours.

Rocky Votolato plays the Brew on Monday, Oct. 3 (8:30 p.m.; 18-and-older; $13 at ticketweb.com), with Chris Staples opening. Seattle-based Votolato has taken his singer-songwriter skills on the road for two decades now. His breakout album was Makers and its hit song “White Daisy Passing,” and his newest recording is the 2016 EP Sawdust and Shavings. Auteur Wim Wenders directed the video of the title track, an aching and haunting visual representation of the aching and haunting song.

Opening act Chris Staples is a dexterous guitarist with a soft, raspy voice that’s garnered a rabid fan base. This ought to be a terrific night of thoughtful singer-songwriter fare.

Party in the harbor! 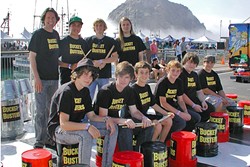 The nonprofit community event is held on the Embarcadero (between Harbor and Marina streets), and a free trolley will shuttle you down from town to avoid parking congestion. On the Dan Reddell Stage, see the Mud Skippers (11 a.m.), Zen Mountain Poets (12:30 p.m.) Deep Blue (2 p.m.), the Bobby Santa Cruz Band (3:30 p.m.), Sound Wave (5 p.m.), and headliner Garratt Wilkin & the Parrotheads, a Jimmy Buffet Tribute Band (6:30 p.m.).

Tours of the San Salvador docked on the South T Pier run from 10 a.m. to 6 p.m. Tickets and details are available at morrobaymaritime.org, and also available on site.

Learn more about the 35th annual fest at mbhf.com. 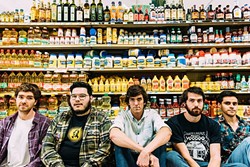 Grassroots college-centric music festival The Shabang is ready for its close up, Mr. DeMille. Its seventh installment happens this Saturday, Oct. 1, at Laguna Lake Park (3 to 9 p.m.; all ages; $5 general admission; $12 shuttle pass from Campus Bottle; $27 all-in-one pass with shuttle ride, admission, and a T-shirt available at shabangslo.com/tickets).

“With more bands, art, food, and fun this time around, it’s expected to be the biggest local show this town has ever seen,” organizers claim. “What started as a few friends and a guitar on a mountain has become a celebration of life, music, and breathtaking scenery, all driven by a mission of supporting our local community.”

“The musicians featured at The Shabang are primarily Central Coast rock bands with influences being drawn from the psychic, surf, and punk rock genres,” organizers added. “At the end of the day, it’s all straight California rock ’n’ roll.” 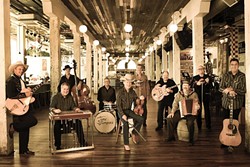 The Time Jumpers, which formed in Nashville in 1998, are “an assemblage of high-dollar studio musicians who wanted to spend some spare time jamming with their sonically gifted buddies in weekly public concerts at the Station Inn bluegrass club,” according to their bio. Maybe you’ve heard of a few of them.

Expect a sparkling celebration of Western swing and traditional country music on Monday, Oct. 3, at the Cal Poly’s Performing Arts Center (7:30 p.m.; all ages; student and general tickets from $32 to $75 at 756-4849).

Your favorite RoPhunk RaeHop act Fish Out of Water returns from their endless tour to their home base of SLO Town this week with a show at Tap It Brewery on Friday, Sept. 30 (5:30 to 8:30 p.m.; 21-and-older; free). Wrapping up their 16th national tour, the full-time touring band seems to circle the U.S. with forays to Australia, and though they’re not quite famous, they’ve garnered fans all over the world. Cousins Brandon and Kyle Moon created the group in Morro Bay in 2000 and they’ve never looked back, delivering their patented mix of funk, rock, reggae, and hip-hop.

Jazz Vespers return to the historic First Presbyterian Church of San Luis Obispo in their beautiful sanctuary on Sunday, Oct. 2 (4 p.m.; all ages; free). Hear music by acclaimed pianist Marshall Otwell, along with Ken Hustad on bass and Daryl Vandruff on drums. A reception follows. Donations are appreciated.

Also on Wednesday, Oct. 5, check out Good Times Ahead, whose 22-city tour will land them at The Graduate in SLO Town (9 p.m.; 18-and-older; $30 available at ticketfly.com), with opening act Chris Lake & Falcons.