The surf's up in Shell Beach

New Times Your movie Blue Green is screening in Shell Beach. Is it screening anywhere else?

Keller Indeed. There’s a saying in Maine that if you’re self-employed you have to have more than one string in your bow. I make films but I also do commercial film work, and print and design.

New Times So what is the impetus of Blue Green? What’s it about?

Keller I shot it, promoted it, and edited it with the help of other folks. This is my fourth surf film. There is a deeper thread to why these people were getting in the water. I wanted to explore that further, and Blue Green is the product of that exploration. 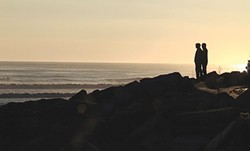 New Times What can audiences expect at La Perla when they view Blue Green?

Keller It’s 13 separate stories told by very different personalities, but they are tied together and the film takes you on a winding path through these stories. Each story leads into the next. Layne Beachley is important because she is a pro surfer and at that point was on her quest for her seventh world championship so she is very much embroiled in the surf scene and culture. We talked to her about how that fits into her connection with the ocean. We approached Keith Malloy the same way. He left competitive surfing and we wanted to know why—and how it impacted his connection with the ocean. Then we segue into the environmental portion of the film. Robert August—he’s an old school guy who’s surfed forever and grew up in an ocean-centric family and developed a business that is ocean-centric. We talked about why he pursued those paths in his life. We also talked to Sean Collins, who started Surfline (surfline.com).

New Times What connected the stories?

Keller We found that the interpretation of the connection with the ocean is a highly personal thing. Each one of these people has a take on it, but applies to all of us. The stories are familiar to us, especially if you are a surfer. It gets to the heart of what we are all about.

New Times Where did you film Blue Green?

Keller The movie has footage from Hawaii to Israel.

Keller Regardless of who you are and where you live, we are all connected to the ocean because it controls the weather—and we attempt to go beyond that in Blue Green.