The sweet life: Locally-crafted Mehlenbacher's Taffy is a taste of nostalgia

Mehlenbacher's Taffy—in its long, striped, and colorful shapes and original old-timey label—tastes like my childhood.

"She would just make a little bit and put it on wax paper and serve it at craft fairs," Himelson said. 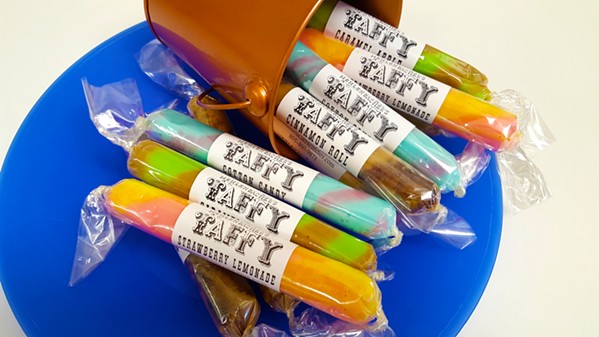 This homemade approach appealed to Himelson, who is a down-to-earth nature lover and hiker. Between raising her two sons and substitute teaching in SLO county, she decided to buy a taffy-making business.

Chatting with her on an early September day at Spearhead Coffee in Paso Robles, I was struck by the way her smile and kindness pulled me in. Himelson grew up near Oakland and found her niche as the "Taffy Lady" while working as a California distribution rep for Mehlenbacher, who was based out of upstate New York.

"It looked great and tasted awesome," she said, remembering how much she believed in the taffy she was selling.

Mehlenbacher had been hand-crafting and selling the taffy since the late 1980s and was ready to retire. She offered Himelson ownership of the business, and Himelson thought it could be fun. 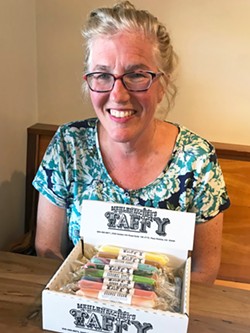 "She came out here for 10 days and taught me everything I know, and that's pretty much it," Himelson said.

The most popular this year is the root beer, she said, and last year, it was the strawberry lemonade. Her top flavor experts (all aged 10 and under) enthusiastically give the best of show award to watermelon.

In spring and summer, she might make pineapple, strawberry cheesecake, or limeade, and in the fall and winter, we will be able to find maple, sugar plum, wintergreen, cranberry, and eggnog.

Himelson sometimes gets creative with some exotic specialty flavors, too. Her molasses peppermint and lavender vanilla bean earned my lifelong respect and belong in every café.

"All the time, it's changing," she said, noting that she keeps the basic list the same because people love to always have access to their favorite flavors. "But I try to freshen things up, too."

We're used to seeing salt water taffy in those cute little wax wrappers, which Himelson informed me are called "kisses." (Of course they are.) But Himelson's taffy is longer and bar-like, more like a French kiss.

Mehlenbacher's taffy doesn't contain salt because Himelson keeps the Mehlenbacher tradition of letting the flavors stand on their own.

There are some interesting tales about how salt water became a part of taffy, such as one story about how when candy maker Enoch James refined the recipe by mechanizing the "pulling" process in the 1800s, he added salt because it made the taffy less sticky and easier to unwrap.

Himelson said she believes the story about an East Coast storm that caused ocean water to wash over the candy. Instead of tossing the taffy, those frugal candy makers rebranded their soggy sugar bites as salt water taffy.

The local taffy maker said her day-to-day routine involves making taffy out of her commercial kitchen in Paso, and of course, running the biz from ordering to distribution. Sometimes people mistakenly call her Ms. Mehlenbacher, and she said that's fine.

She answers to it anyway.

Making taffy is very physical. You have to pull it over and over to get the air bubbles out. I'm pretty sure you can count it as a workout—and Himelson said she does. After all of that physical labor, she hand wraps it, labels it, and puts it in the box for distribution. Just like that—handmade candy!

I'm not alone when I say there are many of us who find old-fashioned candy like Mehlenbacher's to be more than just a special treat.

I wish my kids knew how fun it was to blow all their birthday card money at a candy shop, but alas, we have some serious boundaries on sugar. But when I get them a special treat I don't want to cheap out and get them M&Ms or Skittles. Too easy. Too boring.

I first came upon Mehlenbacher's Taffy at the General Store in Paso. It was instant nostalgia. I could almost feel the breeze coming from the beach boardwalk and see the taffy machine pulling the pink and white swirls through the candy store window. I've been buying her taffy for my children's Christmas stockings ever since.

I'm not the only one who brakes for old-fashioned candy. Himelson's shop has been featured on the Rachael Ray Show, Martha Stewart Weddings magazine (they make adorable wedding favors, and she personalizes the labels for any occasion), and Town & Country magazine.

Pretty impressive, and her dentist is also a fan. He said her taffy doesn't stick to his teeth because it's so fresh.

"My dentist always gets a box at Christmas," Himelson giggled. Δ

New Times contributor Beth Giuffre is being pulled in every direction. Send wrappers and labels to bgiuffre@newtimesslo.com.