There is always a strong connection between Switzerland and California,” says artist and architect Tom di Santo.

Both places are similarly geographically diverse, he explains, and both seem to orient themselves around water: the Pacific in one case, the many lakes and rivers in the other. Di Santo, a Cal Poly associate professor in architecture, spends his summers teaching an off-campus program in Ticino, the Italian-speaking region of Switzerland. His own work, and likely that of his students, has been greatly influenced by the Swiss approach to design. 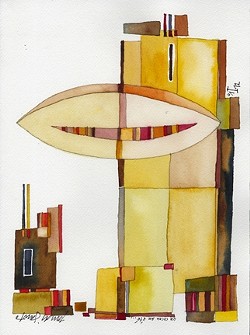 “Every country has its own feel,” he says. “The Swiss definitely have a language all their own, architecturally speaking, and the Italians have a different language. And even though they’re so close to each other, you can feel the difference. Crossing the border becomes a palpable experience.

“The sustainable aspect of architecture influences me,” di Santo continues.

He emphasized building structures that directly respond to their immediate environment—rather than quoting architectural styles that have no place in a given environment.

“Also, the attention to detail: They’re very meticulous in the way they craft things,” he says. “So I bring that into my studio as well. I’m very much interested in modernism as well, and the Swiss are top shelf when it comes to modernism.”

Sketching and watercolor painting are an integral part of di Santo’s architectural design process, and he imparts these techniques to his students, especially when traveling.

During his summer stays in Muggio, Switzerland, di Santo made the acquaintance of local Swiss Italian sculptor Simona Bellini, the artist with whom he shares the current Steynberg Gallery show “Stagioni,” or “Seasons.”

“I knew Simona through her work before I knew her, because I would go see exhibits of her work,” he says. “There was one exhibit in particular that was really beautiful, in a town called Gnosca, in a deconsecrated church, without a roof, all stone and with her large sculptures. And then I met her, and we hit it off pretty well right away. And then we invited her to teach. It’s a really interesting way to meet someone, through their work first.” 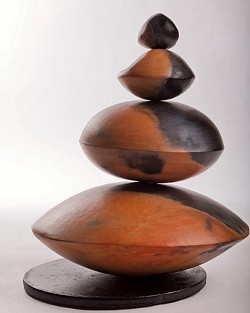 Often, Bellini works much larger, crafting enormous objects that tower over her. However, like di Santo, she must work in response to her environment, making things to fit the space, using only what’s available.

While Bellini and di Santo worked separately on their respective parts of the show, the forms and patterns they created are strikingly similar. Di Santo’s watercolors depict birds and butterflies at different times of the year, though he also enjoys wandering off into abstraction, creating square compartments reminiscent of aerial landscape views or, more fittingly for an architect, bizarre and impossible floor plans.

In their color gradation, too, the two artists mimic one another as well as the natural world, their designs maintaining an element of organic randomness. Colors streak and seep into one another, imitating patterns in rock or sand.

Handsome swing-like structures, crafted with wood and wire, display di Santo’s sketchbooks, in which his architectural designs and more freeform drawings can be seen side by side.

“I like to think of art and architecture as being inseparable,” di Santo explains of his approach. “In the Renaissance in Italy, you weren’t an architect or an artist, you were just an artist who did architecture. Michelangelo designed the cupola of St. Peter’s in Rome, he designed the stairs in the Laurentian library in Florence, but he also created sculpture and painted. Brunelleschi did the cupola in Florence, but he also did goldsmithing and sculpture.

Arts Editor Anna Weltner does a spot-on sand impression. Contact her at aweltner@newtimesslo.com.