After a bit of a slow wind-up to the concert season, Vina Robles Amphitheatre will really start hitting its stride this Saturday, Aug. 9, when the amazing Tedeschi Trucks Band performs (8 p.m.; all ages; $40.80 to $87; vinaroblesamphitheatre.com).

First of all, did you see Muscle Shoals, the great documentary about two Alabama recording studios that broke racial barriers and produced some great music from the likes of Percy Sledge, Aretha Franklin, Etta James, Clarence Carter, and Wilson Pickett? Do you like that kind of music? Well, hold onto your hats, because this is the show for you!

If you haven’t heard this act, get thee to Vevo and check out their many videos. They’re exceptional! So much soul! Great horn work, amazing vocals, and crazy deep grooves!

Revelator, their debut album produced at the couple’s Swamp Raga home studio, won a Grammy. Their follow-up, Everybody’s Talkin’, displayed the band’s incredible live musicianship. Their newest, Made Up Mind, was hailed by Rolling Stone as “equal parts Stax and Muscle Shoals without dilution of either.”

This is a great live act, and I can’t imagine a better place to see them than a warm summer night in Paso Robles, at this world-class amphitheatre! Special guest Jackie Greene will open.

The very next night, on Sunday, Aug. 10, two great contemporary reggae acts—Dirty Heads and Pepper—play with opening acts Aer and Katastro (6 p.m.; all ages; $39.80 to $50.05). These are some of the most popular reggae acts in the world!

On Wednesday, Aug. 13, the “Under the Sun Tour” comes to Vina Robles with Sugar Ray, Smash Mouth, Blues Traveler, and Uncle Kracker. If it was the mid-’90s, this show would be happening in a 40,000-seat stadium!

Two of our finest local songwriters—Joe Koenig and Doug Groshart—are both releasing albums this Saturday, Aug. 9 (8 p.m.; 21-and-older; $10 presale or $12 at the door), at SLO Brew.

Joe Koenig’s new album Bleed Like You Bleed opens strong with the barn-burning, Kid Rock-like ballad “Hellraiser,” on which Joe sings, “You’re a hellraiser. Who you gonna burn today? I just want to know so I can steer clear of your flame. There’s a wiggle in your hips; it’s just the way you walk. There’s a rasp to your voice; it’s just the way you talk. There’s something ’bout you baby that no man can resist. Well you seem to do me wrong almost every time. You’re on a mission to destroy the hearts and minds of every man around you—pick ’em up just to watch them fall.”

Joe calls his sound Texas Soul, and it falls nicely into the narrative, blues, and country rock genre. With an emotive, gritty, and well-worn voice, and some really effective but unobtrusive guitar work, this is a radio-ready collection of hooky songs from a songwriter who seems to get better every time I see him perform.

According to the Texas native’s bio, “If you organize Joe’s songs in the right order, you’d know the story of his life. Reflective lyrics and minimalist, stripped-down music define his soulful mastery. Driven by the intensity and turbulence of life events, Joe’s music shares a story guaranteed to make you feel.”

There’s no question there’s emotional power in Joe’s music, and there’s no doubt he’s finally slipped into the music he was meant to play. He started in the rock bands Torsion and then Snaphook, and they enjoyed a level of success before disbanding in 2004. But, it was really in 2006 that Joe embarked on his current musical journey, and he’s proven himself to be a master songwriter. Like John Mellencamp or Robert Earl Keen Jr., he paints sonic landscapes—unvarnished portraits of America.” 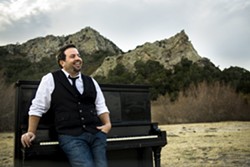 If Joe is the softer side of Kid Rock, Doug Groshart is a less flamboyant version of Elton John, or maybe Jackson Browne on piano instead of guitar.

On Hold the River Back, he writes five stirring ballads. I think this is the first solo EP for this member of the popular local rock act The JD Project, and each plaintive song weaves a tender tale spun out on Doug’s rich tenor and sparse orchestration.

It’s a great song, the sort of tale worthy of an early Billy Joel, with a melancholy air and a chorus that burrows into your head and refuses to leave.

“My main goal with this record is to pursue licensing, placement in movies/TV/commercials, as well as songwriting opportunities,” Doug explained. “I’m too old for touring.”

This is going to be a helluva good show!

See volunteer models from Achievement House and Hospice show off all the great clothes and accessories one can purchase at area thrift stores. The event will feature delicious food, live music, a silent auction, 50/50 drawing, and much more! In fact, they’re even holding a wedding!

“Our free clinics operate solely on donations, grants, and fundraising efforts,” according to organizers. “Thanks for being a part of this fashion show event to support the Noor Free Clinics!”

Want to have an awesome Friday, Aug. 8? You can start by seeing Damon Castillo in Concerts in the Plaza from 5:30 to 7:30 p.m., then go across the creek to Creeky Tiki and check out Makeover, who will start around “7ish,” according to band member Peter Ayers, who adds that his new band sounds like “Nirvana covering ’80s pop covers. We’re a three-piece without a keyboard, so we definitely make the songs unique to our style, but still maintain the hooks and vibes that you’re expecting.” Learn more at www.totallymakeover.com.

Avila Beach Resort hosts Portugal. The Man and Grouplove  this Wednesday, Aug. 13. Don’t hold the fact that Portugal. The Man hails from Sarah Palin’s hometown of Wasilla, Alaska, against them. This American rock formed in 2005 and has released eight studio albums and three EPs, and they’ve become one of the biggest names on the festival circuit. Likewise, LA-based indie band Grouplove, which formed in 2009, has developed into an exhilarating young act. “In Honda Civic Tour tradition, fans at the show will have an opportunity to view one-of-a-kind Honda Civic vehicles that have been customized and autographed by Portugal. The Man and Grouplove, through their collaboration,” according to organizers. “There will also be an opportunity to win these cars!” Tickets are available online.