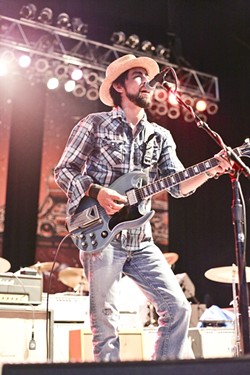 After a couple rounds at my favorite Paso dive bar, the Pine Street Saloon, and dinner at my favorite Paso Thai place, Basil, my wife Anna, New Times owners Bob and Cindy Rucker, and I head to Vina Robles for what I’ve guaranteed Bob and Cindy will be an incredible concert by opener, the Jackie Greene Band, and headliner, the Tedeschi Trucks Band.

It’s about 75 degrees, clear, and one day before the moon is full. Ahhhwoooo! I can feel the electricity in the hot Paso Robles air! After making our way to New Times’ box seats (I am not worthy! But I’ll take it!), we order a few drinks and settle in as Jackie Greene is getting the crowd warmed up. After moving from the guitar to keys, he and his band launch into some soul sounds, with Greene on the Hammond B-3, where he’s delivering the groove grease! Greene, who last year was recruited into the reactivated Black Crowes to play lead guitar, plays both electric and acoustic as well as harmonica, and we see it all happening before us. He closes his set with “Like a Ball and Chain,” and the crowd leaps to its feet. We’re well on our way to a magical music night!

About 20 minutes later, Vina Robles’ crack team of stagehands has transitioned the stage for the massive 11-piece Tedeschi Trucks Band, and as they make their way out, the murmuring crowd grows animated, and bursts into applause with the downbeat.

After spending the first couple of songs getting some photos at the lip of the stage before our passes expire at the third song, we head back and settle into our seats.

I watch as the nearly full moon creeps up past the amphitheatre’s proscenium, big as a dinner plate, and glowing milky white, just as the band rips into the title track of its new album Made Up Mind. Trucks’ chugging guitar pulls into the groove as Tedeschi’s soul-drenched voice launches into the first verse and chorus.

With a voice that is a cross between Janis Joplin and Bonnie Raitt, and some serious guitar chops of her own, Susan Tedeschi is a force of nature. 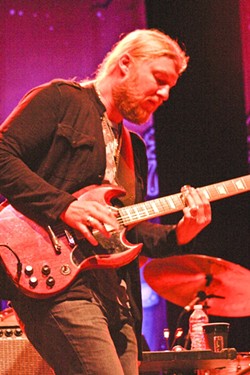 “She’s got a big voice for a little blonde gal,” Anna whispers to me.

Bob’s most amazed at the band’s double drummers, Tyler Greenwell and J.J. Johnson, who seem to move as one. It’s a huge sound, and watching two guys in perfect sync is pretty amazing. The whole band is just punchy and tight, and it’s important to mention that this is a band, all 11 of them, not just a backing band for the two namesakes. Keyboardist and flutist Kofi Burbridge is given plenty of chances to shine, as are background vocalists Mike Mattison and Mark Rivers, to whom Tedeschi frequently yields lead vocalist duties. Horn section Kebbi Williams, Maurice Brown, and Saunder Sermons phatten up the band’s already full sound, and bassist Tim Lefebvre lays down the undeniably infectious rhythm of this diverse act.

I look out to the crowd, and see a sea of cell phone cameras bobbing in the darkness. After each song, floods light up the packed house as they cheer wildly. 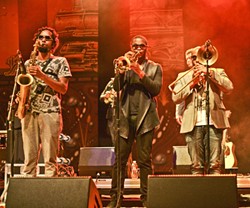 Partway through their set, the band tones things down. Trucks pulls out an acoustic guitar, most of the band moves to the back of the stage, and things get very intimate. This slowed-down, soulful interlude of three songs is one of my favorite moments of the concert.

Once the momentum gets going again, Tedeschi has to take to the mic between songs to remind the crowd to keep the aisles clear: “These guys are just doing their job,” she says of security. “You can dance as much as you want, just not in the aisles. I’m a mom and the only woman in the band, so I can say what I want!”

Once the music ends, the crowd bellows for more, and after a short few minutes, the band returns to stage, this time with Jackie Greene! They play for another 20 minutes or so, but all good things must come to an end, and soon the crowd dissipates into the night, buzzing with the energy of what we just witnessed.