I love Thanksgiving, mainly because my mom’s a smoking cook and it’s nice to see the family. But as much as I love it, the Friday after Thanksgiving is always the best day of the year. That’s when, for the last dozen years or so, I’ve hosted “The Thanksgiving After Thanksgiving Thanksgiving,” in which I invite my friends to come over and have yet another gut-busting meal.

While others are outside standing in line at Best Buy and vying for parking places in crowded mall lots, I’m busting out the deep fryer and rotisserie, the chafing dishes and julienne slicer. 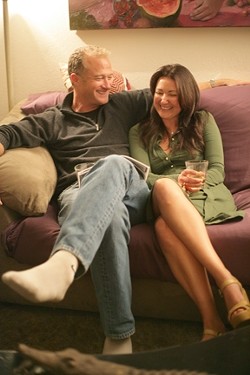 This year, with the help of my paramour Anna Robertshaw and my buddy Keith Bond, we deep fried a turkey, roasted another turkey, barbecued a ham and two tri-tips, rotisseried two pork loins, cooked mashed potatoes, made gravy, baked sweet potatoes and carrots, deep fried yam wedges, and then opened the doors to our friends who brought all manner of other side dishes and desserts. It was a feast!

There was no shortage of booze, either. In fact, I believe I counted four gift packs of Jameson replete with two glasses in each, half a dozen bottles of wine, Crown Royal, a bottle of tequila, and a pitcher of some concoction that included champagne and pomegranate seeds. And beer. Lots and lots of beer. The fact that we had a crowd of about 35 and there was still a case and a half of beer left the next day is all you need to know about the inexhaustible supply.

Right about now you’re probably thinking, “Thanks for the invite, dick! Why should I care about your stupid party?”

Believe me, I don’t expect you to, but when you’ve got three-quarters of a page to fill even though it’s Thanksgiving weekend and there’s nothing but family stuff going on, you work with what you’ve got. Plus, since contributor Nick Powell is about to take over Art Bash! for the rest of the year while I go on a much-needed vacation, I didn’t want to set the bar too high.