The Tipsy Gypsies release their new album of retro music

It’s Friday, July 19, and once again I appear to be underdressed! Who knew the Tipsy Gypsies’ album release party at The Z Club would lure in so many natty clotheshorses? And what happened to The Z? It’s been transformed into an underground jazz club/ speakeasy circa 1930s. It’s got all the trappings minus the bathtub gin and cigarette smoke!

One of the first people I spot is the Cuban-American painter Linda Castellon, who’s sporting a slinky black dress and a big red flower in her hair. She rushes over and gives me the traditional multi-cheek kisses, then sees my wife Anna and repeats. Sheesh! Fresh much!

And there’s the Blade Runner hair whisperer/massage jockey Jon Haddeland. Looking good, Jon! Then I see multi-instrumentalist Dave Seidenzahl, who discusses at length the quality of his drink, a supposed White Russian. Apparently there were some odd replacements for the Kahlúa and cream. Well, at least it has vodka, right?

Chief songwriter and guitarist Forrestt Williams, whose parents obviously wanted to make him work extra hard to spell his name (my mom named me one-“N” Glen because she says “I knew you’d be lazy”), delivers plenty of sparkling guitar work in the spirit of Django Reinhardt (who, let’s remember, had two paralyzed fingers, so big freakin’ deal, Forrestt!).

Allan Dick is a flat-out amazing fiddler, which is why he’s got no shortage of gigs. He’s also in The Swingin’ Doors and Cuesta Ridge, among others. And drummer Isaac Laing and upright bassist Brian Lanzone (son of Frank of KCBX fame) keep the rhythms tight and jumping. These guys are a lot of fun, but good luck getting near the stage! 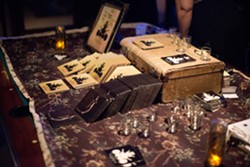 After the show, I talk to Forrestt, who explains that The Z Club was the perfect spot because they were allowed to decorate the space as they wanted as well as keep 100 percent of the door. They had about 120 attendees.

“Which was good, because it helped offset the cost of the CDs,” he says.

“I thought you raised the money on Kickstarter,” I counter.

“About two grand. We mixed the CD at my friend’s studio in Ojai—Brotheryn Studios—and they had just won a Grammy for their work with Mumford & Sons, and the studio rates went up.”

“Geesh, even for the bro deal?”

“Yeah, it was a little unexpected.”

“What are you going to do?”

“Get some more gigs and sell more CDs.”