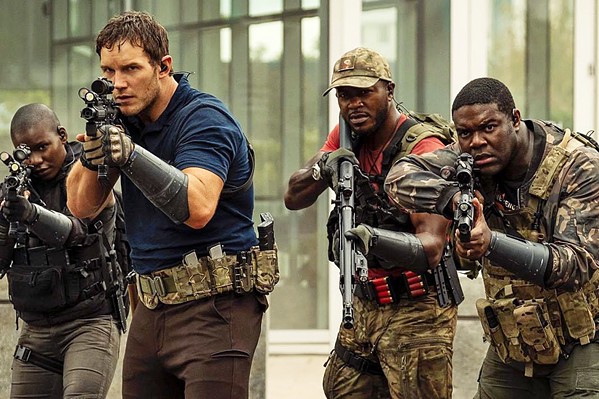 Chris McKay (The Lego Batman Movie) directs this sci-fi adventure about a future war humanity is losing against aliens. When time travelers arrive from 2051, they recruit soldiers and civilians in the present to travel 30 years into the future to help fight the war before it's too late. Most of the draftees never return.

High school teacher Dan Forester (Chris Pratt) is called to duty, reluctant to go but determined to assure there's a future world for his daughter Muri (Ryan Kiera Armstrong). Once there, he teams up with the leader of the future army, a brilliant scientist (Yvonne Strahovski) working to destroy the enemy.

It's action-packed, well filmed, and considering it deals in time travel, only mostly ridiculous. Between Forester and his daughter Muri, and Forester and his estranged father James (J.K. Simmons), the story works hard to inject some emotional heft, but the star of the show is Pratt, who's delivering his quippy one-liners with dry humor. It's not great, but it's free with your Amazon Prime subscription. (140 min.) Δ