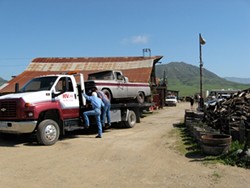 “He’s playing a shell game, moving cars around,” Trinidade fumed as his team members searched the 72-acre ranch for certain vehicles named on the list.

They didn’t find many of them. In the end, Trinidade said, DeVaul properly stored between six and eight vehicles, got rid of an additional eight, and the county had six towed away.

DeVaul’s supporters countered that, while they knew the county would be coming for 26 vehicles, some of the vehicles the code officials were taking were working agricultural vehicles instead of the junkers they ought to have been seeking.

Indeed, one of the first vehicles on a tow bed was a Chevrolet pickup with an exterior tank bolted on.

Asked why they didn’t haul off more vehicles, Trinidade said: “It’s hard to prove a negative. We looked all over the property for those cars, and they were gone. He claimed, between cursing at us, that he’d gotten rid of them.”

It’s not over yet. Trinidade said code officers took note of an additional 42 vehicles remaining on the property. He said the fate of those vehicles may be determined at a May Board of Supervisors meeting.

Asked why he needed the bullet-proof vest, Trinidade said it’s routine to wear a vest to serve a warrant, but that he did instruct deputies to temporarily confiscate weapons on the ranch during the raid.

Becky Jorgeson, executive director of the Sunny Acres treatment center that is based at the ranch, watched on as the code officials directed truckers to load up vehicles that DeVaul maintained were needed on the ranch.

“If this is the county’s way of helping us,” she said, “then heaven help us all.”