The trash baron of Templeton

The first thing you need to know about Mid State Solid Waste & Recycling is why its magnanimous, Joe-every-guy owner hasn’t been welcomed into the San Luis Obispo Garbagemens’ Association.

Scratch that. The first thing you need to know is what the Garbagemens’ Association is. 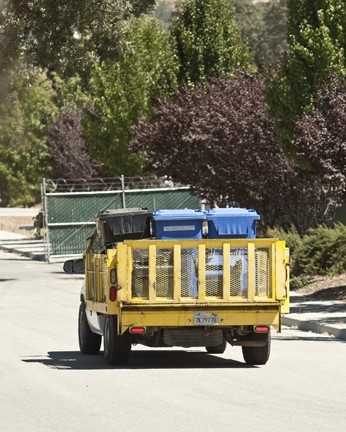 Comprised of seven of the major solid waste haulers and landfill operators in San Luis Obispo County, the Garbagemens’ Association is a veritable roundtable of Central Coast trash titans. While the inner workings are anything but illicit, this group is still largely obscured from public eyes—you’re not going to turn up agenda items through a simple Google search, for example. However, the Garbagemens’ Association is known for its regular shindigs and balls, drawing the who’s-who of local politicians, lawyers, and businesspeople to black tie affairs.

In short, if you’re a member of the local garbage industry, you want in. But entry doesn’t come easy. Much like your neighborhood Elks or Moose lodge, a seat among this illustrious group requires sponsorship: two sponsors, to be exact. And while lodges might have dozens of members and potential sponsors, the brethren of garbage men is much more discriminating.

Yet it seems anyone who’s wanted to join has been able to do so—except for Brad Goodrow.

Not long after Goodrow, the son of southern Californian trash magnates, got to town, he nearly immediately solidified his thus-far lasting absence from the Garbagemens’ Association. Goodrow is now most prominently known as the owner of Mid State Solid Waste & Recycling, a trash-hauling, recycling, and composting operation headquartered in Paso Robles, though Goodrow lives on a ranch in Creston. The company does most of its business in Templeton through a franchise agreement with the local community services district.

The first lesson about dealing garbage is to know your franchise area. While other parts of the state and country differ on turf rules—it’s not uncommon for garbage collectors in Southern California to have an all-out, free-for-all fight to score regular trash pickups—SLO County operates on a very stringent set of boundaries. If you live in San Luis Obispo proper, your containers get picked up by Mission Country Disposal, for instance. Paso Robles is the domain of Paso Robles Waste. And in Arroyo Grande, trash hauling is handled by South County Sanitary Services.

The first rule of garbage collection is that you don’t put your bin in another company’s franchise area. Though most of the local garbage officials who spoke for this story would only speak on background or on condition of anonymity, they told New Times that Goodrow isn’t invited to the Garbagemens’ Association because his containers had a nasty habit of ending up where they weren’t supposed to be.

Garbage haulers, in exchange for exclusive rights to charge for pickup, also have to pay a variety of fees to a variety of agencies in their franchise area. Those fees typically get absorbed into their rates, so when they lose a customer because another company has snuck in a foreign bin, they absorb all of the costs with none of the payback.

In fact, several local haulers complained to the county when their drivers discovered wayward Mid State bins. Mary Whittlesey, the county’s solid waste coordinator, said she received a few complaints years ago, but they were handled privately and case-by-case. She doesn’t think much of the situation anymore. However, some local garbage haulers still sound annoyed. One person told New Times about having to make several complaints to get Mid State containers out of their area. Another provider said, simply, “You’re not supposed to put bins in the other guy’s turf.”

Beyond some pissed-off garbage men who don’t want Goodrow to join their club, he’s had bigger problems facing his company and, specifically, his trucks. He also, as it turns out, has the most smoking deal of any local garbage hauler who moves trash in this county.

Martin Wetherholt said he was fired from Mid State Solid Waste after refusing to drive the company’s trucks. As a longtime garbage man in the area who worked for another North County company before Mid State, Wetherholt said he’s seen top-of-the line operations, but he felt Mid State’s trucks were on the other end: old and worn. He said he’s seen pieces fall off, once after he hit a pothole, but that frequent paint jobs make the trucks look nice.

“Basically, the only thing that’s holding those things together is paint,” he said.

Wetherholt said he was fired from the company after he refused to drive a truck with what he called “broken leaf springs.” And while he said he tried to appeal his case and win back his job, he had no luck.

Goodrow didn’t respond to calls to his home or business or messages to his personal Facebook page seeking comment and confirmation.

Indeed, other drivers have related similar experiences to Wetherholt’s. One driver, who would only speak on condition of anonymity out of fear of losing his job, said he’s seen trucks in a sorry state of repair, leaking oil, transmission fluid, and hydraulic fluid.

And while county and state inspectors have often missed such problems, the anonymous employee said he was surprised one day to find a CHP officer jotting down the VIN and license numbers off the truck he was driving.

In fact, according to a recent CHP inspection report, of four trucks that were inspected, one was placed out of service for alleged vehicle code violations, and the other three were cited for issues ranging from bad brakes to leaking oil and grease. According to the CHP inspection report, dated June 26, Mid State was given an “unsatisfactory” rating and allowed 120 days to clean up its operations before the next inspection—or face possible misdemeanor charges and the loss of its DMV permit.

However, Mid State has at least five other trucks in its fleet. When the CHP performs inspections, according to inspector Bob Black, it looks at a sample of vehicles during inspections—for a fleet of 10 trucks, for example, they might look at four.

On the other hand, SLO County Environmental Health inspects all of the vehicles—at least, that’s how things are supposed to work.

New Times was able to obtain both the CHP’s recent inspection report as well as the county’s 2011 inspection report. According to Brad Prior of County Environmental Health, county inspectors have a complete inventory of all trucks, minus new purchases, which they record during annual inspections. The county’s inspections are a little more vanilla, with inspectors checking only that the reverse sirens (that tell-tale beep) are in order, that the trucks have equipment to clean up in the event of a spill, and that all the trucks are outfitted with a green sticker that signifies they passed inspection.

But the CHP inspection report documents two trucks that weren’t recorded by county officials, who should have the complete list. Specifically, trucks 10 and 41 weren’t part of the county’s most recent inspection. All four trucks were monsters, with listed gross vehicle weight ratings of 58,000 pounds apiece.

Truck 10 is a 1989 Volvo, which CHP inspectors said they had no record of, and it was subsequently placed out of service.

Prior didn’t return calls or e-mails to provide an explanation for this discrepancy.

While Mid State holds a few contracts throughout the area for its hauling, composting, and recycling operations, its primary contract is with the Templeton Community Services District.

In mid-2006, Dale Gomer of Paso Robles Waste was one of a few people trying to land the franchise area in Templeton. Gomer said he was invited to offer a bid, at first, but that he quickly saw that the CSD had its heart set on Mid State.

The contract went out to bid because Mid State was proposing to raise its rates, Gomer said, but he pulled himself out of the process when it became clear he couldn’t compete as things moved forward and Goodrow said he could shrink his bid.

“It was one of those situations—whatever,” Gomer told New Times.

Soon thereafter, Gomer said Mid State hiked its rates, which pushed the contract amount above what he had bid.

More recently, Mid State was awarded a new contract with Templeton that not only financially trounced the company’s existing agreement to pick up trash within the CSD, but it blew away any other contract in the county.

The previous agreement was set to expire in April 2013, according to a CSD staff report. CSD staffers began negotiations earlier this year on a new contract after being approached by Mid State. According to the staff report, the company “explained that the biggest benefit of an extended year [sic] contract is that it assists the hauler in receiving the needed funding and loan guarantees thus keeping all of their facilities with up-to-date and state-of-the-art equipment.” At the same time, Mid State proposed a rate reduction of about 6 percent.

The CSD gathered a subcommittee comprised of its General Manager Mike Hodge, Board of Directors President John Gannon, and board member Greg O’Sullivan. After several meetings, the subcommittee had finalized a proposed contract to take to the entire board for approval.

And on July 24, the board unanimously and happily approved a new contract. Nearly every director praised Goodrow for his excellent service and the quality of Mid State’s operations. But the new contract took at least one director, O’Sullivan, by surprise. Though he sat on the committee that drew up the new terms, O’Sullivan said he was under the impression the contract would be a fixed 10-year contract, which is more in line with similar agreements with other companies in the county.

Here’s the way the new contract works: In the industry, it’s often called a 10-year evergreen, and while it’s not uncommon elsewhere, local garbage haulers told New Times no one else in this county has ever had such a contract—most operate on 15-year agreements and the 10-year evergreen is like winning the garbage lottery.

Under Mid State’s contract, it has a fixed 10-year agreement to pick up the trash within the Templeton CSD, which is renewed automatically every year unless the CSD decides to cancel.

Herein lies the kicker. If and when the CSD decides to cancel, the contract won’t end for another 10 years. In effect, Mid State can have its contract canceled, but enjoy another 10 years of guaranteed business. Industry experts told New Times this type of contract is also a great way for a company to cash out and sell its operations to another agency.

At the July 24 meeting, Templeton resident and banker Gwen Pelfrey said Goodrow would need such a contract to get the loans he needs to make the repairs necessary to his trucks and other equipment. In effect, the CSD gave Goodrow the bailout he needed to fix up the trucks, some more than two decades old.

However, O’Sullivan later told New Times he was never given information about the recent CHP inspections nor the conditions of the trucks. He said he voted for the contract, though he was “uncomfortable” about the possibility of a nearly limitless agreement. Asked about the CHP reports, O’Sullivan said “staff should have presented that information.”

Unfortunately, O’Sullivan remains one of the only CSD members who’s talking. Neither Hodge nor Gannon returned e-mail requests for comment.

In fact, as of this printing, the district has thus far failed to provide any financial information it holds on Mid State. According to the company’s contract, it’s required to submit annual financial statements as well as disclosures of other financial transactions with outside parties.

After a new public records request was submitted, the CSD waited 10 days to respond. According to that response, CSD officials granted themselves an additional 14 days to decide whether they would disclose the financial information.

Contributing writer Colin Rigley can be reached at crigley@newtimesslo.com.