Good morning and welcome to Sociology 101, an introduction to the study of society and social behavior among homo sapiens.

Humans are social animals. We naturally create and maintain social networks. Some of us have very tight and often exclusive social circles while others have large overlapping networks, moving between and belonging to a number of clans. Leading scholars postulate that our brains are hardwired for tribalism, and that human evolution has developed among small groups rather than mass societies. 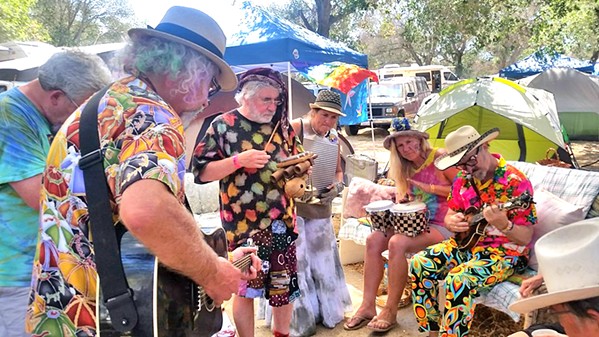 This phenomenon is easily observed at the Live Oak Music Festival, a gathering of various tribes that occurs annually at Camp Live Oak, located north of Santa Barbara, off Highway 154, about 40 minutes south of the Santa Maria Valley. Every Father's Day weekend for the last 29 years, these tribes have convened. On Friday, June 15, through Sunday, June 17, we can observe the 30th time these social groups have gathered to engage in communal meals, tribal dancing, music making, exchanging of goods and services, conversation, shenanigans, childrearing, beer drinking (often in that order), bicycle riding, feats of strength, and lukewarm-water showering.

There are lots of big tribes, like Camp Crud, a jam camp with upwards of 20 players hosted by artist and longtime figure model Doña Deack, which started in 1995. Musicians frequently come by to jam. Her main lament is a recent Live Oak rule of quiet time after midnight. She used to love jamming through the twilight hours. Others prefer the new sleep time.

There's also Camp Happy, or what some people call Camp Smiley Face, a bicycle lovers' camp run by Dan Kallal, who's part of SLO's Tall Bike Posse. His camp has about 60 to 70 adults and kids. A lot of his tribe met at The Establishment, the communal living house kitty-corner to Gus's Grocery in SLO. "We often have happy face street signs with eyes pointing the direction to Happy Camp," Kallal said. "Live Oak is like a family reunion. I also like how safe it feels to let our kids roam free and just be kids." 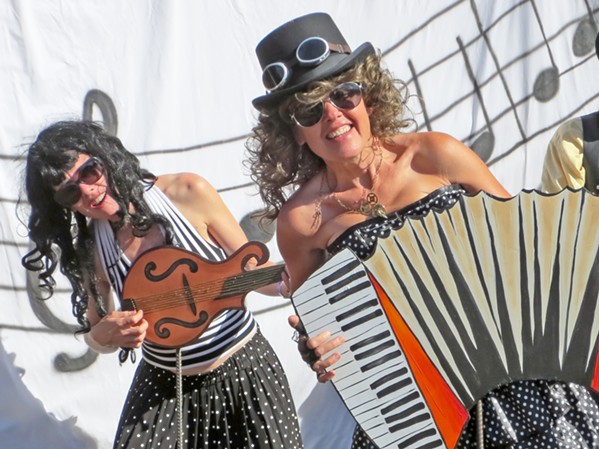 "The impetus was to encourage performers to fully experience all Live Oak has to offer and connect with each other," Todd said. "The vibe is community. That's what I love—the community it inspires."

Let's take a closer look at a trio of Live Oak's biggest tribes.

One long-running group camp began in 1994 and acquired the name Camp Ba'ar Nekkid in 1996. Original group member Kelly McCleary explained, "Way back in 1996, Naked to the World played at Live Oak, and the band members were friends of ours and camped with us. My boyfriend at the time had a nickname for me, 'bear,' but he'd pronounce it 'ba'ar'—and that's how we became Camp Ba'ar Nekkid!"

The camp is a mix of Live Oak volunteers and their friends, and it's had a "no kids" rule from the beginning. It's not that children aren't allowed to wander through camp, but those who camp at Ba'ar Nekkid are not allowed to bring their underage children.

"With a camp name of 'Nekkid,' we didn't think it would be appropriate to expose kids to our escapades," McCleary said. "We were a lot younger back then."

Last year, several of the female Ba'ar Nekkid tribe members were photographed with a piñata-like effigy of Donald Trump, who had his tiny papier-mâché hands touching their private areas. Ba'ar Nekkid is also known for its collection of nude Barbie and Ken dolls arranged in compromising positions. The camp is clearly not known for its maturity, despite its "no kids" rule. 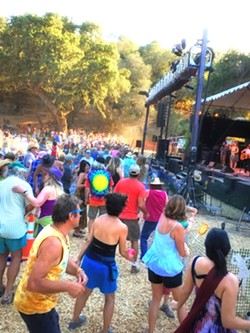 George Griffin has been a member of Camp Ba'ar Nekkid for "20 years, maybe a little longer," he said, noting that when he first attended Live Oak, he camped with another tribe, but "mutual friends" invited him over to Ba'ar Nekkid.

The camp's ongoing joke is that to be invited to become a tribe member, you have to sleep your way in with another member, which might also be why it's a kid-free camp.

"Visiting the camp was really fun, and I met Liz there," Griffin recalled, referencing his now-wife, the artist and clothing designer Liz Rhodes Cordoba. Hmm, maybe that "sleeping your way in" isn't an ongoing "joke" after all.

In any case, while Griffin believes Live Oak is "all about the music," he also finds that "there's a whole bunch of community that happens as well."

Over the years, the camp has hosted a communal wine tasting—often on Saturday afternoon—where camp members share their best bottles of wine with one another, as well as various snacks. On Sunday, they engage in a beer tasting.

"We've had many themes over the years, often riffing off the backstage theme," McCleary said, making reference to the festival's creative green room accommodations for the performers. "It's a group effort to decorate camp, bring the couch, carpets, tables, chairs, kitchen, and chandelier. Oh, and costumes! If there's a zydeco band on the main stage, we've been known to second line through the audience area. One year we even had stilt walkers go through the audience area, myself included."

Yes, many of these camps have elaborate themes, group activities, and outdoor living rooms. Ba'ar Nekkid also has a chuck wagon that one of the members made, complete with water cistern and a sink for dishwashing. The 25 to 35 campers share the communal area.

"With our living room in camp, people often wander through and end up staying awhile," McCleary said. "We've also had some great musician jams in camp over the years. A couple of years ago, [Live Oak emcee] Joe Craven came by with these amazing crazy cat glasses. We had a fantastic jam!"

McCleary finds Live Oak's most impressive characteristic the "community we create each year from a patch of dirt! The creativity, the music, and all the smiles." For Griffin, "I think Live Oak hits that really wonderful sweet spot in festivals where it's not too big you get lost in it and not too small. The audience area is never overcrowded, the music is fabulous—it's that Goldilocks fit, just right, and it's a wonderful opportunity to have fun and support KCBX."

Another long-running camp with a mix of volunteers and their friends is a camp with no name.

"We've never really come up with a name for our camp," Marianne Orme said. "Perhaps it's too many chiefs and not enough cooks! When referring to this particular group, we say 'our tribe.' It's a pretty close-knit group. We have the Backstage Ambiance crew and that's a group of, let's say, very strong women, and then we have many musicians from various local bands. So a name? Nah ... too busy playing music and having fun!"

Orme is part of the volunteer group that designs and executes the elaborate green rooms for the main stage performers, and she loves that "music is happening all day, and close to all night. The best lullabies are your friends right outside your tent singing the songs they wrote.

"We always have a costume happy hour party on Saturday with the same theme as backstage. This year—2018—the tame version of our theme is 'the shagadelic '60s, baby,' so expect a lot of pop colors and era costumes."

Orme noted that a few years ago, some referred to her camp as "Sully's camp" because a tribe member set up a bar. There was a Sully's cocktail lounge in San Luis Obispo that burned down in 1975 in the Obispo Theater fire. The bar became very popular—"too popular and those headstrong women put a stop to it when lap dancing and vomit on tents became just a little too frequent," Orme recalled. "So, we are a bit more tame these years. Perhaps getting older has something to do with it, who knows. But our tribe is incredibly supportive of each other, and we still gather every year in approximately the same spot at Live Oak camp as well as at other times of the year to celebrate birthdays, weddings, anniversaries, and the inevitable funeral. You can count on the tribe to have your back whenever needed. Each and every one of them will go above and beyond to support each other. There's a lot of love there."

Before you come away with the misconception that Live Oak Music Festival is a debauched, adults-only affair, take heed: This is first and foremost a family festival, and the bulk of the camps and campers are kid friendly. In fact, pretty much any Live Oakie with kids will tell you how safe the festival is for the young ones. It takes a village, as they say. There's even a whole area dedicated to kids crafts and activities, a kid talent show, and roving gangs of kids running all over the campground unsupervised because it's so darn safe. One big family camp is celebrating its 16th year, and according to its organizer, Chris Bahr, it's gone through several iterations.

"An early name was 'Bahr's End' since a couple camps next to us have 'bar' in their names, 'Ba'ar Nekkid' and 'Bar Stool,' and we were the last one in line," Bahr said. "Someone camping next to us called us 'ZanzaBahr.' He actually came back the next year with a really cool wood sign [that read] 'Zanzabarh.' I didn't have the heart to tell him he didn't spell my last name correctly. Every year we come up with a new name.

"Our first year was the year we first moved to SLO," Bahr continued. "I saw the advertisement in the New Times. My wife and I both agreed this looked fun and something we could take our 18-month-old son to. One of our neighbors was going and she invited us to camp with her, so we went. We had such a fun time [that] I volunteered the next year and have been volunteering every year since. Now I take the entire week off before to help set up and build the event."

For Camp ZanzaBahr (or whatever they decide to name it this year), the camp theme is simple: "Have a family-friendly time. The vibe is positive, friendly, musical happiness! Leave the issues of the world behind for one weekend!"

Bahr's camp has had as few as 35 campers and as many as 70, and it's grown because of connections made at Live Oak.

"Over half we now camp with had camped next to us one year," Bahr noted. "We would hit it off so well we'd exchange numbers and emails. I have a master email list with everyone that's camped with us. Around March or April, I send out an 'All Call' email asking who's coming this year. Once we get the responses, we then coordinate our camp meals and supplies."

A campmate named Stacy was made camp quartermaster. A caterer by trade, Stacy began collecting camp kitchen items to serve up to 70 people, and "35 to 70 people don't have to pack and bring this [stuff]," Bahr said. "We also coordinate bringing the camp stoves, tables, etc., so we have what we need." 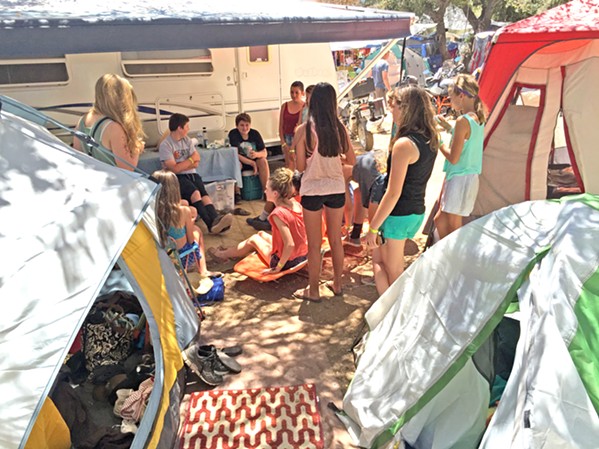 Bahr loves it when people drop by. Who knows? Maybe next year they'll be part of the Bahr family camp: "That's one of the best parts. Having old and new friends wander into camp and sit down. Hopefully they bring a musical instrument with them and sing a few songs. Camping out in an incredibly beautiful part of California with wonderful friends and family. Falling asleep to sounds of 2,000 people camping out, laughing, playing music, and reveling. Waking up to 2,000 people sleeping and making coffee for 40 people in our camp. Seeing the kids crawl out of their tents with sleepy eyes, matted hair, and unwashed faces from the day before jump on their bikes and head off to find their best new Live Oak friend."