SLO County’s major daily newspaper quietly laid off at least three newsroom employees on May 2 amid steadily declining revenues from its parent company.

Tribune General Manager and Vice President of Human Resources Devon Goetz confirmed that the paper eliminated a “small number of positions” from the newsroom as part of “expense reductions.” Those included two part-time positions, one of which was based out of the East Coast, and two full-time positions.

“We’ve offered one of those individuals a part-time position and hope they will stay on in that capacity,” Goetz said. “The four employees have been provided with a severance package and outplacement services.” 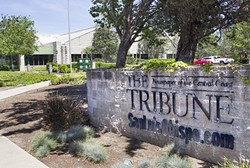 The layoffs at The Tribune come as its parent company, McClatchy, faces declining revenues and embraces a new leader in CEO Craig Forman, appointed in January. McClatchy reported a 7.5 percent reduction in revenue in 2016 compared to 2015, according to the company’s annual report to shareholders. It also saw a 7.8 percent decline in revenue in 2015. To recover costs, The Tribune outsourced its printing to Fresno in 2015. McClatchy’s also expressed an intention to sell The Tribune building on South Higuera Street.

Despite the shake-up, McClatchy’s 2016 annual report strikes an optimistic tone about its shift toward a greater online presence.

“McClatchy begins 2017 with a sharpened focus on accelerating our digital transformation,” the report reads. “We are clear-eyed about the challenges facing the print newspaper economic model. We will remain vigilant on cost control and expense reduction.”

“Those successes helped us weather industry-wide declines in print advertising, and they prepare us for the year ahead,” the report stated.

In addition, The Tribune has upped the price of its subscription packages in recent years—now advertised at $779.48 annually for daily deliveries and online access.

The company also appears to be asking for different prices from different customers, according to two sets of customer bills shared with New Times.

A discussion between more of his neighbors revealed several different prices for 52-week subscriptions. In his correspondences with the company, he was told that its marketing division identifies price points for each customer.

“I’m feeling scammed after 20 years as a loyal subscriber,” Johnson said, noting that he canceled his subscription.

According to billing statements, the drastic price increase for both customers between 2015 and 2016 is likely due to The Tribune changing its policy to include “special editions” as part of the subscription package—which it didn’t do prior. As to why there’s a price difference between neighbors, The Tribune’s general manager declined to answer in detail.

“Our rates are published in the newspaper each day, and we offer a variety of special programs and products at different times over the years,” Goetz said. “We decline to comment on any specifics as this is proprietary business information.”