The Undoing is an engrossing psychological thriller

Based on Jean Hanff Korelitz's 2014 novel You Should Have Known, this tale of betrayal written for television by David E. Kelley and directed by Susanne Bier follows successful New York therapist Grace Fraser (Nicole Kidman), whose life begins to unravel after her husband, pediatric oncologist Jonathan Fraser (Hugh Grant), is accused of murdering Elena Alves (Matilda De Angelis), the mother of one of Jonathan's young cancer patients, Miguel (Edan Alexander), who happens to be a classmate of Jonathan and Grace's son, Henry (Noah Jupe). With Detective Joe Mendoza (Edgar Ramírez) in hot pursuit, and the other potential suspect—Elena's mercurial husband, Fernando (Ismael Cruz Cordova)—with an alibi, Jonathan's only hope is his astute attorney, Hailey Fitzgerald (Noma Dumezweni), hired under the largess of Grace's wealthy father, Franklin Reinhardt (Donald Sutherland), who doesn't think well of Jonathan. (six 50- to 67-min. episodes) 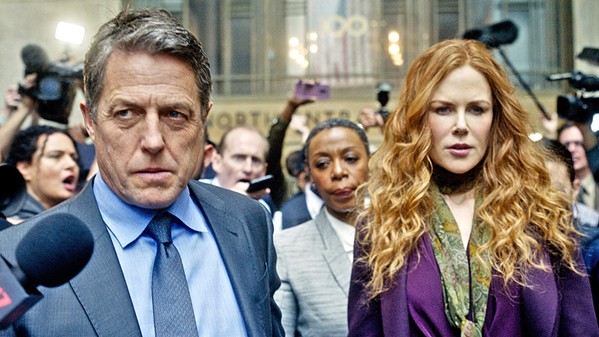 Glen The synopsis above makes this story sound very convoluted, but it's so well written, directed, and acted that the only thing that isn't clear is whodunit! Jonathan seems the obvious choice. After all, his semen was found in the victim. But as this carefully and thoughtfully told story unfolds, you'll find yourself wildly speculating throughout. Was it Elena's husband? Was it Grace? What about Grace's son, Henry? Or did Grace's father, Franklin, have something to do with it? At one time or another through these six episodes, all were on my list of suspects. It's a delicious mystery, with plenty of twists and turns, double-backs, and red herrings to send you into mental knots as you try to work it out. It's also about the fallout of such a horrible event on the families of those involved. We so want to believe Jonathan, a man who heals children of cancer, and Grace's sense of betrayal from his affair with Elena is palpable. Likewise, Henry is torn by the thought of his father being a murderer and his parents' marriage dissolving. And Franklin? He's cutthroat in the way only the 1 percent can be—knowing your money can buy your way out of anything. It might not be quite as good as Big Little Lies, but The Undoing will keep you riveted nonetheless.

Anna This series does a fantastic job of keeping its audience from knowing which way is up. Jonathan is charming and clever, a seemingly good husband and father until the murder brings his affair to light. He shows up at Franklin's beach house where Grace and Henry have retreated in hopes of avoiding the media's prying eyes, and when he does, Grace is scared out of her mind, and you can feel the fear through her performance. Kidman is just amazing here—her character is both methodical and emotional, torn between what she wants the truth to be and what it actually is. Jonathan's dogged insistence at his innocence has her second-guessing the narrative she is being told by investigators, and her fierce protection of Henry has her like a cornered mother lion. The costuming of Kidman is particularly wonderful, an upper-crust portrait of a woman coming apart at the seams in some really, really nice coats. Franklin's apartment overlooks Central Park with ceilings so high you have to squint to see them; the sheer opulence is breathtaking. It's just a beautifully rich world the creators have given us a peephole into. I didn't know what to think up until the very end, and that's pretty impressive.

Glen The performances really do shine. Grant often plays lovable and kind characters, so this casting against type really works to keep us wondering. I was particularly impressed with Sutherland, whose patrician air can turn into menace on a dime. And young Jupe delivers a performance beyond his years. David E. Kelley is the writer behind a long list of successful TV shows, from L.A. Law to Doogie Howser, M.D., to Chicago Hope to Ally McBeal. He also wrote seven of the Big Little Lies episodes. He's reliably good. And Susanne Bier is a wonderful director for this story that's crying out of a woman's sensibilities. She also directed Bird Box (2018) and The Night Manager TV miniseries (2016). She knows how to move the camera and get compelling performances out of her actors. This is worth the watch, and now that all six episodes are out, you're free to binge your weekend away!

Anna We watched over the six weeks as opposed to a binge, which in a way lets you appreciate the story more. I love a binge, but sometimes it's good to be reminded what it feels like to actually have anticipation week to week instead of immediate answers. That said, if I were coming to this show when all episodes were out, I most certainly would have watched them one after the other. Kelley has shown his talents in the past with all the shows you mentioned, and his brilliance continues here; it's just a solid piece of work forward and back. As soon as you start to feel confident in what you think the real story is, a new twisty turn happens, and we're right back where we started. The crux of the story comes when Jonathan goes to trial. He goes on the stand and pleads his case—he was simply a man in love who fell into a bad circumstance. But what comes after is the shocker of the series, and it keeps you on your toes until the very last scene. This series is more than worth a watch. In fact, I may even give it a second viewing. Δ