Deyo Dances sparks conversation between musicians, dancers, and the audience

To Lisa Deyo, there is no sound that cannot be music, no movement that isn’t a dance.

The choreographer, whose annual Deyo Dances showcase hits the Spanos Theatre on Friday, April 13, frequently employs found sounds and a highly eclectic musical lineup in her pieces. This year’s show alone features Catalan folksongs, a looped conversation, Enya’s “Orinoco Flow,” the Mamas and the Papas, the Violent Femmes, and many intriguing riffs on “Mary Had a Little Lamb” performed by live jazz musicians. 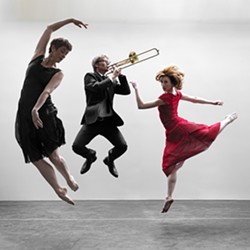 The evening begins with “My Village,” a wonderful series of vignettes that opens with a folk dance set to a recording of Catalan children and their parents singing traditional songs. (Deyo’s brother and sister-in-law live outside of Barcelona, she explained, and the recording of old folk songs was created as a fundraiser for their children’s school.)

“It’s extremely raw,” she said. “But I liked it because a lot of people here are not familiar with Catalan language, so they’re not sure what it is.”

The resulting effect is one of vague, comforting universality; we may not be able to identify where “My Village” is, but we are sure it’s a pleasant village, rich in culture and community, and that warms our hearts. That many listeners cannot immediately place it geographically makes the dance feel more like an ancient archetype shared by all, rather than a tribute to a region in northeastern Spain.

“I tried to pick music that was very easily accessible,” Deyo explained. “And because I’ve gotten them comfortable, then I can serve them something a little bit more spicy.”

We witness a marriage between two lovers, danced by Civic Ballet Artistic Director Drew Silvaggio and the exquisite Harmony True. Later in the piece, as the music shifts dramatically to the Violent Femmes’ “Like a Blister in the Sun,” we see the pair in a drastically different light: Silvaggio walking dazedly forward, seeing nothing, as True dances maniacally, schizophrenically, around him.

“‘My Village’ is looking at all the different facets of a functioning community, and how necessary all the parts are, and how different they are, but also how they are interdependent,” Deyo explained.

Finally, I have to break down and ask: Seriously, what is up with “Orinoco Flow (Sail Away)”?

“I had the ideas for the characters for this piece in my mind, so I was looking for music to go with that character, and for whatever reason, when that song came on, I was like, ‘This is perfect—No, I can’t use this! I can’t!’” Deyo exclaimed.  “But I find that I have to. When that happens, I can’t ignore it. I don’t know what that thing is, but I feel that when I make my best work, it’s when I don’t censor that thing.”

Admittedly, the song does seem to fit the scene, as dancers sway dreamily across the stage, arms in the air.

“It’s really fun to move to,” Deyo added. “It’s cheesy and cliché and completely appropriate for that moment.”

“My Village” is followed by “The Red Shoes,” a three-minute dance Deyo was inspired to create after witnessing people’s reactions to her daughter’s sparkly red shoes.

“Sketches on the Spectrum,” which premiered a year ago at Ballet Theatre SLO’s Arts for Autism Gala, opens to an ostinato by autistic cellist Aksel Slobodnik, which gives way to a looped conversation, emphasizing the autistic tendency toward repetition.

“Say, ‘I love you,’” an adult voice admonishes in the sudden silence.

The dancers move in unison to the cadence of the words, then break away into their own frantic movements. The repeated syllables push the limits of the audience’s patience the way autistic children do their parents. Soon the words are mere sounds. Then, at last—we hope—an invisible line is crossed. What was, one minute ago, an annoyance, becomes strangely comforting. We accept and allow the verbal repetition. The I-love-you loop reaches an eventual end, and Rosemary Clooney’s soothing “Hey there” takes over.

The piece is “told from the point of view of people who interact with, fall in love with, or pass by an autistic person,” Deyo explained.

The dance features an autistic character, which in this version is danced by Deyo herself.

But the best part is the evening’s finale, a piece called “DYLMH(a)” and pronounced “dilemma.” The piece is most accurately described as a conversation between two different languages; throughout several vignettes, live jazz musicians interact with dancers, their movements across the stage often just as choreographed. Sometimes the two seem to get along amiably; other times they antagonize and boss one another, each side struggling for control of the performance. In most cases, the song being played is “Mary Had a Little Lamb,” but as it’s never been heard before, morphing from a stilted children’s song into swanky, smoky number, and then into a Dixieland tune.

In one vignette, danced by Harmony True and Dana Lossing, with Dave Becker on saxophone, the musician sneaks up behind the two dancers and lets out a cheeky “BWOMP!” startling the women, who then look reproachfully behind them, as if detecting a very foul smell. Becker then starts playing “Mary Had a Little Lamb” terribly, and the dancers start to leave, but he woos them back with a startlingly, sweet version.

“In really good jazz music,” Deyo explained, “you always know where the melody is, and they always bring you back to that. And then it feels safer, you can take off on these wild tangents and know that that home is still there and you can come back to it.”

The same applies to her choice of music—which was, she adds, the first recording made by Thomas Edison.

“We know where home is,” she continued. “Home is ‘Mary Had a Little Lamb,’ and everyone knows it. It’s easier to stray from it, because we always know where home base is.”

In another vignette, clarinet player Lauren Wasynczuk performs a piece called “Ku Ku” while a circle of dancers around her move spontaneously. They seem not to see one another, each in her own pool of light, but are all connected by the sounds to which they move.

The finale features a performance by Mark and Amanda Rounds, and their children, Louisa and Jess. As his son plays guitar—“Mary” again—Mark stands in the center of the stage, speaking the words to the song as wife and daughter dance around him. When Jess starts riffing on guitar, his dad begins talk-riffing on the song’s lyrics, free-associating for a good 10 minutes about a girl named Mary he met once, or the lamb he ate for dinner a few nights ago.

But eventually, the music wanders back to the original melody, and the family pulls their father offstage. It’s time to go home.

Everywhere that Arts Editor Anna Weltner went, her readers were sure to go. Contact her at aweltner@newtimesslo.com.