The Village Greek and Mediterranean

Denizens of South County rejoice, for falafel and shawarma are just around the corner! On March 21, San Luis Obispo’s most popular Greek and Middle Eastern restaurant, Higuera Street’s own Jaffa Café, opened a second location in the Village of Arroyo Grande. The new location is owned and operated by Ali and Wendy Saleh, respectively the brother and sister-in-law of Adnan Saleh, the owner of Jaffa’s original location. After the Saleh brothers moved to San Luis Obispo from San Diego in order to found the original Jaffa, which was established exactly a decade ago in 2002, Ali worked for his brother where he trained all of that location’s current chefs to prepare Mediterranean food. After San Luis Obispo’s location gained popularity and momentum, the Saleh brothers were asked by customers throughout the county to open another location. The new Jaffa location currently has six employees, compared to the San Luis Obispo location, which has nine. 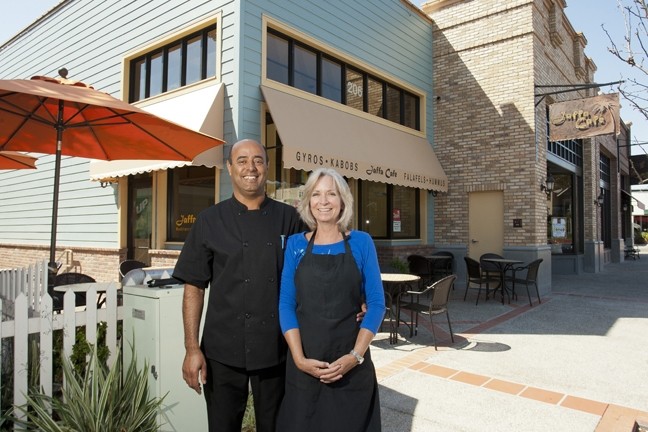 Jaffa’s location in Arroyo Grande is essentially the same size as its predecessor, featuring a strikingly different, slightly more upscale décor than the Jaffa Café location in San Luis Obispo, as well as more emphasis on Mediterranean art and a flatscreen TV. Unlike SLO’s Jaffa, which has little outside seating, the new location contains a pet-friendly outdoor patio which seats a total of 20 people. The indoor setting also has considerable space, seating a total of 62-64 customers. However, the new location’s food, recipes, and menu are basically the same, including the Middle Eastern dishes of falafel, gyros, shawarma, tabbouleh, pita, baba ganoush, and hummus, with the minor exception that unlike the original location, it serves no tortilla wraps. Now Arroyo Grande’s residents can finally enjoy the delicious falafels and gyros that Jaffa has been cooking in San Luis Obispo for over a decade.
Jaffa is very welcoming to the community in Arroyo Grande, which previously lacked a Mediterranean restaurant. Ali promises all first-time customers a free piece of baklava, a rich, tasty Middle Eastern dessert.  Jaffa also supports local farmers, purchasing many of its vegetables and spices such as yellow squash, zucchini, mint, and oregano from the Arroyo Grande village’s farmer’s market for use in its cuisine. Jaffa is open seven days a week, operating from 10:30 a.m. to 8 p.m. on Monday through Saturday but opening at 11 a.m. and closing early at 5 p.m. on Sundays.

Like its predecessor, the new location also has a Yelp profile, which has already achieved 24 reviews from customers, all of whom give Jaffa four or five stars and an enthusiastic response to the restaurant’s service. As one customer, Sarah B. of Grover Beach wrote in her review, “We received our order quickly, and the Lamb Shawarma was like stepping into Mediterranean heaven! The pita bread was fluffy and soft, the sauce was divine, and the lamb simply melted in my mouth!”

Jaffa is located at 206 E. Branch St. in the Arroyo Grande village, and can be reached by phone at 202-2080 or at their website, jaffacafe.us, which contains information on both locations and links to each location’s respective Facebook page.

Suspended Motion Aerial Arts will be hosting a student showcase on Aug. 25 and 26. Tickets are $10 and there will be Suspended Motion T-shirts available for $5. Suspended Motion will also be hosting a play day in San Luis Obispo’s Meadow Park on Saturday, Aug. 18 from 11 a.m. to 4 p.m. Yoga and aerial acrobatics instructor Paige Wyatt recently opened up two more open studio timeslots for students, from 3 to 5 p.m. on Tuesdays and Wednesdays. For more information and a schedule of future Suspended Motion events, go to suspendedmotion.net or call 549-6497.

There will be a fundraiser for the Elm Street Off-Leash Dog Park on Aug. 18, 10 a.m. to 2 p.m., featuring dog demonstrations, a barbecue, a parade, pet-related vendors, dog certifications, a gift raffle, contests for the cutest dog and owner-dog look-alikes, activities for children, and more. Elm Street Park is at 380 Elm St. in Arroyo Grande. E-mail info@fivecitiesdogpark.org or call 550-5334 for more information.