The voice in the stone

It wasn’t Michelangelo’s David that struck choreographer Diana Stanton on her honeymoon in Florence, but his unfinished masterpieces, known as the Prisoners.

These marble figures, which today line the hall of Florence’s Accademia Gallery, do seem to be trying to free themselves from the crushing paralysis of the stone, their faces and limbs reaching desperately out of its crude anonymity. Michelangelo saw the sculptor as the tool of God, simply revealing the creatures that had all the while lived inside the marble, and once he’d begun, he often worked for days without sleep. In the Prisoners, his struggle is personified: the poignant and terrible in-between; the itch to be free.

What Stanton, a Cal Poly associate professor of dance, saw in the Prisoners became the basis for her 17-minute dance piece “Free the Captives.” The work is set to premiere at the annual performance of Variable Velocity, the San Luis Obispo modern dance group co-founded by Stanton and fellow choreographer Jude Clark Warnisher. Voices is the theme of this year’s showcase, which opens Friday, May 31, at the Spanos Theatre. Like most themes chosen by the experimental group—whose work is rarely literal or story-driven, and certainly never obvious—this one may not be visible on the surface. Themes in a Variable Velocity concert seem to serve more as a creative jumping-off point for choreographers, from which widely different works might emerge. Last year’s production Inside Out, for instance, could have been interpreted in the vein of thoughts becoming actions, or the interface between intimate and public life, or the potential for artists to create something bigger than themselves. This year’s Voices is both literal—the music of Bjork and the primal cries of artist/choreographer/composer/vocalist Meredith Monk soundtrack some of the pieces—and figurative.

Clark Warnisher developed her work “Other Voices,” for example, by providing each of the five other dancers in the piece (Clark Warnisher dances in it as well) with a written assignment about finding their voices. The raw movement each dancer came up with in response to the assignment was then crafted into a solo. The differing choreographic voices present in Clark Warnisher’s piece, she said in a phone interview, are a representation of the conflicting voices inside herself. And just like many voices make one complete work, one could go on, so a person is the product of many conflicting thoughts, desires, and experiences. “Other Voices” opens with Clark Warnisher’s performance of her original spoken word piece. 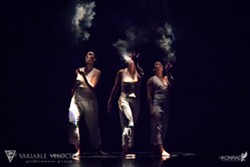 Clark Warnisher’s collaborative technique, she said, is the result of necessity. After turning 50, the choreographer found it more difficult to create work by physically doing it, and thus began the approach—now common in the dance world—of tapping her dancers’ athletic and intellectual abilities and working together to shape a new piece.

David Capps, who was Stanton’s adviser and mentor while she was a graduate student at the University of Colorado, created his wonderful piece “Night Flight” in much the same way. The piece, set to Chopin’s “Nocturne in D Flat Major,” premiered last winter in a concert presented by Orchesis, the Cal Poly dance company directed by Stanton. “Night Flight” also came into existence as the result of a series of assignments given by the choreographer to the dancers. The movements they came up with were filmed and sent to Capps, now based in New York, who crafted what he called “a meditation on complex choreographic procedures, the beauty of stillness, generosity of weight and breath, and capacity for listening and doing at the same time.”

“Night Flight,” when I saw it last winter, felt in many ways like a flirtation with the unknown. In one moment a dancer appeared swarmed by a group of low-crawling creatures. She attempted to escape, but eventually fell into them, giving in. Others, standing upright on the stage, leaned back with a look of surrender, but were delicately pushed back to standing by another dancer behind them, as if guided by unseen forces.  “Night Flight” begins and ends in silence—that is, save for the audible breathing of the dancers, and the pounding of bare feet moving in unison, often forming angular shapes across the stage.

Though its theme gives it some cohesion, this year’s showcase is one of the company’s most eclectic, with more guest artists than usual lending their voices to Voices. Longtime Variable dancer Horacio Heredia will present “Echoes,” danced by Billierose Kleinbauer, Kaitlyn Bramble, and Jennifer Cameron. Seattle-based dancer-choreographer Wade Madsen, whose “Water” was performed by Orchesis last February, will perform his original solo piece “Leaving.”

Christy McNeil, who joined the Cal Poly Theatre and Dance faculty earlier this year, also worked with Stanton as a dancer and choreographer in February’s performance, Suspension. McNeil’s piece “Stop, Collaborate, and Listen” unleashes her inner hip-hop artist, she says. Featuring music by Philip Glass as interpreted by Tyondai Braxton, the piece at first employs a movement vocabulary that is very “modern dance”—very angular and precise. Then the dancers pull on their tennis shoes, and the choreography turns significantly groovier, with some body rolls in there, and maybe a booty pop or two.

Stanton’s restless, multidimensional work “Free the Captives,” set to music I can only hesitantly describe as medieval pop, is presented around a scrim on which watery patterns are projected, a nod to Michaelangelo’s colleague Giorgio Vasari’s observation that his sculptures emerged from the stone “as though surfacing from a pool of water.”

The opening piece “Crazy Voices Inside My Head,” the one to employ the vocal magic of Meredith Monk, was another collaboration for which Stanton and Clark Warnisher shaped and directed the dancers’ ideas. In this case, the performers’ movements appear to tap into something primal—the kind of pure, fearless physical expression that every person keeps inside, and only the crazy ones dare let out. ∆

Arts Editor Anna Weltner sleeps in a stone. Contact her at aweltner@newtimesslo.com.