Nearly one year after New Times first put out a call for artists to participate in Photography Wars, after six months of shooting and editing, two weeks of voting, and a certain measure of controversy (mostly voting related), we are finally announcing the winner. 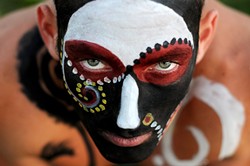 Each category had its own victor. For Challenge 1, GIs and Slide Film, Will Headley garnered the most votes with his entry. In Challenge 2, Forest of Flying Daggers, Kamil Baranowski dominated the field. For Challenge 3, Aftermath and Vino, Brittany App stole the show, winning Challenge 4, Battlefield as well, defeating second place contender Kamil Baranowski by a single vote. In Challenge 5, Self-Portrait, her margin of victory was greater, totaling more than three times the votes of her competitors. And Joseph Gorman and Adrianne Bonafede tied for a first place finish in Challenge 6, Sen Tzu’s The Art of War.

The overall winner, with a nine-vote margin of victory, was Brittany App, proprietor of App’s Photography, who is presently bicycling across the country to raise money and awareness for WaterAid.

All of the photographers merit praise for bravely embracing the unknown, participating in a first-time competition that has not yet been tested, in which there were many kinks and challenges. Their collective body of work is breathtaking, and even more so in light of the hardships both deliberately and unintentionally imposed upon them.