The weight of history: The Wall That Heals comes to SLO County

I don't mean that in a strictly metaphorical sense. Our past has a literal weight. In this case it weighs approximately 8,000 pounds.

How heavy is this? It's the first question I have on March 30 as I walk up to the mirrored black surface of the The Wall That Heals, a three-quarter-scale traveling replica of the Washington, D.C., Vietnam Veterans Memorial that was set up in the meadow outside of the Madonna Inn from March 29 through April 1. 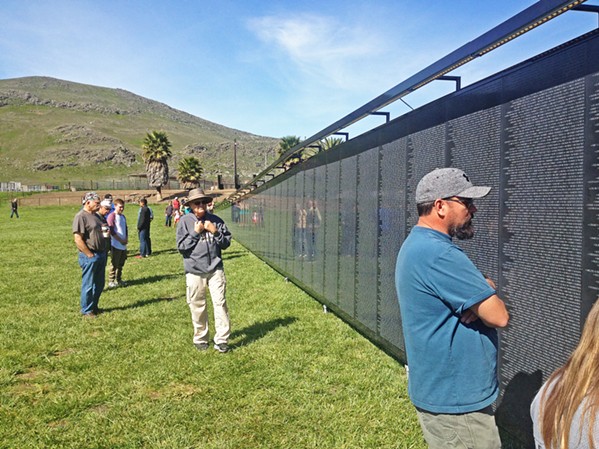 Since I was a high school freshman, I have long had a fascination with the 1960s and 1970s, and the Vietnam War in particular. At the time, I was curious as to what it would be like to live through a time of war, social upheaval, and change. That was just before 9/11. Since then, that era seems less like a distant, dusty history lesson and more like a case study and potential survival guide for the current state of our country.

I start from one end of the 375-foot wall and move slowly down its length. Along the way, its panels grew taller and the names of the service members dead and uncounted for etched into its dark surface—58,318 in all—grew until I stood at its center. At a little more than 7 feet tall, its apex towered over me. A woman next to me runs her hands over some of the names.

"I went to high school with these guys," she tells a nearby docent, who nods. I'm sure it's not the first time someone has said that to him.

I'm again struck by the physical presence of it. It's as if the heavy stone slabs have somehow absorbed the psychic and emotional weight of the war, its cost both in the dead and missing and those left behind to grieve.

The actual memorial wall is larger and set into the ground in Washington, D.C. It is unlike any other memorial before it. When the design was first revealed, it was almost as controversial as the war itself. Some objected to its lack of patriotic symbols. Others objected to its color, calling black "the universal color of shame and sorrow and degradation." Still others disliked that the wall would be sunken into the earth.

"One needs no artistic education to see this memorial design for what it is: a black scar, in a hole, hidden as if out of shame," one letter of opposition to the memorial's design read.

Still, with some compromises, the memorial wall was built. To me, it is one of the most striking war memorials ever created. Maya Lin, the architect who designed the memorial, said she came up with the design based on a memory of watching a stonecutter etch the names of classmates killed in the war into the marble of a memorial while attending Yale University.

She, too, felt the weight of history.

The Vietnam War occurred in an era of upheaval in America. The public was deeply divided over the war itself and the reasons for fighting it. By the time it ended, the war was deeply unpopular and few could argue that we'd been victorious. For years, it seemed as though we preferred to look the other way, something those who came home from that war were all too aware of.

Regardless of whether the decision to go to war in Vietnam was justified, or the decision to stay in the conflict so long was the right one, that war had its price. While it was supposed to be apolitical, the memorial illustrates that price in the starkest possible terms. There are no distractions, just the names. It honors the dead and missing, but also forces us to look and understand what war is and what it does. It reminds us that we are all ultimately responsible for the actions our country takes. It cautions us not to slough off that self-examination or the difficult questions that need to be asked when we are told that the U.S. can, should, or must take up arms.

Today, we remain embroiled in foreign wars and seem at times one angry Tweet away from others. I look at the wall in that green and sunny field and wonder when our bill will come due. When will the weight of our collective decisions settle on our shoulders, and just how heavy will it be? Δ