I think they should be flattered. After all, getting a cease and desist demand from the owners of the Woodstock Music & Art Fair brand means that Castoro Cellars' Beaverstock Music festival—now renamed the Whale Rock Music & Arts Festival—got so successful that owners of the original name of an event that happened 48 years ago decided that a family-owned winery in tiny Templeton on the opposite side of the continent was a threat. Ka-boom! 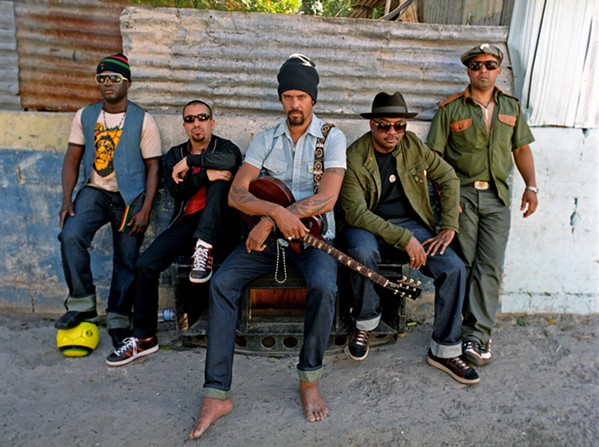 Being forced to rename was probably the best thing that could have happened to Beaverstock because it brought even more notoriety to this increasingly popular music festival, and seriously, Whale Rock is a lot cooler name than Beaverstock anyway. The event takes place at Castoro's Whale Rock Vineyard (1315 N. Bethel Road) on Saturday, Sept. 16, and Sunday, Sept. 17 (daily from noon to 10 p.m.; all ages; $60 per day or $90 for both; available at whalerockmusicfestival.com).

First started in 2013 to celebrate Castoro Cellars' 30th anniversary, the event was supposed to be a one-time thing. "Castoro," by the way, means "Beaver" in Italian, and "Beaver" is Castoro Cellars' owner Niels Udsen's nickname. He and his wife, Bimmer, founded the winery in 1983, and now their sons Luke and Max and daughter-in-law Lauren are all involved. That first Beaverstock event was so popular that the Udsen family decided to keep doing it year after year, in part because it gave them a chance to give back to the community. Last year, for instance, the event raised $18,000 for TIMBA, the Templeton High School Band, and attendance hit a record-high 4,000 music, wine, art, yoga, and community lovers. Over all, the Udsens have raised more than $50,000 for local nonprofit organizations.

"What we've seen with our festival is really authentic organic growth," Luke Udsen explained. "We've essentially built it from scratch and just learned everything along the way. We now own much more of the infrastructure—stage, shade structures, etc.—than in the past, and we basically put it all together with a great tight-knit crew. Each year we add new elements, but all in all it gets easier since we've done it before."

This year's lineup is pretty stellar, and the entertainment is nonstop since the event features two stages in constant rotation. You'll see everything from popular local acts such as Bear Market Riot and Próxima Parada to national touring acts such as headliners Michael Franti & Spearhead and Jamestown Revival. Check the festival website for a complete lineup, but other highlights include Hot Buttered Rum, The Coffis Brothers, and Las Cafeteras.

"This year's lineup is definitely our strongest ever and features a wide variety of genres," Luke continued. "Many of the bands are relative unknowns here outside of Michael Franti, but don't be fooled, they are top notch. For example, The Motet and Turkuaz are arguably two of the best funk groups on the scene, and The Suffers are a soul powerhouse. Jamestown Revival has that quintessential Austin sound with great songs to boot. The lineup really has something for everyone, and both days are equally as strong."

It's a super chill place to hang out for the entire family with a lot more to do than just listen to music. Big hats and sunscreen recommended!

"As always, the atmosphere of the festival is family friendly, laid back, and community oriented," Luke added. "The kids' area has expanded along with yoga and art. We've added a small vendor area with select local vendors. It's a really open, fun place to be."

There's also a very good chance Saturday will sell out, so if you're hoping to see Franti, put the paper down and buy tickets right now! Seriously! Go!

Franti is currently at the top of his game, both artistically and spiritually. The perpetually barefoot performer is in the midst of his Love Out Loud world tour, spreading his message of overcoming the chaos and division in the world with love and understanding. Instead of fighting hate with hate or anger with more anger, he's preaching speaking truth to power but speaking from a place of love and letting compassion lead the way.

"Now is the time we need to love out loud," Franti said on a Facebook video podcast. "That's the roadmap to the future."

He also had a message for counter protestors of recent alt-right demonstrations: "Protests are a form of communication. You can communicate love or you can communicate hate. Right now, Nazis, white supremacists, [the] KKK, alt-right groups, anti-Semitic, Islamaphobic, misogynist, and anti-LGBTQ groups are trying to make hate acceptable in our world. You want to oppose this hate and stand up for diversity and equality? We need you. Online and in the streets. If you are opposing violence, be non-violent. You might be personally angry and want to punch a Nazi. But don't let your anger, your pride, or your ego suck you into a confrontation that gets played on TV over and over again and makes the conversation focus only on violence rather than equality for all people. Right now we need everyone who cares to raise their voices for equality and diversity. Let's stand together and show our strength through our solidarity. Stand up for love."

Franti is surely a man for our times, and the Whale Rock Music & Arts Festival promises to be a celebration of the sort of community of which Franti speaks. 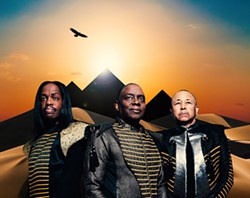 Vina Robles Amphitheatre hosts iconic '70s funk act Earth, Wind & Fire this Tuesday, Sept. 19 (8 p.m.; all ages; $66 to $100 at vinaroblesamphitheatre.com). The Rock and Roll Hall of Famers and Grammy Award-winners are one of the most successful bands of all time, mixing R&B, soul, funk, disco, pop, rock, Latin, and African music into chart-topping hits such as "Shining Star," "That's the Way of the World," and "September."

Since their start in 1970, they've released 23 albums, including eight that sold Double Platinum. Over all, they've sold more than 100 million albums worldwide! They've won nine Grammy Awards! This band is legendary! 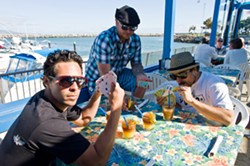 You should also mark your calendar for next Thursday, Sept. 21, because that's when Vina Robles hosts a four-act reggae show with Pepper, Tribal Seeds, Fortunate Youth, and Aloha Radio (7 p.m.; all ages; $40 at vinaroblesamphitheatre.com). These are great alt-reggae acts that are expanding on the Jamaican genre.

Numbskull and Good Medicine Presents have teamed up with Morro Bay's newest nightclub, The Siren, to present Inna Vision and True Zion on Friday, Sept. 15 (7:30 p.m.; 21-and-older; $12 presale at ticketfly.com or $15 at the door). This should be a killer night of reggae and dancehall sounds.

Transport yourself to the Sands Casino in Las Vegas and an evening with The Rat Pack—Frank Sinatra, Dean Martin, and Sammy Davis Jr.—when the Clark Center hosts Diamond Horseshoe Productions' A Toast to The Rat Pack on Saturday, Sept. 16 (7:30 p.m.; all ages; $29 to $46 at 489-9444 or clarkcenter.org). Listen to Sebastian Anzaldo as Frank Sinatra sing "Come Fly With Me," "Lady is a Tramp," "My Way," and "New York, New York." Andy DiMino as Dean Martin will croon "Volare," "Everybody Loves Somebody Sometime," and "That's Amore." And Lambus Dean as the legendary Sammy Davis Jr. will perform "That Old Black Magic," "Mr. Bojangles," and "Candy Man." Classic!

Get down with some excellent contemporary jazz courtesy of The Dave King Trucking Company at Cuesta's CPAC this Saturday, Sept. 16 (7:30 p.m.; all ages; $15 general or $10 for students and seniors at cpactickets.com). King played with The Bad Plus and is now touring with his own group featuring Chris Speed, Erik Fratzke, Chris Morrisey, and Brandon Wozniak. Jazz fans won't want to miss it!

The Kristen Black Band returns to The Siren this Saturday, Sept. 16, for another night of rocking music inspired by Bonnie Raitt, Tom Petty, The Pretenders, The Rolling Stones, John Hiatt, and a whole bunch of other musical heroes to frontwoman Kristen Black (9 p.m.; 21-and-older; free). "The band is always stoked to play The Siren!" Black gushed. "The crew and vibe at The Siren are top notch, the sound and lighting are incredible, and the good people of Morro Bay and Los Osos are always up to rock!"

Arnab Chakrabarty and Sanju Sahai will perform North Indian Classical Music on Monday, Sept. 18, in Cal Poly's Spanos Theatre (7:30 p.m.; all ages; $14 general admission or $9 for students at 756-4849). Expect a program of ragas dating back hundreds of years, rich with improvisation. Chakrabarty will play the sarod, a long-necked, fretless, plucked lute. Sahai will accompany on the tabla, a pair of small, tuned, hand drums.

Dream pop act Winter opens for Cherry Glazerr at SLO Brew this Monday, Sept. 18 (10 p.m.; 18-and-older; $12 at ticketweb.com). Winter, the brainchild of Samira Winter and Nolan Eley, was formed in Boston, but when Samira moved to LA, she recruited Matt Hogan (guitar), Justine Brown (bass), and Garren Orr (drums). Singing in both English and Brazilian Portuguese, the quartet released its first full-length album—Supreme Blue Dream—in 2015 and are currently working on their follow-up, Etherality. Δ